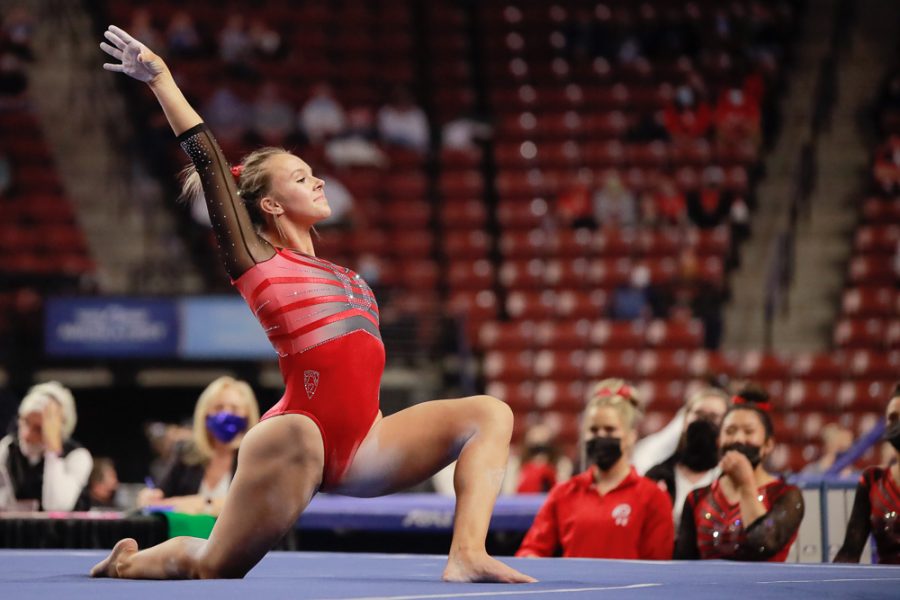 It was a come from behind victory for the No. 6 seed University of Utah Red Rocks gymnastics team on Friday as they punched their ticket to Saturday’s National Championship meet. The Red Rocks will join Oklahoma, Florida and Michigan in the competition for the all the marbles.

OU easily clinched their spot with their score of 198.0875 while the other three teams (the U, Alabama, and LSU) were within reaching distance of each other, and the final spot at Nationals. Utah’s final score of 197.6000 was enough for them to earn the spot.

While beam has been the event the Red Rocks could depend on all season long, the pressure of the big stage got to the young team.

“I think we were all a little nervous, me included,” Maile O’Keefe said post meet. “I have a really good beam routine, I wobbled on some dance, and didn’t necessarily stick my landing and, you know, I got a little frustrated or upset, but there wasn’t … anything [I could do] about that.”

Utah was in fourth place at the end of the first rotation.

They were able to get some ground back in the second rotation when they went on floor. Cristal Isa opened the rotation with the teams first 9.90 of the night and it wouldn’t be the last of the event. O’Keefe, Jaedyn Rucker and Sydney Soloski also posted scores above 9.90 in the rotation.

In the third rotation Utah took to the vault, their weakest event of the season and once again no one cracked the 9.90 mark. Cammy Hall came the closest with her score of 9.8750.

“Three of our one and halves had, you know, slight step backs, and so, [it was] almost like they were trying a little too hard,” head coach Tom Farden said post meet.

There was a shift in the rotation order on the event with O’Keefe starting from the leadoff spot instead of competing third.

But it all came down to the bars and the Red Rocks put on a show. The scores for the team progressively got better with the back half of the lineup consisting of Emilie LeBlanc, Isa and O’Keefe posting scores of 9.90 or better.

O’Keefe’s score of 9.9500 was enough to seal the second place finish for the Red Rocks and also make her a National Champion. Along with bringing the hardware home on that event, her floor score of 9.9625 made her a Champion on that event as well. She will share both of those titles with other gymnasts. Maya Bordas of Cal will also be a National Champion on the bars while Anastasia Webb from OU will share the floor title with O’Keefe.

O’Keefe is the first National Champion on the floor for Utah since MyKayla Skinner won the title in 2017. Georgia Dabritz won the most recent bars title in 2015.

The Red Rocks will have a quick turn around, having a few hours to reset and rest before tomorrow’s National Championship meet. Fans can watch the Red Rocks chase their 11th national title at 1:30 p.m. MDT tomorrow on ABC.