Opening Up the Oscars: ‘Soul’ Explores the Meaning of Life with Groundbreaking Representation 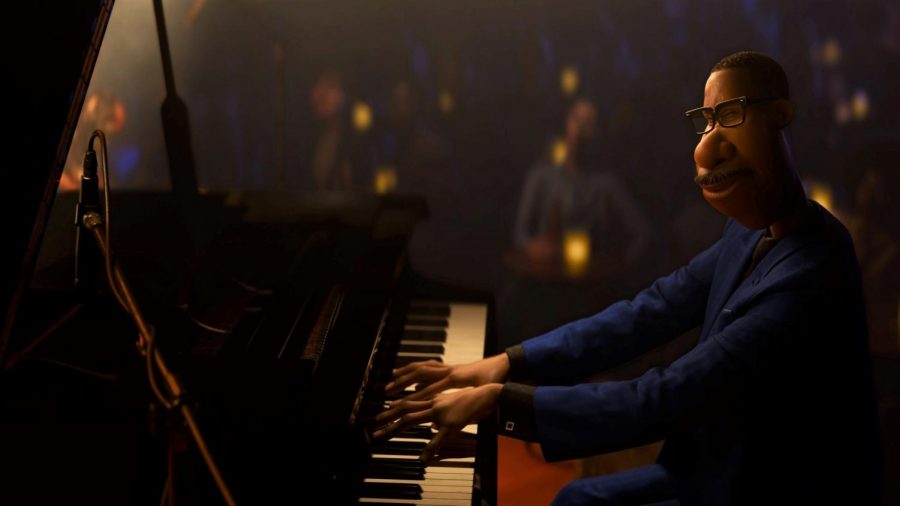 Pixar’s latest film, “Soul,” is a whimsical yet philosophical exploration of human life, finding a purpose and making the most out of your time spent on Earth. “Soul” features Pixar’s first Black lead character — a key step towards increasing representation in film.

On the day that is supposed to mark a big break for his career as a musician, Joe Gardner (voiced by Jamie Foxx) meets an untimely end, and his soul is depicted as heading towards the “great beyond.” Desperate to realize his dreams of playing jazz professionally, Gardner attempts to escape and finds himself in the “great before” — the place where unborn souls receive their personalities and are mentored and prepared for life on Earth. In this metaphysical realm, Gardner meets 22 (voiced by Tina Fey) — a soul that has never been fully prepared for life. Gardner decides to mentor 22 in hopes of gaining the opportunity to return to his body, and in the process, he wishes that 22 will also find her “spark” or passion that means she’s ready for life on Earth.
Searching for the Meaning of Life

Throughout “Soul,” Gardner and other soul-mentors discuss the “spark” as someone’s purpose for living. Souls need to have certain items checked off on a badge before heading to Earth, but 22 has never been able to complete this badge — despite the number of mentors she has run through. Gardner, on the other hand, has discovered his own “spark” in playing piano, but he needs to return to Earth in order to fulfill his dream and act out his life’s purpose. However, as 22 and Gardner learn from each other, they realize that life is not about finding a singular purpose. Living requires appreciating small and beautiful moments — life is worth living for life itself, not for some other end or purpose.

“Soul” effectively translates discussions of existential crises, nihilism and finding the meaning of life to an audience of all ages. Pixar films — and animated films in general — are usually perceived as kids’ movies, but “Soul” is not a kids’ movie. It’s rated PG, so it is family-friendly, but it tells a story and leaves the audience with a message that anyone can enjoy.
Diversity and Representation
Despite the family-friendly nature of these difficult topics, “Soul” has received some backlash over its portrayal of Joe Gardner. Gardner is the first Black lead in a Pixar film, but for the majority of the movie, Gardner is depicted as the green-blue blob of a soul, and his soul also embodies a therapy cat for a significant portion of the film. As one reviewer put it, “Joe is a Black man in his Black body for less than 20 minutes in the entire film.” But voice actor Jamie Foxx said, “Joe represents a lot of people who aren’t being seen right now … Joe is in all of us, regardless of color. To be the first Black lead in a Pixar film feels like a blessing, especially during this time when we all could use some extra love and light.”

Co-director Kemp Powers described that during the animation process, the artists “didn’t want [the characters] to be white characters who happen to be brown-skinned. We had to give them distinct looks, so they’re not just boring, monotone characters.” Powers is also Pixar’s first Black co-director, and when talking about the influx of people of color in the animation business, he said, “It’s sad it’s taken this long, but I’m glad it’s coming finally.”

“Soul” was created with mindfulness at its heart — the animators were keenly aware of Disney’s racist past — but this new film marks a step towards greater representation and equality. It is not free from criticism, but it is still a necessary film in terms of both its story and its significance for racial equality.
On to the Oscars
The 2021 Oscars will take place on Sunday, April 25, and “Soul” is nominated for three different awards — Best Animated Feature Film, Best Music (Original Score) and Best Sound.

“Soul” is my favorite to win Best Animated Feature Film, and I think it is also a strong contender for Best Music (Original Score).

Gardner’s passion for jazz music is palpable throughout the movie with the original score, and this use of music further underscores the trials and tribulations that Gardner and 22 encounter throughout the film. While I have not seen the other nominees in the animated movie category, “Soul” is stunning in terms of its animation work, and the message it leaves for the audience is extremely important.

“Soul” is a beautiful film that tackles difficult yet critical inquiries into the meaning of life — and its use of groundbreakingly diverse characters is a necessary step towards a greater representation of people of color in the film industry.

“Soul” is currently available to stream on Disney+.