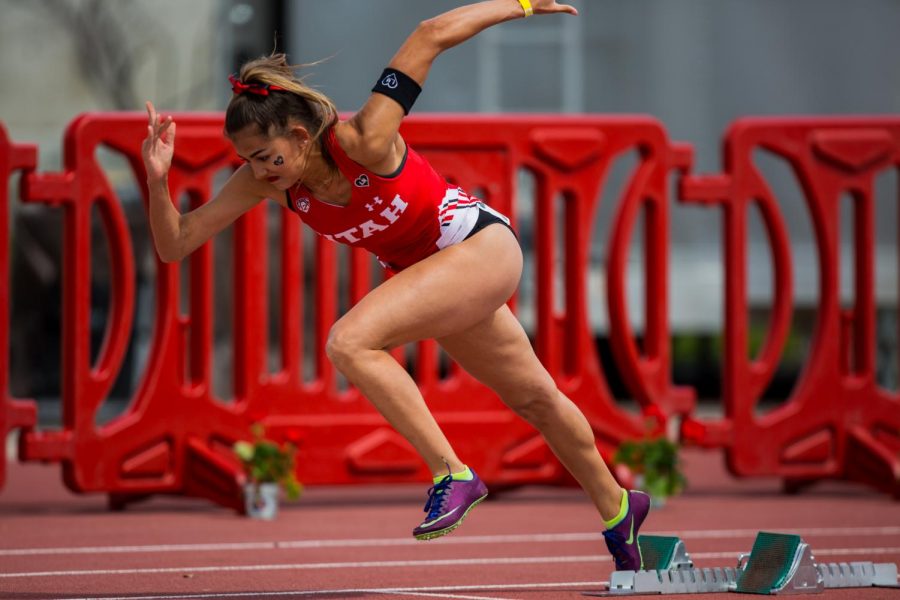 University of Utah junior hurdler Brooke Martin started out of the blocks during the Women's 400 Meter Hurdles in an NCAA Track and Field meet at the McCarthey Family Track and Field Complex in Salt Lake City, Utah on Saturday, April 13, 2019. (Photo by Curtis Lin | Daily Utah Chronicle)

The Utah track and field team split up this weekend, competing in two different meets. The Drake Relays took place in Des Moines, Iowa and the Robison Invitational in Provo, Utah.
Day 1
The competition in Des Moines got off to a good start with the first race, the 4×100, where the team finished with a time of 46.72, qualifying them for the finals. The second event the Utes raced in was the 4×800 where the team placed second with a time of 8:53.26.

“We had a productive weekend, particularly in a variety of relay events,” said head coach Kyle Kepler in an interview with Utah Athletics. “I thought we competed well and handled a multitude of competitive situations well such as running in traffic, prelim/final racing and multiple race distances — which we will all face at the conference meet. A lot to build off of and learn from.”

Overall, this was a solid weekend of performances for the Utes. The track team will be back out competing on April 30 for the West Coast Relays in Clovis, California.