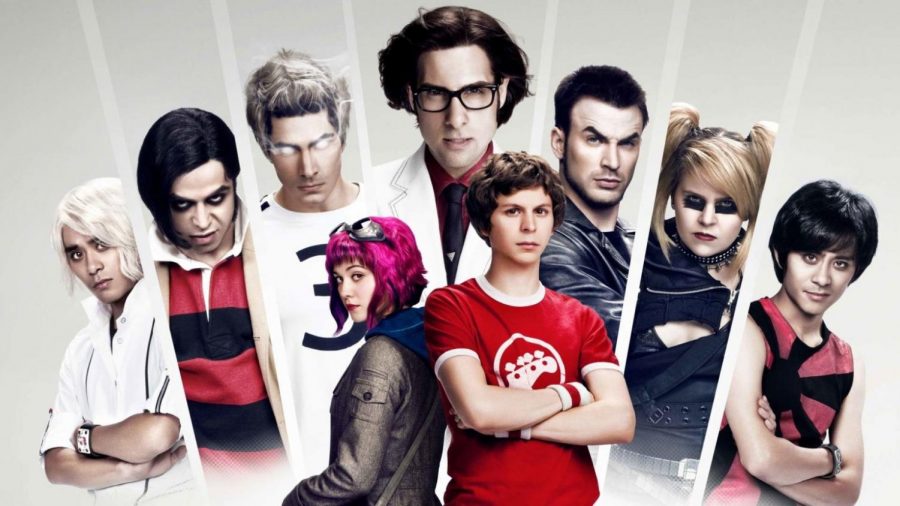 Poster for "Scott Pilgrim vs. the World." (Courtesy Universal Pictures)

It’s been over 10 years since the cult classic “Scott Pilgrim vs. the World” first hit the big screens. The film’s tenth anniversary should have been celebrated last year, but it was postponed because of COVID-19 pandemic restrictions. Now, as movie theaters are beginning to relax their rules and audiences are returning to auditoriums, the film is headed back to theaters for one week starting on April 30, 2021. The theatrical re-release has been enhanced and recalibrated for Dolby Cinema, Dolby Vision and Dolby Atmos with supervision from the original team, according to a tweet from director Edgar Wright announcing the film’s anniversary return.

“Scott Pilgrim vs. the World” follows the story of Scott, a charming, jobless bass player who must compete in a battle of the bands to win a record deal while also fighting his new girlfriend Ramona’s seven evil exes.

The story was originally presented as a graphic novel by creator Bryan Lee O’Malley. He was inspired to create the series and character of Scott Pilgrim after listening to the Canadian band Plumtree’s 1998 single of the same name. Despite the fact that Japanese manga had not yet achieved significant popularity in North America in the early 2000s, O’Malley wanted to write a shōnen-style comic book series. In August of 2004, Oni Press released the first book in the six-volume series.

The film is Wright’s adaptation of the graphic novels and premiered after a panel discussion at the San Diego Comic-Con International in July 2010. It was later distributed by Universal Pictures. Wright, an English film director, screenwriter and producer, is known for his fast-paced and satirical films as well as a signature editing style that includes whip pans and wipes which lend well to the feel and pacing of his films.

The film is set in Toronto and is styled with comic book imagery and 16-bit video game icons mixed in with live-action scenes. The film and the novels match up well, despite a few basic differences like the passage of time — a week in the movie vs. a year in the books; Scott’s initial backstory — he is a bit less of a slacker in the books but still just as hopeless; and the solo victories over the exes — more of the team effort in the books. This close translation from page to screen is partially due to the fact that scriptwriting and production were happening at the same time that O’Malley was finishing the novels, so in many cases, it’s the books that reflect the film, not just the other way around.

The battle of the bands plot uses real bands as the basis for each of the fictional bands. Wright, who is also known for his extensive use of popular music in his films, worked closely with the playlists that O’Malley had written in the back of each comic book to curate these contributions and sounds.

The film failed miserably at the box office, only making back $48.1 million of its $85 million budget. Critics, however, gave it positive reviews and the film eventually garnered a cult following.
Does It Hold Up?
Ten years later, the film still feels light and funny and it’s an enjoyable watch. There are a few moments that fail to meet the social acceptability of today — like the singular use of the “r” slur; a couple of race-based jokes and stereotypes lobbed at the one main Asian character Knives Chau (Ellen Wong); the lack of racial diversity outside of Chau; and the dismissal and slut-shaming of bisexuality. Despite those missteps that may have been more easily overlooked at its release, the film still manages to overcome those errors, albeit only barely, with its style and sound.

Most notably, the film is a comic book movie that doesn’t take itself too seriously, which is sort of refreshing in a time when entertainment is so heavily saturated with very serious mainstream comic book content. This point is also amusing when considering that a few members of Scott Pilgrim’s cast have found themselves in these more serious superhero roles over the past decade, like Chris Evans (Captain America), Brie Larson (Captain Marvel) and Brandon Routh (Superman). The cast also includes other familiar faces like leads Michael Cera, Mary Elizabeth Winstead, Anna Kendrick, Jason Schwartzman and Aubrey Plaza.

The comic book and video game graphics and stylization, and the humor and absurdity of live-action video-game battles make this an enjoyable film, even for those who hate comic book movies.

Tickets for the anniversary screening of “Scott Pilgrim vs. the World” are available through AMC Theatres.