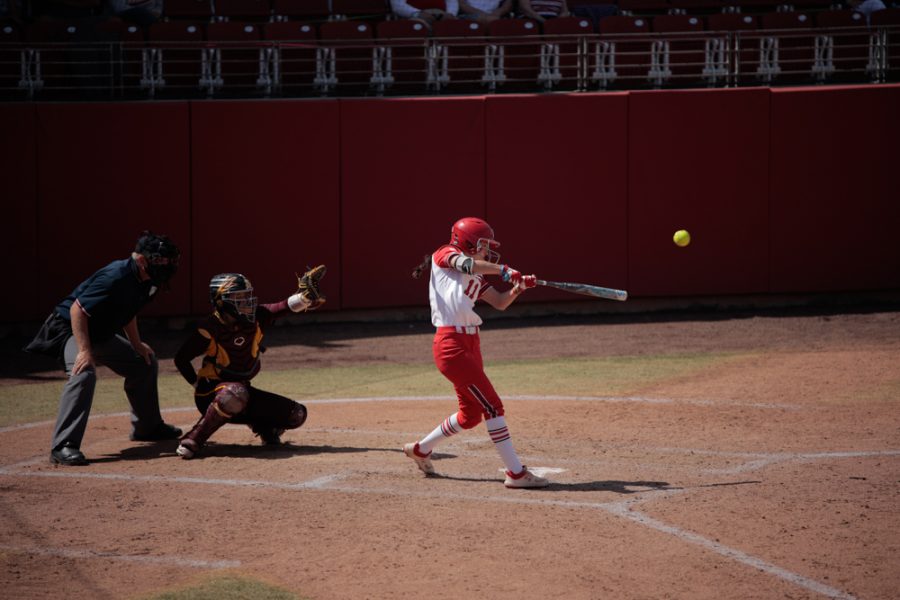 After being limited to three runs in four games against the probable Pac-12 regular season champion UCLA Bruins over the weekend, the University of Utah softball team’s schedule wasn’t going to get any easier with the Utes traveling to the Pacific Northwest to take on the No. 5 Washington Huskies, second in the Pac-12, May 7-9 in Seattle.
Tuesday with Weber
Before the Utes could focus on the Huskies, they had a midweek date against a team that has already clinched the Big Sky regular season crown for the fourth consecutive season in the form of an in-state rival. The Weber State Wildcats (23-15) rolled into Dumke Family Softball Stadium hoping to continue their winning ways.

Playing Weber State for the third time this season, in the third different venue, the Utes didn’t wait for the game to come to them, instead choosing to pounce on the Wildcats early and often. Taking advantage of four Weber State errors, Utah scored three runs apiece in each of the first two innings before being shut out in the third frame. Two more runs in the 4th gave Utah an 8-0 advantage that they would ride through 4 ½ innings to a run-rule shortened victory.

Utah had 10 hits as a team, all 10 coming from hitters 1-5 in the batting order, highlighted by 3-3 days from Haley Denning in the leadoff spot and super senior Alyssa Barrera, including a two-RBI triple from Barrera in the second inning. Denning increased her Pac-12 leading stolen base and hit totals to 31 and 65 respectively. The pair combined to score four runs in the game.

Ellessa Bonstrom benefited from shoddy Wildcat defense and mental mistakes as she reached base in all three plate appearances with two base hits, increasing her team RBI total to 38. Madi Jacobus’ two RBI and another from Julia Noskin rounded out the scoring for Utah in a much needed offensive outburst.

In the circle, Sydney Sandez (11-8) put together a gem of an outing, throwing four shutout innings of one-hit softball. Halle Morris pitched the fifth and final inning, allowing one hit. Kate Donaldson (8-6) took the loss for Weber State.
No. 5 Washington Huskies (35-9, 13-4 Pac-12) 13-1 at Home
The Pac-12 is called the Conference of Champions for a reason. There aren’t any easy opponents in the conference when it comes to softball and the Huskies are no exception. Trailing only the powerhouse UCLA Bruins, Washington has National Championship aspirations and look to continue a magical season against the Utes.

The Huskies don’t have the pitching depth Utah saw last weekend against the Bruins — instead they rely heavily on Gabbie Plain (24-1) to shoulder most of the load in the circle. Plain leads the conference with 24 wins and 261 strikeouts, 70 more K’s than her closest competitor. Plain has pitched 32 times and leads the Huskies with no other pitchers having made more than 13 appearances this year. Plain carries a 1.21 ERA across 161.1 innings pitched and 17 complete games into the weekend series.

Offensively, the Huskies feature five regulars hitting better than .300, led by Sis Bates at .403. Baylee Klinger (.397), has 15 home runs and 24 extra base hits this season. As a team, Washington leads the Pac-12 with 381 hits and 65 doubles. They are third in the conference in triples (9), home runs (60) and RBI (261). Not only are they a power laden bunch, the Huskies show great discipline at the plate, leading the conference with 158 walks and have been hit by a pitch 35 times.
Keys to the Game
Contact: No, not the 1997 alien inspired film featuring Jodie foster and Matthew McConaughey. We’re talking at the plate. Between a rock, Gabbie Plain’s conference leading 261 K’s; and a hard place, their own second worst in the Pac-12 236 strikeouts as a team. The Utes need to be disciplined at the plate and force Plain to come into the strike zone with hittable pitches, and then take advantage of those opportunities.

Free stuff!: Everybody loves free stuff right? Well the Utes have given away too many free opportunities to opponents with their 61 errors this season. The Utah defense must take advantage of every chance they get to convert balls in play into outs. If not, Washington’s powerful offense will have the chance to pile on.

Cure the road woes: The Utes are 7-14 on the road this season including a 1-11 Pac-12 record. This is the final road trip of the season and it’s high time the Utes turned that record on its head. Hammer the Huskies.