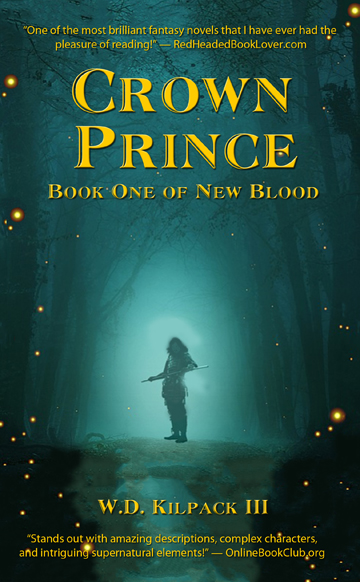 For W.D. Kilpack III, writing is old hat. Receiving his first publication credit at age nine and completing his first fantasy novel at 12, Kilpack is a seasoned pro at spinning stories. It is unsurprising that Kilpack has received constant recognition for his ability. His most recent accolade is being named Author of the Month by the Sinister Soup podcast for his novel “Crown Prince: Book One of New Blood.”

Sinister Soup, a podcast that strives to highlight the best in horror, science fiction and fantasy writing, is hosted by brothers Clay and Travis J. Vermulm. In their eighth episode, released on April 26, Kilpack is featured and interviewed about “Crown Prince” and the subsequent novels in the New Blood saga.
Reality in Fantasy
Kilpack has always had an affinity for both fantasy and philosophy, his writing inspired by the likes of J.R.R. Tolkien’s “The Lord of the Rings” and Homer’s “Odyssey.” With “Crown Prince” Kilpack strives to create a world of fantasy that extends the common traits and tropes of the genre. In the Sinister Soup episode, Kilpack shares his desire to create a gritty and dark world grounded in reality.

Fantasy novels can often provide an escape to readers, and the genre is commonly associated with escapism. Kilpack states true fantasy fans understand the genre moves past escapism and instead reflects their experiences with reality. One of Kilpack’s goals in his writing is to create an emotional and visceral feeling in his readers. He wants us to love hating his antagonists and curse the cruelty of the world when his hero fails.

Anecdotally, Kilpack shares the joy he feels as he reads his work to his wife. Speaking on one of the villains in “Crown Prince” he shares, “I just say the name and she gets angry.” This powerful emotion fuels Kilpack’s writing; he tells his wife, “I just love that you hate him.”
Drawing from Dreams
“Crown Prince,” the first novel of an eight-book epic, follows Natharr, a man with the ability to see parts of the future. Natharr fights to change the events to come while deciding what is avoidable and what is not. The idea for a future-seeing protagonist came to Kilpack in a recurring dream.

Kilpack describes this dream as one where he was viewing events of the future. He describes the pain and anxiety he felt as he witnessed incidents he knew he could never change. The power of this dream could not be ignored and Kilpack began writing. What started as a dream seamlessly became six, then eight books all following the journey of Natharr.

There are currently two books published in the New Blood Saga: “Crown Prince” and “Order of Light.” While Kilpack says the other six books are written, they are still in the editing phase. But I’m sure we can expect more soon. If you’re interested in diving into the New Blood Saga, both books can be found on Amazon.

More information on Kilpack and his work can be found on his website.