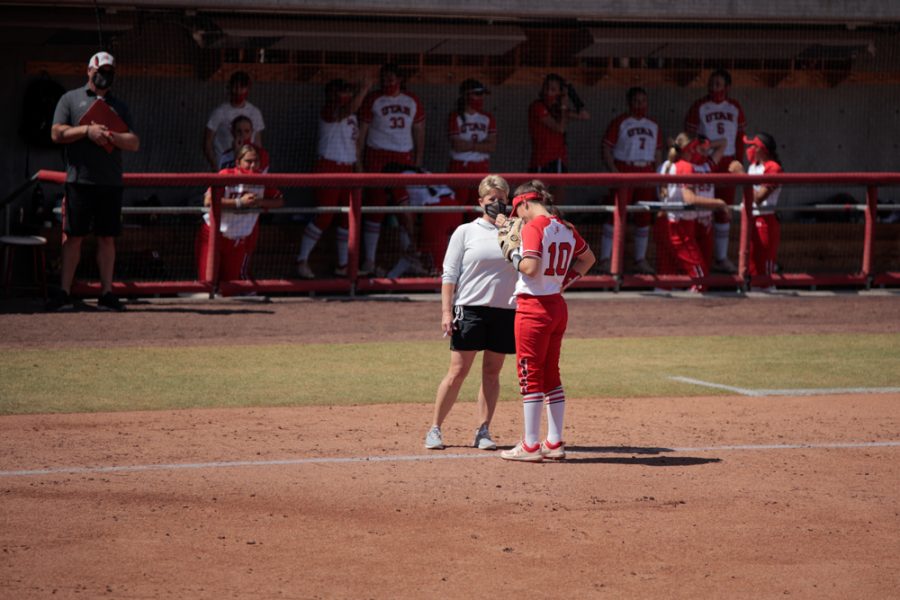 The University of Utah softball team entered 2021 with sky-high expectations. Receiving votes in a variety of top-25 rankings, the Utes came into the season hoping this would finally be their year to rise to the level of the Pac-12 cream of the crop.

Coming out of the gates, the Utes looked every bit like a team that would challenge for conference supremacy. Unfortunately for Utah, conference play didn’t go their way. Elite competition, injuries and a youth movement, which included 15 underclassmen receiving playing time this season, contributed to the Utes struggling in the Pac-12.

Sitting at 20-31 entering a four-game series against the Oregon State Beavers, Utah was hoping to salvage some wins and show the development of that youth movement since the beginning of the season. Along with the plethora of young talent, three Utah seniors and captains Alyssa Barrera, Alyssa Palacios and Julia Noskin would be playing the final games of their Utah careers.
Thursday
Sydney Sandez entered the circle Thursday evening for the Utes and dominated the Beaver offense from the first pitch. Pitching around three Utah errors and five hits and allowing the only Oregon State run in the third inning, Sandez notched her third complete game of the season in a 3-1 Utah victory.

Utah didn’t crack into the scoring column until the fourth inning when a Jordyn Gasper single scored Alyssa Barrera, tying the game 1-1. After a Halle Morris strikeout, Destiny Quiles pinch-hit for Katie Faulk and lined a single to center that scored Ellessa Bonstrom. AJ Militello got the final RBI of the inning when she singled, scoring Gasper.

Three runs would be all Sandez (12-10) needed as she picked up the win. Mariah Mazon (13-16) also went the distance and took the loss.

“Our offense came to play today,” head coach Amy Hogue said in an interview with Utah Athletics. “(Mariah) Mazon is a great pitcher. Our hitters really competed well the entire game. Syd’s complete game win was great to see. She got some big outs especially when there were runners on.”
Friday
Game 1
The Beavers rebounded from their offensive struggles on Thursday with a first inning solo home run from Madison Simon that got the Beavers on the scoreboard early. In the bottom half of the inning, a Madi Jacobus single brought Haley Denning home, knotting the score at one apiece.

OSU recaptured the lead in the second thanks to another solo home run, this time off the bat of Missy Nunes. The Beavers wouldn’t look back, scoring six unanswered runs on their way to a 7-1 win, tying the series at one game each.

Nerissa Eason (2-6) got the win for Oregon State while Mary Beth Feldman (1-5) took the loss for Utah.
Game 2
In the nightcap, Utah used a seven-run first inning outburst and the shutdown pitching of Mariah Lopez to bury the Beavers.

Utah got 12 base hits, their most in Pac-12 play during the 2021 season, including a career-high four hits from freshman Haley Denning. The seven-run explosion in the first came on the backs of two 2-run home runs from Quiles and Militello. Every Ute that batted in the inning reached base at least once as 12 Utah hitters came to the plate.

Oregon State used a Frankie Hammoude solo home run and an RBI double from Grace Messmer in the sixth to cut into the lead, but they were then stymied by Morris coming on in relief of Lopez.

Lopez (5-13) got the 8-3 win, throwing 5.1 innings and allowing three runs. Trystan Malancon took the loss after lasting just two thirds of an inning and giving up four earned runs.
Saturday
The Utes and Beavers got together for the fourth time in three days on a picturesque Saturday afternoon in the Salt Lake valley, with Utah looking to win a Pac-12 series for the first time this season.

Oregon State jumped out to an early 2-0 lead thanks to a 2-run bomb off the bat of Hammoude that easily cleared the left field wall by at least thirty feet.

Both teams would then go scoreless until the bottom of the fourth when the Utes started to find their stroke against OSU starter Eason. Bonstrom led off the inning with a double to right and then scored on a single from Palacios. Eli Espinosa followed Palacios and was hit by a pitch. Utah then loaded the bases via an Militello one out walk. Denning then lifted a sac-fly to left that scored Palacios. Barrera flew out to left to end the inning with the score tied at two.

However, It didn’t take long for Oregon State to regain the lead. Aided by a Utah error, an intentional walk and six base hits, Oregon put a six spot on the scoreboard to take an 8-2 advantage after 4.5 innings.

The Utes loaded the bases with nobody out on two base hits and a walk in the final inning. Barrera scored when Quiles was hit by a pitch. With the tying run on deck, Mariah Mazon struck out three consecutive Utes to end the ballgame.