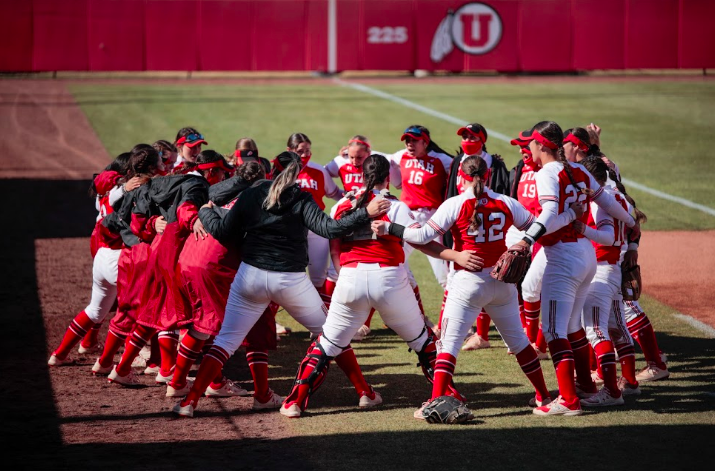 University of Utah Softball team players warm up before an NCAA dual meet against Stanford University at the Dumke Family Softball Stadium in Salt Lake City on March 27, 2021. (Photo by Abu Asib | The Daily Utah Chronicle)

The 2021 season presented more challenges than any in recent memory for the University of Utah softball team. Uncertainty brought on by the COVID-19 pandemic had some wondering if the season could or even should be played. But play they did — finishing the season 22-33, including a 3-21 Pac-12 record. The Utes may not have achieved the team success they expected in the win column, but they appeared to get better every weekend and have a young, talented core coming back in 2022.

While team success eluded them at times, Utah saw three captains graduate and two other players receive postseason recognition from the Pac-12.
Haley Denning – All-Pac-12 Second team
Denning, a redshirt sophomore, spent nearly three years with the Utah program before playing a single game on the home turf of Dumke Family Softball Stadium, or experiencing Pac-12 competition. Denning started all 55 games for the Utes this season, beginning the year in left field before becoming the everyday shortstop in the latter half of the season.

Serving as the primary lead-off hitter for the Utes, Denning did exactly what a leadoff should, get on base. Slashing .391/.848/.453, Denning was an elite table-setter for Utah all season long with her 75 hits leading the conference. Not only was Denning a menace with her slap-hit approach at the plate, she also led the Pac-12 with 31 stolen bases.

“I got recruited for my speed basically, so it’s whatever the team needs in that moment in order to get the win,” Denning said.

That team-first approach allowed Denning to lead the Utes in several offensive categories including average (.391), runs scored (46), triples (5) & multi-hit games (23). Denning finished the season with only three fielding errors in 166 chances.
Ellessa Bonstrom – All-Pac-12 Third team
In her third season with the Utes, Ellessa Bonstrom continued to show exactly why she has been a mainstay in the Utah lineup throughout her career. A super-utility athlete that spent time at third base, first base, shortstop and outfield has been great defensively and absolutely superb at the plate. Bonstrom started 52 of 55 games for the Utes in the 2021 season.

As the most prodigious long ball threat in the lineup, the Utes leaned on Bonstrom to swing the bat with power and drive in runs from the middle of the order. Fifth in the Pac-12 with 14 home runs, Bonstrom also showed off her extra-base hit ability by notching five doubles and one triple. Bonstrom led the Utes with 42 RBI and a .623 slugging percentage. The 14 home runs were the most for a Utah player since 2009. She also ranked second on the team with 22 walks and 37 runs scored.
Seniors
Alyssa Barrera
The only senior to return after last season was cut short, “super senior” Alyssa Barrera finished her career with the Utes with a great final campaign. As one of two Utes to start all 55 games, the steadying presence of Barrera in centerfield and in the lineup was a luxury as head coach Amy Hogue set the lineup each game.

In 2021 Barrera batted .272, collecting 47 base hits. She finished tied for second on the team with five home runs. Her 36 RBI were also second for the Utes.

Barrera finished her Utah career No. 6 in program history, playing 230 games. She also ranks No. 6 in career hits (243), No 4 in at-bats (707) and finished second in program history with 10 sacrifice flies.
Alyssa Palacios
As a team captain, Palacios served an important role as a mentor for a young Utah team; but her role was far more than that.

Palacios saw action in 45 games, including 37 starts for the Utes during the 2021 season. Palacios batted .150 as a senior but reached base at a .299 clip thanks to her 15 walks, good for fourth on the team. She finishes her career with 43 base hits and seven home runs.
Julia Noskin
Were it not for an injury suffered after being hit by a pitch mid-season, Julia Noskin likely would have joined Denning and Barrera in starting all 55 games this year. She served as a pinch-runner in both games that she didn’t start and was an integral part of the second best Pac-12 double-play unit, whether starting at shortstop or second base.

Noskin’s versatility at the plate allowed Hogue the flexibility to deploy her bat up and down the lineup. Her light hitting, contact-based approach resulted in a .270 batting average and 40 hits for the season. Combine that with 24 bases on balls and Noskin finished the season second on the team with a .379 on-base percentage.
Returning
There will be some big shoes to fill in the Utah softball program with the graduations of Barrera, Palacios and Noskin; but the Utes got a big boost recently when starting catcher Katie Faulk announced she would be returning for one more year.

Faulk will take advantage of the extra year of eligibility allotted by the NCAA after the pandemic-shortened 2020 season.

“We are extremely happy to announce that Katie Faulk will be coming back for another season,” said head coach Amy Hogue.  “I’m excited that Katie will be serving that role for our team next season. She will be the only player exhausting her eligibility in 2022, so once again, we will have a young team for her to lead. As our catcher, Katie is an important voice for us on the field. Having a degree in hand and four years of experience competing in the Pac-12, we are excited to have her lead us again next year.”