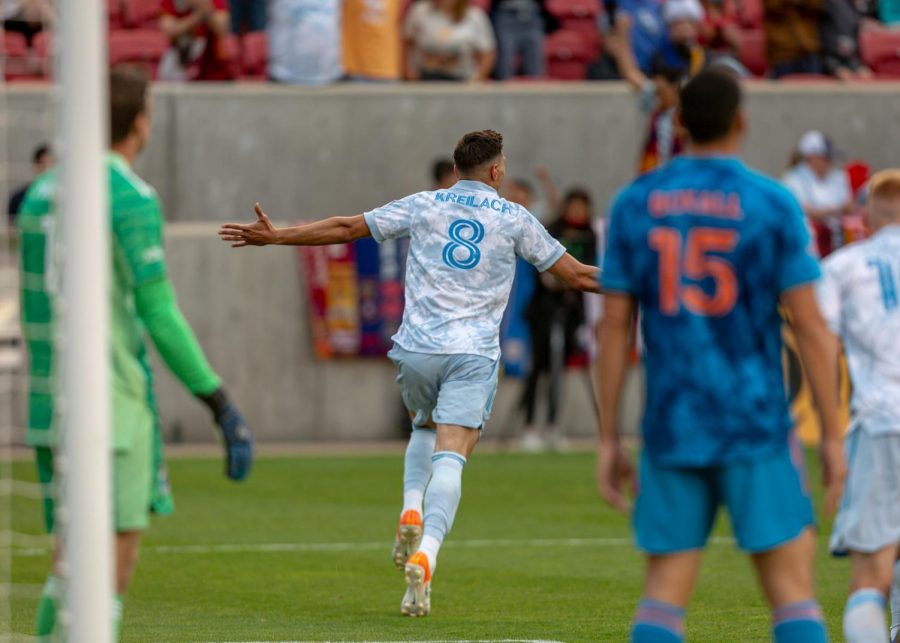 On Saturday evening, Real Salt Lake welcomed Minnesota United to Rio Tinto for their sixth match of the 2021 season. Despite an early lead, scoring in just the 13th minute, Real would concede a late goal and draw 1-1 with Minnesota.
First Half
From kick-off, Real dominated ball possession, maintaining control for the vast majority of the first 10 minutes of the game. The first real opportunity came to the feet of Albert Rusnák in the 12th minute as the ball was delivered just to the top of the box by Anderson Julio. Unfortunately, Rusnák put the ball just wide of the net and out of play.

Despite the miss, Real continued to press offensively and in the 13th minute, Damir Kreilach flicked the ball into the bottom left corner off a cross from Aaron Herrera, giving Real a 1-0 lead.

After conceding an early goal, Minnesota stepped up their intensity and the opportunities started to fall in their favor. In the 27th minute, Minnesota was awarded a corner which provided an initial header and several shots. However, Real defended them well, sacrificing their bodies to block multiple opportunities and eventually clearing the danger.

As play continued, Minnesota took control of the possession with over 50% ball control. Despite the dominant possession, Minnesota struggled to advance into the final third of the field and only had four shots through 38 minutes, though not a single shot was on net.

In the 41st minute, Minnesota had their best opportunity of the first half as the ball found the feet of Jacori Hayes just inside the top of the box. Fortunately for Real, Hayes put it well over the crossbar, resulting in yet another shot failing to find itself on frame.

Over the final few minutes, ball possession went back and forth between the two teams but neither was able to create any dangerous chances and Real would take their 1-0 lead into the locker room.
Second Half
Coming into the second half, Real was able to calm things down and possession leveled out. In the 50th minute, Herrera was again putting himself in a dangerous position, beating his defender and taking a shot inside the left side of the box. However, he too launched it well over the bar and returned possession to Minnesota.

Not long after, on a miscue by Minnesota, both Kreilach and Julio found themselves on near breakaways but were dragged down by defenders. Despite the obvious fouls, the ref allowed play to continue, which was followed up by an earful from Kreilach and a harmony of boos from the home crowd.

In the 61st minute, off a Real corner, the ball went short to Rusnák, who dribbled nearly into the six-yard box before having himself a go. While the effort was impressive, the shot went just wide, finding the side netting and resulting in a Minnesota goal kick.

Over the next 10 minutes, Real did well to not only possess the ball, but to hold Minnesota in their own end as they were awarded multiple corners and had several shots on goal. In the 75th minute, Justin Meram nearly put Real up 2-0 with a shot near the penalty spot, aimed for the upper right-hand corner. While the shot itself was flawless, Minnesota goalkeeper Tyler Miller elevated with his hands outstretched and pushed the ball out of play — easily the save of the game as it kept his team within reach down the stretch.

As play continued, Minnesota found themselves on a counterattack in the 78th minute. Defender Chase Gasper made his way up the left side of the field and sent a cross right at Real goalkeeper Zac MacMath. What seemed like an easy save turned into a disaster as Niko Hansen just barely got his head onto the ball, throwing MacMath off balance and turning the ball into the net, leveling the match at 1-1.

“Obviously that goal was devastating and it’s a bit unlucky, but I thought we had done extremely well up until that point,” Real defender Andrew Brody said. “I thought we responded well after that but couldn’t get the winner despite creating a ton of chances.”

As the match came to a close, Real pressed eight of their 11 players into the Minnesota half. Despite multiple high-quality shots on target, they failed to find the back of the net, resulting in a 1-1 draw with Minnesota.
Notable Statistic
While Minnesota held the possession advantage, controlling 53% of the ball, Real created the more dangerous opportunities, putting five shots on target compared to only one for Minnesota.

Unfortunately, Real was unable to convert on those opportunities and that will need to be an area of focus moving forward as they had every opportunity to come away with the victory against Minnesota.
Up Next
With the draw, Real Salt Lake falls to 2-1-3 on the season and finds themselves in the No. 8 spot in the Western Conference. They will now have several weeks off due to an international break in the schedule. Their next match will be against the Vancouver Whitecaps on Friday, June 18 with a kick-off of 8 p.m. MDT.