‘Half the World Away’ is an Atmospheric Debut Romance Novel 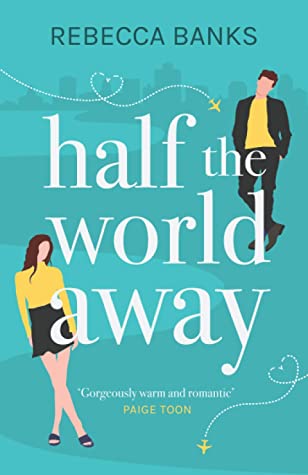 "Half the World Away" book cover. (Design by Lily Wilson | Courtesy Rebecca Banks)

As an avid bookworm, I pride myself on reading from a variety of perspectives and genres. When I was given the chance to read and review Rebecca Banks’ debut novel “Half the World Away” — a romance primarily set in Salt Lake City — I jumped at the opportunity.
A Leap of Faith
“Half the World Away” centers around Abbie Potter, a publicist at a London football club who finds herself traveling to Salt Lake City unexpectedly after receiving a job offer from another team, the Utah Saints. She meets Kyle Miller, a former soccer star turned youth sports scout, and together they explore what a change of pace in a new country may have to offer.

But why choose Utah as a backdrop for a romance novel? The author herself hadn’t visited the state prior to doing research for the book, but Banks decided that the city would provide an excellent catalyst for a romance.

“I just started looking around, and I kind of just picked Salt Lake City out of nowhere,” Banks said. “I thought, ‘It’s a really random place that you wouldn’t really think someone from England would end up, and it’s gonna be kind of a culture shock.’ It’s not the same as going to LA or New York, which are kind of similar to if you’re in London.”

Despite only briefly visiting the state to gather information for the book, Banks created a vivid and lively depiction of Utah — highlighting everything from Liberty Park and the local music scene to the natural wonder of Arches National Park and the strange small-town vibe of Park City during the off-season.

The romance and drama of the book take time to unfold, but in a manner well-done. Watching Abbie and Kyle explore Arches and share experiences in locations that are familiar to Utah locals and tourists alike was incredible. The state shines, and the characters lend themselves beautifully to a romance that proves a central theme in the novel: being happy isn’t about where you are, so much as who you’re with.
A World in Review
This book had such passion for its setting and characters. The character of Rose was particularly enjoyable and so authentic that I found myself wanting to go to Salt Lake and explore the city in hopes of running into someone like her, Abbie Potter-style.

As Banks said herself, the setting became important to the novel. Arches in particular is the backdrop for so many of the novel’s most vivid and whimsically romantic scenes. Her own passion for the location — which she described as her favorite destination during her time in Utah — influences the love that the characters themselves develop for the park during the novel.

This book relies on small moments in a backdrop that is foreign to its central character to create a simple and all-at-once magnificent depiction of Utah and the potential for romance to bloom from small moments. It is this kind of slow-burn atmospheric romance that prompts me to give “Half the World Away” a 3.5/5 star rating.