Pride in Review: The Story Garden 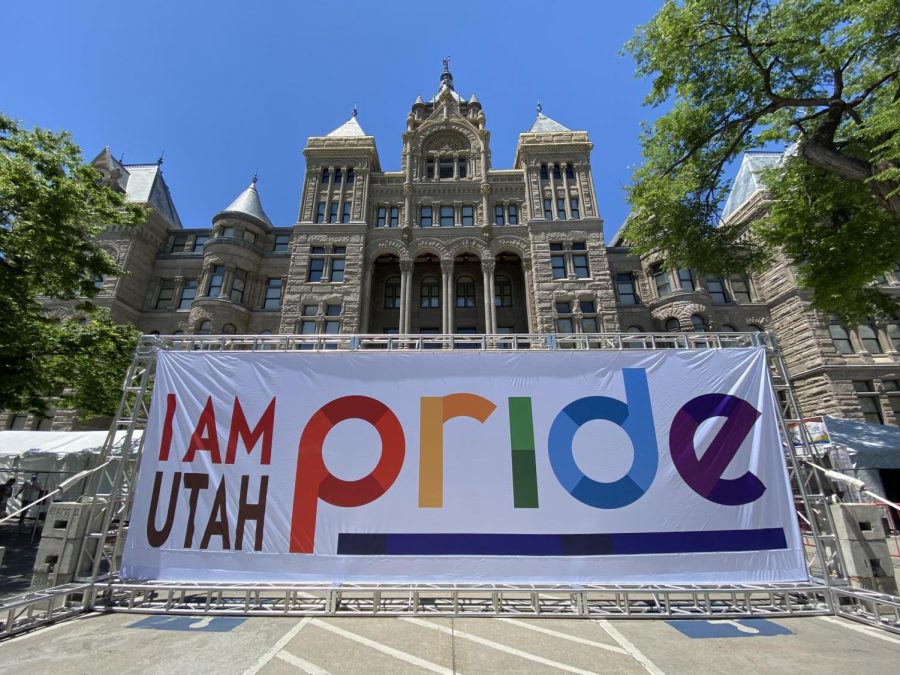 The Entrance to the Utah Pride Story Garden. (Photo by Paige Gardner | The Daily Utah Chronicle)

This year’s Pride looked a little different from years past. In the place of what would normally be the Pride festival, the Utah Pride Center decided to switch gears and promote LGBTQ+ history and culture in a vast, winding maze. The Story Garden featured 20 unique gardens, “each with their own theme to highlight Our History, Our Stories, Our Communities.”

The change of pace was certainly welcome for many reasons. However, it was easy to poke holes in some of the more white-washed, sterile aspects of the Story Garden’s composition and content.
Queer History
The Story Garden made an enormous effort to focus the gardens on LGBTQ+ leaders and histories by devoting much of the space at the event to colorful posters and infographics. The information presented largely depicted timelines or biographies. In a well-meaning effort to avoid an anthropological breakdown of queer nuance throughout human history, organizers chose to highlight people and events closer to modern times.

They chose to begin the “Queer History of Utah” portion by starting in the mid-19th century, around the time Mormon pioneers settled in the Salt Lake Valley. This was the first sign of trouble in an event that ended up being mostly white-centric, G-rated and tended to brush over the perhaps less digestible elements of queer history.

Overall, the historical portions of the garden were not intersectional or especially reflective of the reality that much of the credit for progress made in the LGBTQ+ community is owed to people of color, both in the history-telling and in the language used to talk about queer people and issues.
Queer Art, Education and Resources
Many parts of the Story Garden were locally focused — two major portions of it displayed artworks by local, queer artists alongside artist statements explaining and identifying the work. This was successful in brightening the event and making it more personal. It was also one of the least censored portions of the garden, allowing artists to depict whatever they wanted and giving them a space to talk freely about it.

There were also considerable portions of the garden dedicated to defining and talking about queer language, as well as offering resources for people needing tools for safe sex, mental health counseling and gender-affirming healthcare. However, these resources left even more room for criticism, as there was little focus on the experience of disabled people and even fewer resources to help them. The garden itself was largely inaccessible with few exits and entrances, no seating and the path through the whole garden being mostly on long, bumpy grass. Additionally, queer people are at a greater risk of being harmed by substance abuse, homelessness and police violence but there was little, if any, emphasis on these issues in the garden.
Hope for Change in the Future
As Pride has become increasingly commercialized over the years and has been fenced off for many, both literally and financially, local queer communities have pushed back. This has helped decentralize the celebration of Pride and has drawn attention to problems within organizations dedicated to serving LGBTQ+ people.

Queer culture is constantly changing and Pride is never just celebrated at festivals or in bars. Salt Lake City has a vibrant LGBTQ+ population which will hopefully be the catalyst for the creation of more inclusive spaces and positive change in the years to come.