To Binge or Not to Binge Episode 87: ‘Cruel Summer’ 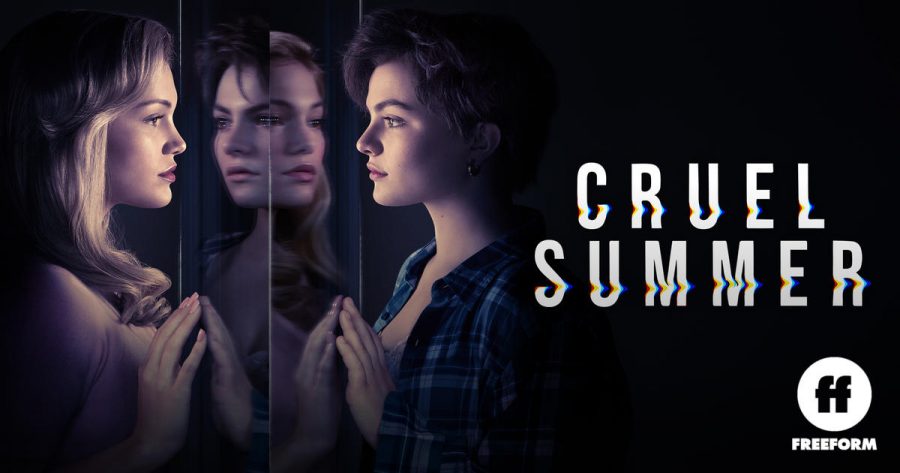 Olivia Holt and Chiara Aurelia face off in "Cruel Summer" from Freeform and Hulu. (Courtesy Freeform)

“Cruel Summer” is a teen thriller television series created by Bert V. Royal on Freeform and streaming on Hulu. The series follows the lives of two teen girls: Kate Wallis (Olivia Holt), a popular and attractive girl who is unhappy with her life, and Jeanette Turner (Chiara Aurelia), an awkward outcast who longs to be popular in the fictional Skylin, Texas.

While Kate is held captive in the home of her high school assistant principal Mr. Harris (Blake Lee), Jeanette seems to take over Kate’s life — becoming popular, befriending Kate’s friends and dating Kate’s ex-boyfriend. Upon her escape, Kate accuses Jeanette of having seen her and done nothing to save her, resulting in Jeanette’s messy fall from popularity to town pariah.

Alternating between the two girls’ viewpoints, each episode focuses on one day in three specific years: 1993, 1994 and 1995. The story pieces together Kate’s disappearance, her escape and the repercussions of her accusations that Jeanette knew more than she disclosed.

As the lawsuits and internal politics of family and friendships unfold and intertwine over these three years, the audience and characters grapple with trying to figure out who is telling the truth and what secrets are hiding just below the surface.

The supporting cast, including Froy Gutierrez, Harley Quinn Smith, Allius Barnes and Michael Landes, builds complex characters and depth contributing to the intriguing twists and turns of the story.
To Binge or Not to Binge
I am not a true-crime junkie or a murder-mystery stan by any stretch of the imagination, but I do enjoy a good mystery from growing up on “Fear Street” and Nancy Drew books, re-runs of “Murder She Wrote” and every possible presentation of Sherlock Holmes I could find.

I really enjoy the tension and puzzles that are centered in thrillers like this and find it exciting to try to solve each case or catch important details. With “Cruel Summer,” I found myself invested in the characters and their relationships to one another and to the primary plot and was constantly excited, looking for clues.

The show employs several strategies to make it easy to follow the story between the time flips. In 1993, before Kate disappeared, the colors are warm and pink — rose-colored in every sense of the phrase. Kate is soft-spoken and delicate with a rich-girl-next-door sort of style. Jeanette is frizzy-haired, awkward and desperately trying to be seen as someone who is interesting.

In 1994, the color palette is neutral and the girls have both shifted in style and personality. Kate appears in grays and blues and speaks with less bounce while Jeanette has straightened her hair, found stylish clothing and seems confident and trendy.

Finally, scenes in 1995 are bathed in blue and every shot is darker. Both girls are bitter and angry, now with shorter hair and careless, grungy styles.

I think that these design decisions in the show set each mood physically and psychologically. The show also positions mirrors through the episodes consistently, leading many fans online to speculate that the mirrors may be a clue to the truth or represent the two sides to the story.

“Cruel Summer” wraps the audience in a web of little white lies and deceptions. While its primary focus is to figure out whether it’s Jeanette or Kate who is lying, there are many things happening on the sidelines that are dripping with hidden agendas and deceit.

I watched and re-watched scenes, following the individual agendas and trying to piece together intentions to determine which lies were character flaws and which were motives.
Best Episode
My favorite episode in the series is episode seven: “Happy Birthday, Kate Wallis.” This episode really turns the tables on the narrative presented in the first episodes. If you thought you had everything figured out, this episode will completely mess with your head.

The episode is from Kate’s perspective and alternates between August 29, 1993, 1994 and 1995. On this day, we see Kate celebrate her birthday and follow significant interactions that shape the plot.

In all three years, Kate has altercations with her mother that lead her to Mr. Harris’ door, the set of a TV studio and familial confrontation respectively.

Each little peek into Kate’s celebrations pick at the threads of the narrative and at the heart of the series and show little ways that the lies and deception are starting to unravel.

There are several reveals and poignant moments in this episode that make it my favorite. It’s a testament to the screenwriters’ awareness of the pace needed to make a story like this keep its momentum without feeling forced or cheap.
Trigger Warnings
This series deals a lot with domestic abuse and the sexual grooming of a minor. A disclaimer warning is presented at the beginning of each episode.

Available to stream on Hulu