Twenty One Pilots Showcase Stunning Style with ‘Scaled and Icy’ 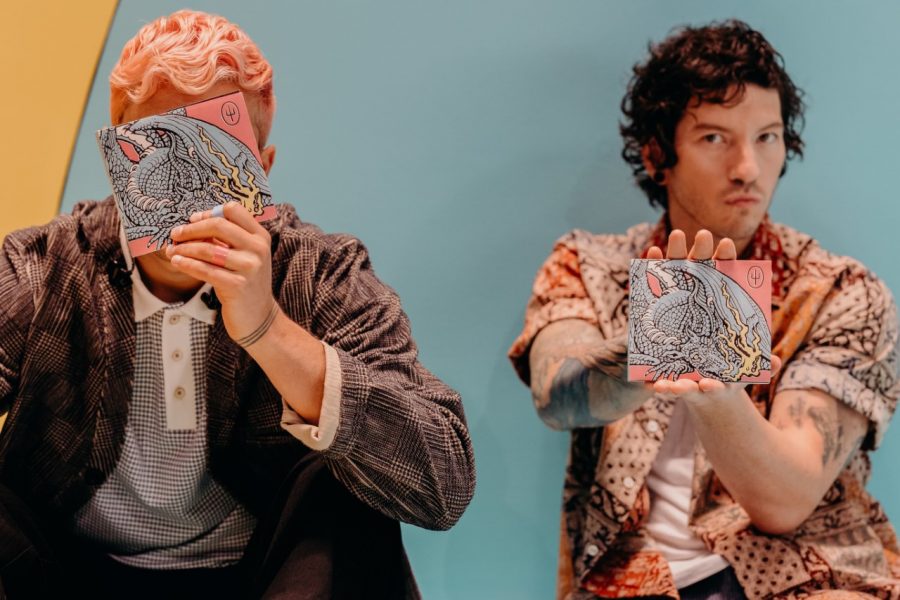 Twenty One Pilots has gained popularity in recent years thanks to the innovative and genre-bending style of their music. The alternative music duo gained traction in 2015 with the release of their album “Blurryface.” Since then, they’ve released “Trench” (2018) — a concept album that sent fans in a frenzy searching for clues posted to the band’s Instagram account ahead of its release — and singles “Level of Concern” (2020) and “Christmas Saves The Year” (2020).
“Scaled and Icy”
The band’s latest album, “Scaled and Icy” was released May 21 of this year and was met with mixed reactions from longtime fans due to its more upbeat vibes and pop influences on several tracks. The cheery sounds and electric blue-pink aesthetics start a new chapter in the duo’s discography, especially following the dark and heavy aesthetics of its predecessor “Trench.”

Musically, the album may be a departure from Twenty One Pilots’ older works, but the album’s lyrics still retain a strangely dark and emotionally raw tone. That familiarity comes from mentions of anxiety, depression and other mental health struggles, which have been themes in earlier albums.
Tracklist
The album starts with “Good Day,” an upbeat and nostalgic tune that finds singer Tyler Joseph detailing unfortunate circumstances. Amid these troubling ideas, Joseph is hopeful for good days and small things to uplift. He sings: “Low-key, I’m alright / Would you say you depend on the weather? / My sunshine / Is a buzz and a light, I’ll be singing out / I know it’s hard to believe me, it’s a good day.”

“Shy Away” offers a poignant look at the struggles of anxiety and the seemingly small things that help to curb discomfort in social situations. “Formidable” — my personal favorite on the album — has the feel of a ballad with underlying anxieties about relationships.

“Redecorate” is the final track on the album. Joseph wrote it after the tragic passing of a friend’s son, and wondered in an interview with PopBuzz what it would be like to have someone pass while keeping their room intact, knowing that they are gone.
The Verdict
As a longtime fan of Twenty One Pilots, I had a lot of hope for this album. It can always be strange to see a band try something outside of their comfort zone. But I hoped for the best. That’s exactly what this album gave me — hope for the future of a band that I’ve been listening to for six years. Some of the songs felt too far away from previous albums, and some elements felt as though they became overshadowed by the overall sound of the record.

That said, this album isn’t such a far cry from the Twenty One Pilots albums of old. While the vibe of this record is different and sees the band at their most popular, they remain concerned with mental health and lyrics that evoke larger meaning. Their lyrical compositions are strong and these new sounds have opened the band to a variety of new audiences and possibilities.