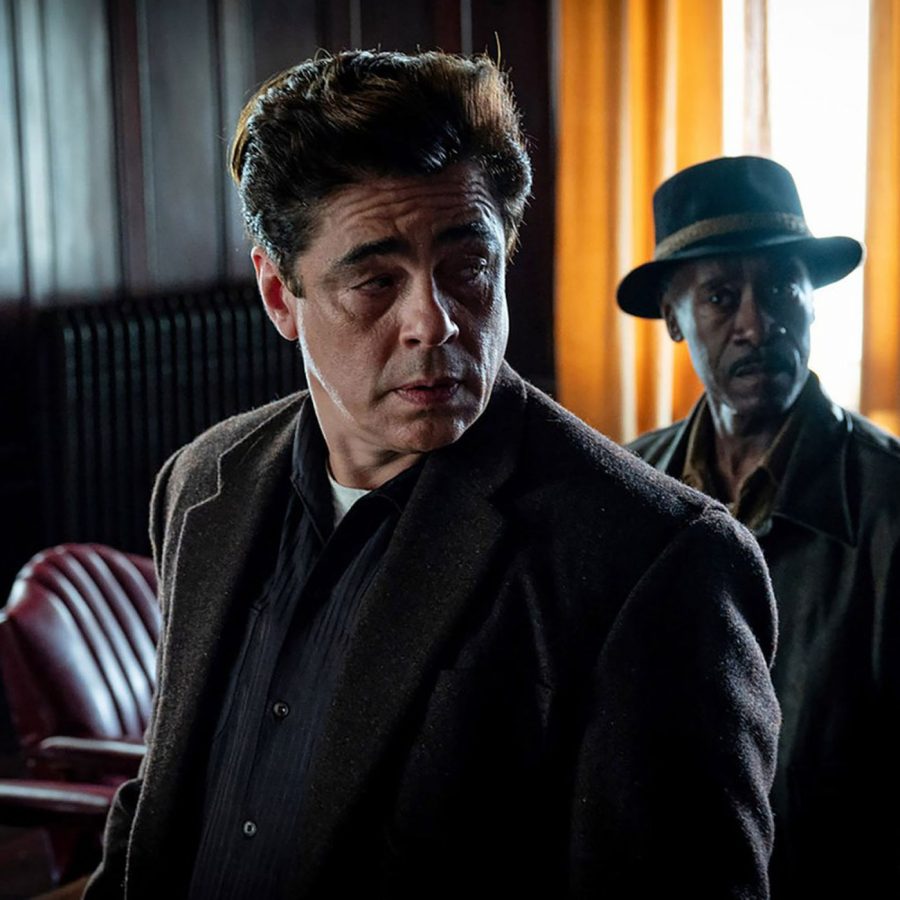 On a nondescript street in a suburban area of Detroit, Michigan in 1954, a family’s morning routine is disrupted by the appearance of three men, masked and armed.

In this tense and terrifying sequence — the best of Steven Soderbergh’s “No Sudden Move” — two of the masked men, Curt Goynes (Don Cheadle) and Ronald Russo (Benicio del Toro) “babysit” the mother and children while the third takes the father, Matt Wertz (David Harbour), downtown to his office building. He is instructed to retrieve documents from his boss’s safe that turn out not to be there.

“No Sudden Move” is a modern update of the film noir style, and as such, double-crosses and makes hidden agendas become almost immediately evident.

The plot is immensely complicated, with overlapping and intermingling plots and schemes that are held from the audience until the very last second, ratcheting up the suspense.

No character is who they seem to be, not the gunmen nor the victims. No one knows what is going on; Goynes’ and Russo’s labyrinthine journey to discover what is happening leads them to places that they never dreamed of when they accepted the mysterious but easy job from Doug Jones (Brendan Fraser).

Like in the classic neo-noir “Chinatown,” a simple job leads to uncovering vast conspiracies, and the film asks its audience to consider the harm people do in the pursuit of power.

Soderbergh, the director, cinematographer and editor of the film, knows his way around neo-noir, having made “Out of Sight,” “The Limey” and “The Underneath.”

The movie shines with confidence and professionalism, but little passion — it feels almost like a noir playhouse. Soderbergh moves the characters around to where they are supposed to be according to the tropes found in noir, but with little question as to “why.” The characters have no life beyond the movie screen — they are only little noir puppets.

Visual Distraction from the Heart of the Action

Many of the good qualities found in “No Sudden Move” were too easy for me to overlook due to what I found to be unpleasant cinematography.

Soderbergh has recently favored wide-angle lenses that make the shot look like the inside of a fishbowl and darken the sides of the screen. This was particularly distracting in a movie that is otherwise trying to emulate the classic noirs of the ’40s and ’50s. One could make the argument that the warped shots reflect an off-kilter and paranoid world, but that only works for so many of them. The warped shots are simply a directorial quirk.

Underneath the visuals is a clever, efficient script that revels in humorous, idiosyncratic details and skilled performances. Those are the anchors of the movie. When Soderbergh gives his actors room to breathe, “No Sudden Move” comes alive and it is exactly the sort of mid-budget adult drama that many complain Hollywood does not make anymore.