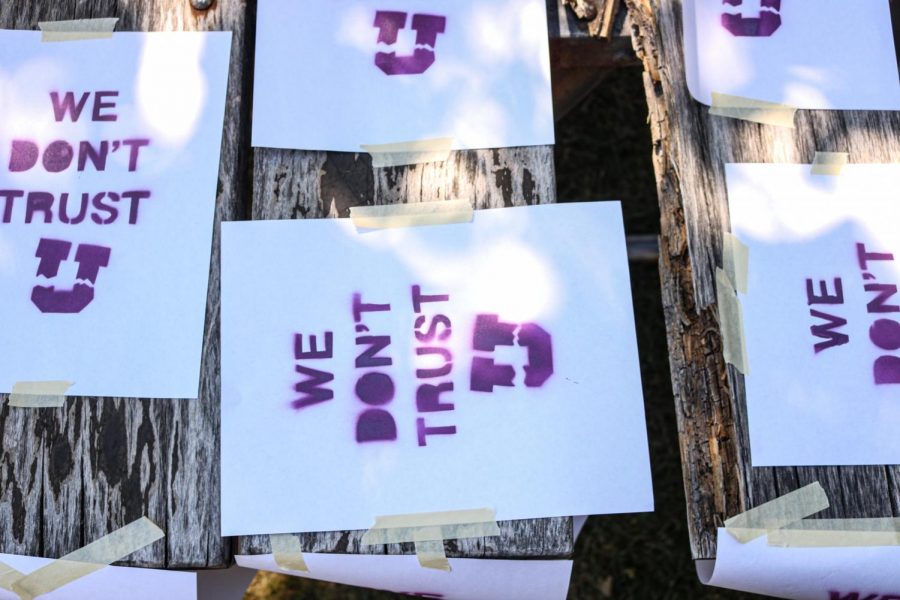 UnSafe U protesters gather at the public safety building on the University of Utah Campus in Salt Lake City to protest the actions of officers involved in the Lauren McCluskey case on Aug. 6, 2020. (Photo by Ivana Martinez | The Daily Utah Chronicle)

In June 2014, Cindy and Butch Moore received the news that their daughter, Breanna, had been killed by her boyfriend Joshua Almeda when dating violence turned to murder. After her death, Bree’s family found out that the warning signs were there the whole time.

Bree would come into work with black eyes and her boyfriend made her delete her Facebook. He had even been abusive to a previous partner. But no one wanted to get involved or speak up.

Now, Bree’s family fights to teach young people about dating violence so they can better recognize warning signs. They even successfully teamed up with Alaskan legislators to pass Bree’s law, which integrated dating violence education into Alaskan high schools.

Utah needs a bill like this, given that domestic violence calls have seen an increase in the state over the past year. Utah should implement Bree’s Law and start teaching high school students about dating violence.

Relationship violence felt like something that could never happen to me — until it did. And I’m not alone. Nationally, one out of every four women has experienced dating violence at some point in their life. In Utah, that number jumps to one in three women and one in four men.

Intimate partner violence isn’t limited to adults. Teens can be especially susceptible to dating violence. One in three U.S. teens between ages 14 and 20 have been victims of dating violence. Approximately the same amount admit to having committed relationship violence themselves.

Speaking from experience, abuse from a partner changes everything. When I left my abusive relationship, it felt like I had to rebuild my entire life. Survivors often deal with low self-esteem, depression and sometimes PTSD. Domestic abuse stays with survivors long after they’ve left their abusive relationship.

Even more frightening, some people do not survive dating violence. In Utah, 42% of adult homicides since 2000 have been related to domestic violence. Each year, about 80 children witness the murder or attempted murder of their mother. Every time I hear a story like Breanna’s I am shaken by the thought that something similar could have happened to me because I didn’t know how to recognize abuse in my situation.

Because intimate partner violence deeply affects vulnerable teens, Utah should teach high school students about this harsh reality. During the 2021 legislative session, Utah lawmakers failed to pass Senate Bill 229, which would have required Utah schools to teach students about consent and coercion.

This decision shocked many, especially given the years of high sexual violence rates in our state. However, while Utah parents and legislators debate what schools should and shouldn’t teach, the safety of our students hangs in the balance.

A third of Utah teens have experienced an unhealthy dating relationship. Dating violence makes our teens more likely to face depression, engage in drugs or alcohol, develop eating disorders, do poorly in school and even puts them at risk for repeat victimization. We shouldn’t leave our students without the resources to recognize abuse and find help.

Dating violence education truly saves lives. Bree’s Law was signed into Alaskan law in July 2015. In only two years, between 2015 and 2017, sexual dating violence in Alaska reduced by half and physical dating violence decreased from 9.5% to 7.3%. The law specifically teaches Alaskan students how to develop healthy relationships, practices supportive communication skills and teaches the warning signs of abuse and where to turn for help.

Regardless of whether we want our teens to date, they still deserve an education that teaches them how to stay safe if they do. Alaskan legislators saw high rates of sexual and intimate partner violence in their state. They took action to help protect their students. We need to call on our legislators to do the same.

When I was in my abusive relationship, I thought it was fine. It was only after I left I realized what happened to me. By teaching high schoolers about dating violence, hopefully, they can recognize abuse in their friends’ and their own lives where I couldn’t in mine.

Dating violence happens more than we think, and it can happen to anyone. Cindy and Butch Moore never thought their daughter would fall victim. We need to give Utah students the tools to recognize abuse so that hopefully it doesn’t happen to anyone else’s child either.

Author’s Note: If you or someone you know is experiencing abuse, please call the National Domestic Violence Hotline at 1-800-799-SAFE (7233) or visit thehotline.org to chat with someone. For Domestic Violence programs in Utah, click here for a list of organizations to reach out to based on district.