Thoughts From the Pitch: RSL Draws With LA Galaxy 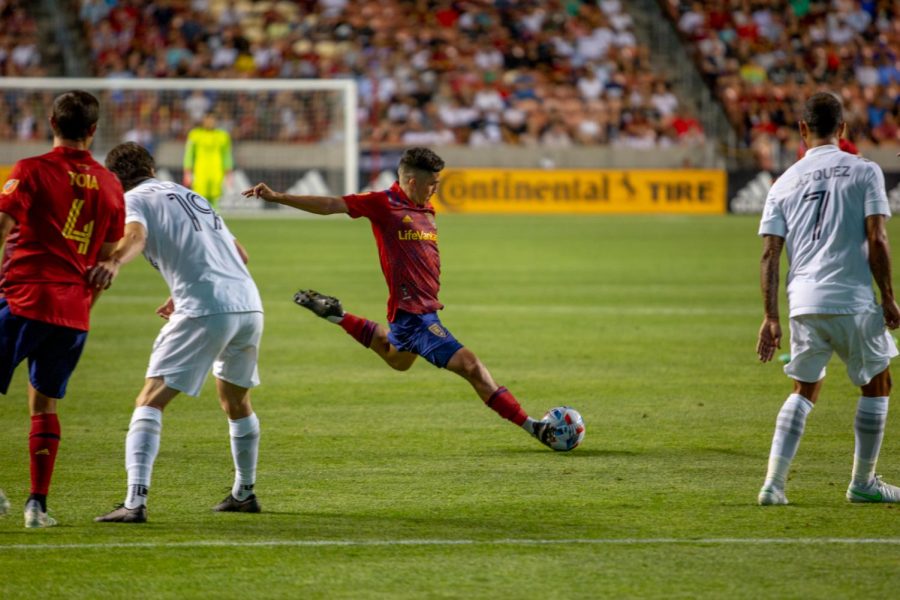 After several weeks away from Rio Tinto, Real Salt Lake welcomed the LA Galaxy to their home field on Wednesday night for a midweek matchup. Despite an early 2-0 lead, RSL conceded two unanswered goals and walked away with only a point yet again for their fifth draw of the season.

In addition to forfeiting a 2-0 lead, several other factors led to Real’s 2-2 draw.
RSL Found Great Success Attacking Up the Wings
The majority of RSL’s attacks came from developments up the wings. Oftentimes they would begin with possession in the backfield and slowly work it up the sides. This not only resulted in multiple shots on goal but was the main reason that Albert Rusnák found the back of the net.

In the 10th minute, this is exactly how they struck first and early as the ball was worked up the right wing and sent into the penalty area where it found Rusnák’s feet. Impressively, Rusnák one-touched it into the back of the net and RSL found themselves with an early 1-0 lead.

COULD THIS BE ANY SWEETER?!

Real continued this strategy throughout the majority of the game, either finessing it up the sides or sending long balls on counter-attacks. While it did produce a large amount of their chances, unfortunately, they were unable to score again from this strategy.
David Ochoa Was Magnificent
While he did concede two goals, David Ochoa was one of the biggest reasons Real walked away with a point rather than none. On multiple occasions, he made top-notch saves which kept Real in the lead and eventually from trailing.

On an LA corner, a Galaxy player put an uncontested header right on net only to be saved by the outstretched arm of Ochoa. This attempt on goal easily could’ve leveled the match early in the second half and may have led to more problems down the line.

Later on, Ochoa was forced to slide his legs through a poor pass back that was nearly intercepted by a Galaxy forward and would’ve left nothing between him and the net. Luckily, Ochoa was on his game and helped RSL avoid a near disaster.

For the match, Ochoa made four saves, all of which were high difficulty and could’ve resulted in a massive Galaxy lead.
LA’s Dominant Possession Eventually Paid Off
While things were looking good early on for Real, the Galaxy maintained dominant possession throughout the match and it finally paid off as they came back from trailing by two goals.

It was clear throughout the game that LA was just better at not only possessing the ball but creating opportunities from it. For the most part, Real looked to counter-attack as they sent a fair amount of long balls and looked to attack quickly up the wings.

On the flip side, the Galaxy would often possess the ball in their own half, finesse it wherever there was open space and attack from all different kinds of angles, scoring first off an incredible shot by Victor Vazquez and then a cross which was headed into the net completely uncontested.

Nearing almost 60% possession at one point, LA was able to outshoot Real 12-10 with six shots on goal compared to Real’s four. While the match did finish with a 52-48 difference in possession, the Galaxy dominated for a majority of the game.
A Look Ahead
The season continues to be frustrating for RSL as they’ve led in many of their draws but have been unable to hold on to their leads and instead of grabbing three points, continually come away with just one. With the draw, Real finds themselves with a record of 4-5-4 and eighth in the Western Conference. They’ll have a quick turnaround as their next match is against rival Colorado on Saturday, July 24 with a kickoff of 8 p.m. MDT.