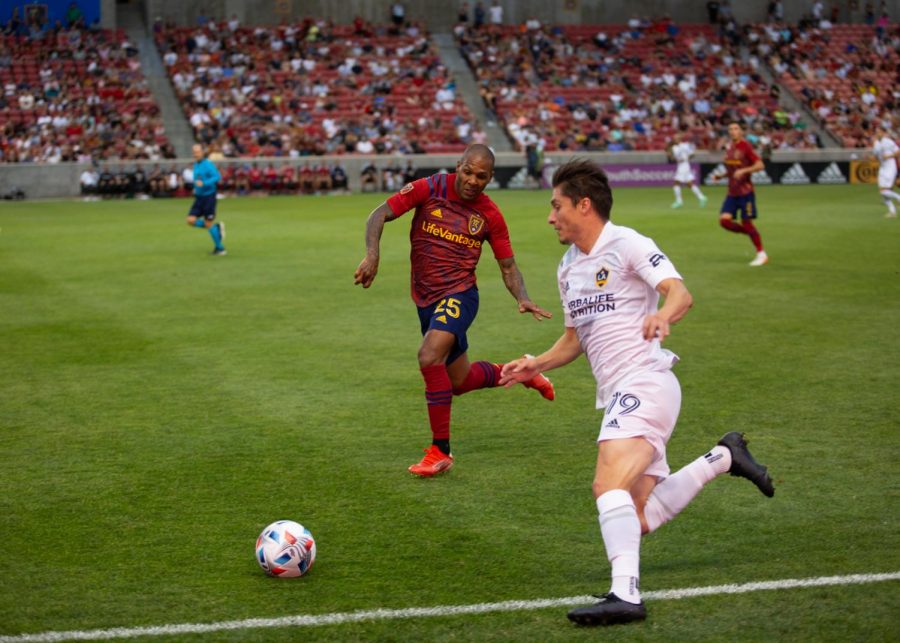 Coming off of a 2-1 road loss to LAFC, Real Salt Lake returned home for two matches against opponents who were ahead of them in the MLS Western Conference standings. Sitting squarely in the seventh and final playoff spot, one point ahead of rival Portland, this was a crucial home-stand for the Claret & Cobalt.
Wednesday – LA Galaxy
The Galaxy, already in town after a 2-1 loss to RioT co-tenant Vancouver, looked to maintain their third place standing in the West against an RSL team that has struggled to hang onto leads and close games all season long.

RSL began the match strong once again, taking the lead in the ninth minute thanks to an Albert Rusnák (3) goal off an assist from Aaron Herrera, his team-leading sixth assist. Still controlling the pace and playing with possession, RSL extended their lead to 2-0 in the 26th minute when Rubio Rubin (3) found Maikel Chang (1) for a left-footed shot that just got past Galaxy keeper Jonathan Bond.

As had been the case in previous matches, RSL squandered their two-goal advantage with mental mistakes and a lack of the offensive aggression which allowed them to build a lead in the first place.

LA got on the scoreboard in the 33rd minute via a Víctor Vázquez goal. The Galaxy finished the match outshooting Real 11(6) -11(4) and also managed to wrest the possession advantage away from RSL as the second half clock ticked on.

In the 77th minute, Rayan Raveloson tied the match when he deposited a header into the back of the net, past keeper David Ochoa. Neither team was able to muster much on attack in the final minutes of the match.

The draw dropped RSL to 2-2-4 at home this season, an especially disappointing record when you consider that they have had leads in seven of those eight home matches.
Saturday – Colorado Rapids
Control possession, be aggressive in taking offensive opportunities and hold onto a lead without defensive letdowns: RSL nailed two of three in their first match of the season against Rocky Mountain rival Colorado as they took advantage of an early own-goal before tacking on two more to get their most decisive victory of the season on Saturday night.

The RSL backline was stellar, not allowing a single Rapid shot on goal in the first half, and only two total for the game. Colorado ultimately outshot RSL and controlled 58% of the possession, but could not find any openings to test RSL’s Ochoa in goal. This ensured that the letdowns from previous matches would not be revisited on Saturday.

The first goal of the match came in the 14th minute when Rapid keeper William Yarborough couldn’t handle a back-pass from a teammate and allowed the ball to cross the goal line. The own-goal gave RSL all the cushion they would need on the night. But when you’ve held many leads only to come up empty handed, like RSL has developed a habit of doing, one goal is simply not enough.

A greedy RSL offense would post another first half goal, this one coming in the 30th minute. First-year player Bobby Wood, making his second start of the season, scored his first career MLS goal as he did the heavy lifting himself by shaking a Rapid defender before rocketing a ball inside the left post for a 2-0 lead.

In the 76th minute, with RSL looking for an insurance goal, Damir Kreilach (5) found Rubín for the third Real goal, providing RSL with enough momentum to complete the shutout.

Ochoa finished with two saves and picked up his third clean sheet of the season.
On Frame
Following the home stand, RSL now takes their show on the road for three matches. Real will look to avenge a draw with the Houston Dynamo on July 31 before traveling to the west coast for matches against the LA Galaxy and Portland Timbers.