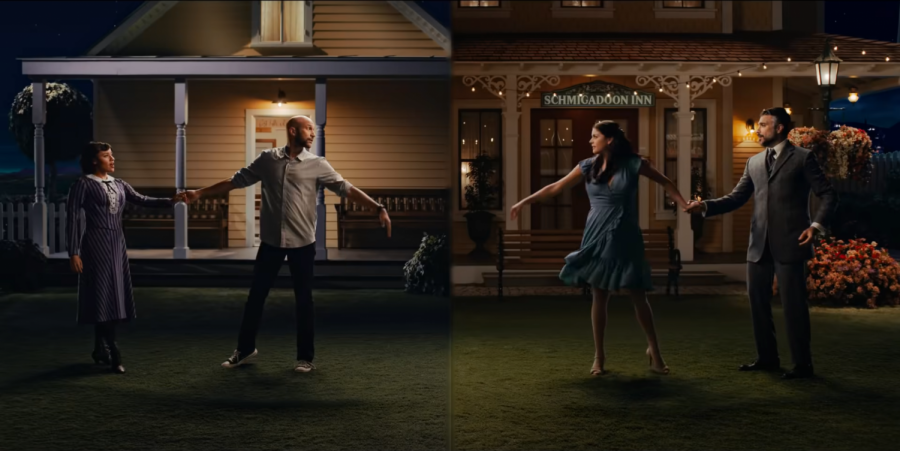 Ever dreamt that life was like it is in musicals? Well, that dream — or personal nightmare — becomes the reality for unhappy couple Melissa (Cecily Strong) and Josh (Keegan-Michael Key) when they find themselves trapped in the magical, musical land of Schmigadoon, unable to leave until they both fall in “true love.”

“Schmigadoon!” follows the two, as Josh tries to find love with another woman (Dove Cameron) and Melissa decides to take matters into her own hands to find her own way out of Schmigadoon.

With executive director Lorne Michaels (“Saturday Night Live”) and creators Cinco Paul and Ken Daurio, this fantastic feature lives and breathes to its fullest potential. The highly-anticipated musical spoof series dropped its first two episodes on Friday, July 16 on Apple TV+ with new episodes released every Friday.
Welcome to Schmigadoon!
“Schmigadoon!” is a show for all, but it is especially enjoyable for those who know their golden-age musical theater repertoire. Hearing piano riffs and melodies with an eerie familiarity to the classics provides a boost of serotonin.

As someone who grew up listening to the soundtracks of “Oklahoma!” and “Seven Brides for Seven Brothers,” I was more excited by the references to songs I had ingrained into my brain than the aesthetic of the show.

It’s like a scavenger hunt — Broadway World has even started posting a weekly reference guide for all things “Schmigadoon!” for those moments where viewers might think, “That sounds familiar, but I can’t quite put my finger on it…”

Of course, a majority of the satire stems from acknowledging the way that golden-age musicals have poorly aged. While there are some untouchable and timeless classics, it is impossible to ignore how times have changed and some theatre tropes are no longer acceptable.

In watching the commentary of the underage girl being married off, the use of the term “queer” back in the olden days, the very religious views that are imposed on the town and the classic gentleman caller, “Schmigadoon!” invites theater-goers to make fun of these iconic tropes and address the biases inherent in them.
The Future of the Show
It is anticipated that, by the end of the show,  Melissa and John will find love once again — how will that happen? It’s anyone’s guess. It has been foreshadowed that episode four will focus on Josh’s pursuit of schoolmarm Emma Tate (Ariana DeBose) and Melissa will start working for the handsome town doctor, Jorge Lopez (Jaime Camil), but what’s in store for the rest of the inhabitants of Schmigadoon?

It would be interesting to see the preacher (Fred Armisen) and the preacher’s wife’s (Kristin Chenoweth) relationship fall sideways since they hold the most “righteous” relationship of the town.

On the other hand, a character by the name of Countess Gabriele Von Blerkom (Jane Krakowski) has yet to enter the world of the show, but has been teased and it is easy to assume that her character will shake up the relationship between Melissa and Josh.

Lastly, now that Melissa has a new man on her mind, where does that leave the gentleman caller, Danny Bailey (Aaron Tveit)? All will, hopefully, be revealed over the next couple of weeks as the show releases new episodes.