Fringe Fest: ‘Strangers: A Homo’s Odyssey’ is a Beautiful Journey in Self-Love 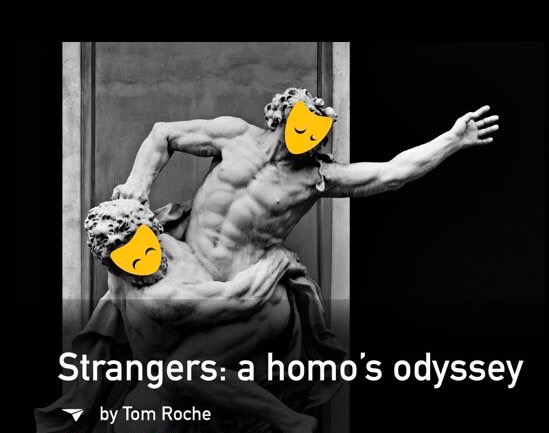 Why do we love? This age-old question has been asked by all who’ve felt the bitter sting of heartbreak or the intense grasp of infatuation. Answers to the query have been attempted by poets, musicians and scientists, but, in his one-man-show “Strangers: A Homo’s Odyssey,” Tom Roche provides a simple solution: “Because Zeus is an asshole.”

Inspired by Greek mythologies, movement and art, “Strangers: A Homo’s Odyssey” is a journey of discovery. In a short runtime of just over 20 minutes, we watch Roche as he explores queerness, coming out and the qualms of finding love in this digital age.

Premiering as a part of the Great Salt Lake Fringe Festival 2021, the venue at the Gateway Mall in Salt Lake City is small and intimate. With only 24 seats, audiences are up close and personal with Roche throughout his performance. The set is made up of a single chair, a rack of clothes and a large mirror. Wonderful in its simplicity, Roche is able to use the small set gracefully to emphasize his message of self-love.
Intimate and Vulnerable
As a cis-gendered, heterosexual male, I was initially worried that “Strangers” would be out of reach for me. On the Fringe Festival website, the demographic for this show was listed as “LGBTQ+ Artists, Student Artists.” As I do not fall into this category, I was concerned that the heart of the show would go over my head.

The second I stepped into the seating area, I was placed at ease. The quaint lighting and the homey intimate set welcomed me in with open arms. As the show began, Roche masterfully mixed humor with seriousness — any anxieties I had melted away.

Quickly, Roche begins to shed articles of clothing as he recounts a frightening tale of sexual pressuring. This incredible vulnerability connected the audience to Roche. My heart ached for him as he recounted what is assumed to be an experience rooted in realism.
A Universal Message
As the show continued, Roche questions humanity’s obsession with finding their other half. Hundreds of dating apps tell us finding a lover is as easy as swiping right — with the possibility of our soulmate at our fingertips, have we become overly obsessed with finding them?

In his play, Roche suggests that maybe finding romantic love is more about loving ourselves. “Love is finding the thing that makes you feel most you,” Roche said to the audience. Whether it be something as simple as a scarf or a new shade of lipstick, we should spend just as much time looking to love ourselves as we do looking for someone else to love us.

“Strangers: A Homo’s Odyssey” surprised me with its universal message. If I could make one suggestion to the show’s place in the festival’s programming, it would be to change the tags from “LGBTQ+ Artists” and “Student Artists” to “anyone with a beating heart.” While its emphasis is on coming out and its LGBTQ+ themes are important and wonderful, I felt that its message transcended any labels. I truly believe anyone who sees this show will be benefited by Roche’s message.

Lucky for you, “Strangers” is playing again on Aug. 7 and 8 at the Gateway Mall. While you’re at it, check out all the other Great Salt Lake Fringe Festival Shows — there really is something for everyone.