Shadley: We Must Adapt to Save the Great Salt Lake 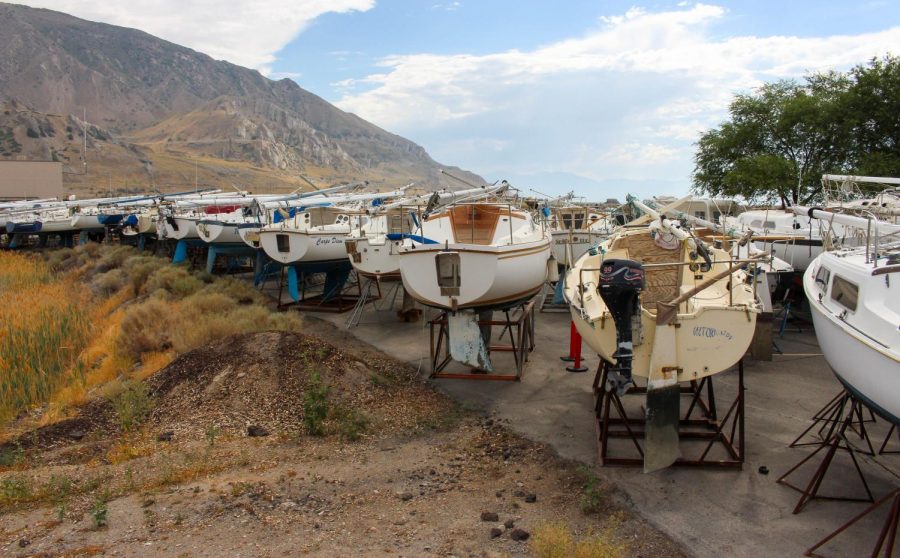 Boats pulled out of the marina at the Great Salt Lake State Park due to low water levels in Magna, Utah on July 28, 2021. (Photo by Gwen Christopherson | The Daily Utah Chronicle)

Despite the Great Salt Lake’s unique and resilient ecosystem, the mounting pressures of water scarcity, drought and climate change pose a danger to all the species that live there. For the Great Salt Lake to survive, we must halt our excessive water usage to give our ecosystem a chance to recover, but that will require all of us.
The Bear River Development Project

The Bear River Development Project stands as the most imminent threat to the health of the Great Salt Lake. To learn more about the project, and the effects it would have on the Great Salt Lake, I sat down with Nick Halberg, a research and policy analyst at Utah Rivers Council.

The project would build new dams on “the largest service water tributary to the Great Salt Lake,” Halberg said. The proposed plan would divert 25-30% of the river’s water for residential and commercial use in Utah. For an ecosystem already facing extreme water levels, diverting a quarter of its main water source would only exacerbate the situation.

“It will already take some pretty serious action to save the lake,” Halbert said. But if the Bear River Development Project goes through, “it will be the nail in the coffin.”

We cannot afford to further reduce lake levels, but the Bear River Development Project had been proposed in response to the increased water demands of a growing population in Utah. Either Utahns continue using water at the same rate and destroy the Great Salt Lake, or we engage in personal and political actions that reduce our projected water demands.
Opportunities for Water Conservation

As a result, water districts can “make their water rates super cheap” because it’s such an insignificant portion of their revenue. This entire system leaves Utah cities with some of the cheapest water rates in the American Southwest.

When water isn’t appropriately valued, people naturally use more of it. Despite repeated attempts to reconcile the true value of water in the Utah State Legislature, a bill to restructure this property tax system has never passed.

Utah uses 72% of its water for agriculture, far more than the 33% used by the U.S. as a whole. While one’s initial instinct may be to blame farmers for our water shortage, farming is far less of a problem than the outdated irrigation technology found on many Utah farms.

The technology to drastically reduce our water usage in Utah’s agricultural industry already exists, it’s only the political will and funding that stand in the way. Halberg said that roughly “280 million dollars” of the $1.4 billion Utah received from the American Rescue Plan Act will go towards “water-specific projects.” The Utah State Legislature will determine the exact apportionment of those funds in the 2022 legislative session.


Why We Must Act
Unless we act, more and more of the water destined for the Great Salt Lake will be diverted for human consumption. The wetlands that will be destroyed by water diversion currently serve as critical habitat for 8 million migratory birds. These birds, made up of over 230 different species, rely on the ecosystem every year. Without it, they have nowhere to stop and feed on mosquitoes during their migration.

However, the lack of water would be a disaster for humans as well. We can expect worse air pollution in a city that already consistently reports some of the worst air quality days in the world. When winds blow through the dried lake bed, it will add PM-10 containing arsenic to our air, leading to a whole host of health consequences.

With Utah’s growing population and droughts amplified by climate change, constraints on our limited water supply will only continue to grow. While many of the runaway effects of climate change cannot be completely undone, we still can save the unique, beautiful ecosystem of the Great Salt Lake.

The survival of the ecosystem which our species has relied upon for so long requires humanity to employ its most successful evolutionary ability: adaptation. We must adapt our cities, agriculture and lifestyles to ones that demand far less water. Doing so is the only way for humans to successfully exist in American Southwest ecosystems.