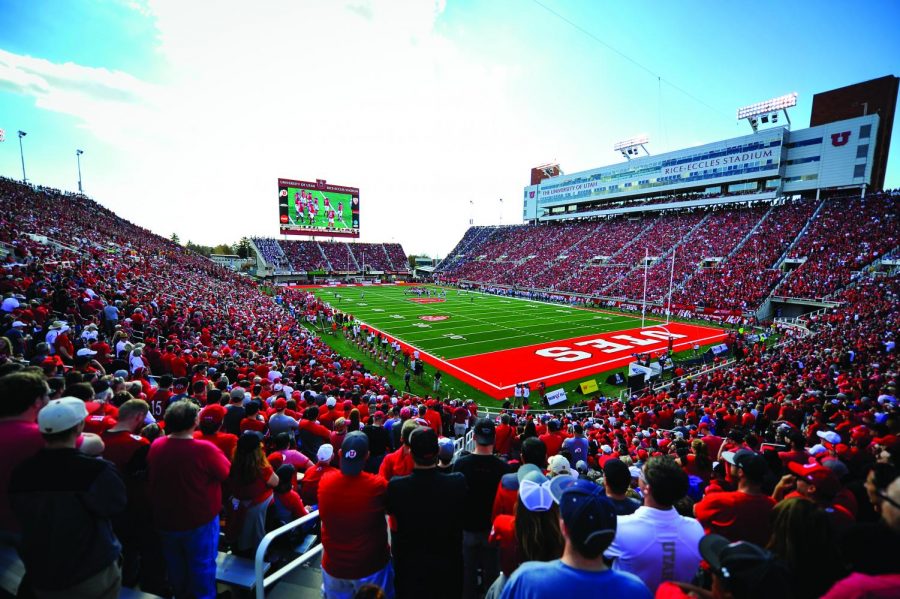 Since joining the Pac-12 in 2011, the Utah football team has boasted an impressive 42-19 record at home. As such, the Utes have built a reputation for having one of the best home-field advantages in not just the Pac-12, but in all of college football.

While I might be a little biased toward the school I attend, here are the five reasons why Utah Football has the best home-field advantage in the Pac-12.
5. The Stadium is Always Full
From 2015 through 2019, Utah was one of two teams in the Pac-12 alongside Oregon to average over 100% attendance at home games. During that time, Utah averaged 46,462 fans per game, which is 101.18% of Rice-Eccles Stadium’s former capacity. Needless to say, playing in front of a full stadium is much more intimidating than a stadium that’s three-quarters full, which some Pac-12 programs are accustomed to.
4. The Elevation
Sitting at 4,600 feet above sea level, it goes without saying that Rice-Eccles Stadium’s elevation certainly plays into Utah’s favor. As someone who is in decent shape and lives at sea level during the summer, I find myself somewhat winded just walking up a flight of stairs for the first week or so when I come back to Utah for school.

Visiting teams often put up a good fight against the Utes in the first half, but by the fourth quarter, the elevation becomes apparent. As a general rule of thumb, if the Utes are down by 10 points or less at halftime, it is pretty safe to bet that they will ultimately come back and win the game.

The only team in the Pac-12 that the Utes don’t have this advantage against is when their rival Colorado comes to town, but let’s be honest, Colorado hasn’t been a concern for us in years.
3. The Weather
Here is an interesting statistic: None of the four California schools in the Pac-12 have an all-time winning record at Rice-Eccles Stadium. Perhaps the fact that Salt Lake City often reaches upwards of 90 degrees at the beginning of the season in August but that it is not uncommon to see snow piled up on the sidelines by the time November rolls around can explain this.

It is tremendously difficult for teams from warm climates to adjust to playing in the snow, and this is an advantage that the Utes have on nearly every team in the Pac-12, aside from Colorado. But as I mentioned earlier, have the Utes ever really been concerned about the Buffaloes?
2. The Noise
Rice-Eccles Stadium was ranked one of the top 30 loudest football stadiums in all of college football this year by Big Boomer. If you’ve ever been to a Utah football game, this will probably come as no surprise to you. I have left games at Rice-Eccles Stadium with my ears ringing like I just left a punk rock concert. I personally can’t say I’ve had the same experience after the countless USC or UCLA home games I’ve been to throughout my life.

1. The M.U.S.S.
If I had a dollar for every time I was told at new student orientation my freshman year that the M.U.S.S. was ranked as one of the top five student sections in the country and they set off the Richter scale on campus during the 3rd down jump, I wouldn’t be in college right now.

With this in mind, the M.U.S.S. is arguably the most passionate student section in the Pac-12. Unlike other Pac-12 schools where it is considered tradition to leave at halftime, the M.U.S.S. stays full for the entire game. It doesn’t matter who you are, what fraternity or sorority house you’re in, or how “cool” you are. Everyone goes to football games and everyone gets behind the Utes.