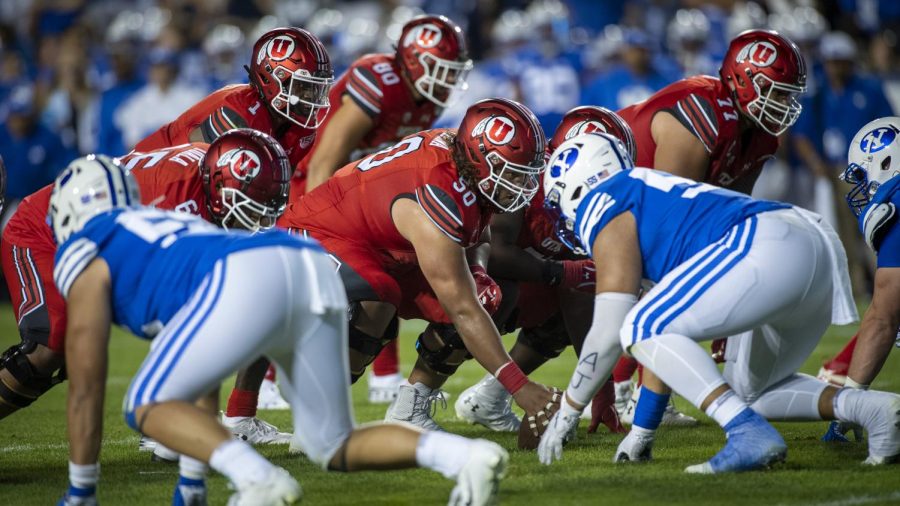 After two years, the highly anticipated Holy War matchup returns to Utah’s schedule as they’ll travel down to Provo on Saturday, Sept. 11 to face BYU. While Utah has dominated the rivalry, winning nine straight, you never know what you are going to get from the in-state game and nothing is ever guaranteed.
Scouting the Utes:
Ranking: No. 21 (AP Poll)

Utah is coming off a decent performance in their season opener against Weber State, defeating the Wildcats 40-17. While Weber did lead at one point early on, 7-3, and the halftime score was only a 19-7 lead for Utah. The Utes shook off the rust and put together an impressive second half performance, outscoring the Wildcats 21-10 en route to victory.

Quarterback Charlie Brewer was as advertised, finishing the day 19-27 for 233 yards and two touchdowns. Notably, Brewer was magnificent in the pocket as he waited patiently for plays to develop before serving up passes on a platter, consistently hitting receivers in stride and even threading the needle on a few plays.

As for his favorite target, junior tight end Dalton Kincaid was the receiver of choice as he brought down four passes for 75 yards and two touchdowns, including a diving catch in the corner of the end zone for six points.

In regards to the run game, JUCO-transfer Tavion Thomas emerged as the frontrunner, recording 107 yards and two touchdowns on 12 carries (8.9 average).

Defensively, it was all about Devin Lloyd as the Pac-12 Defensive Player of the Week recorded 12 total tackles — seven of which were solo — with one sack, two tackles for loss, one interception and a forced fumble.
Utes to Watch
Tavion Thomas
As previously mentioned, Thomas was excellent against the Wildcats as he plowed through defenders all night long, finding the end zone twice and leading the game in rushing yards.

More than likely, Utah will look to run straight through the Cougar defense and it will be interesting to see if Thomas can replicate his week one performance. If so, not only will the Utes emerge victorious but Thomas will solidify himself as RB1 moving forward.
The Utah Secondary
While BYU does present a solid running back in Tyler Allgeier, the Utah defense should have him locked down with their defensive line and elite linebackers. That will most likely force BYU to attack through the air, placing a lot of responsibility on the secondary.

Players like Clark Phillips III, JaTravis Broughton and Malone Mataele will have their work cut out for them as they look to defend against BYU quarterback Jaren Hall and weapons like Neil Pau’u and the Nacua brothers.
Hear it From Coach:
“The key will be preparing the right way,” head coach Kyle Whittingham said in Monday morning’s press conference. “Prepare hard and play hard. That’s a simplistic formula — [in] simple terms that’s what you do. If you don’t prepare — that’s not just on the field, but in the film room, the weight room [and] everything that comes with it, getting your rest, hydration. There are a ton of different aspects to preparation and you’ve got to pay attention to all of them.”
Scouting the Cougars:
Ranking: N/A

Despite being outplayed in several key areas such as total yards, passing yards and first downs, BYU walked away with a victory in week one, defeating Arizona 24-16. While the Cougars led the whole way, they did have to overcome a slight momentum shift when the Wildcats scored a safety and touchdown, closing the gap to just 8 points. However, thanks to an interception by Hayden Livingston in the end zone, BYU regained momentum and never looked back.

While he did have a rocky start, quarterback Jaren Hall finally found his footing as he went 18-28 for 198 yards and two touchdowns. He also demonstrated an ability to move the ball with his legs and finished as BYU’s second leading rusher with 36 yards on five attempts.

As for Hall’s favorite target, Pau’u was unstoppable as he finished the day with 126 yards and two touchdowns on eight receptions.

Defensively, BYU struggled in terms of yards as they allowed 426 total yards and 27 first downs. However, when it mattered the most, the Cougar defense held its ground as they only allowed one touchdown on the day.
Cougars to Watch
Neil Pau’u
Pau’u is arguably the most dangerous player for the Cougars as he absolutely scorched the Wildcat defense in both yards and touchdowns. With Gunner Romney most likely out with injury, Pau’u will be the key to the BYU offense and if the Utah secondary can’t stop him, it could be a long night for the Utes.

The BYU Defensive-Line
The defensive line played a huge part in BYU’s victory over Arizona as they were in the backfield all night long. This not only shut down the Wildcat run game, which only finished with 81 total yards, but the D-line also accounted for four of the five sacks and three of six tackles for loss. They will have to be on the top of their game if they have any hope of stopping Thomas and the Utah run game this week.
How to Watch:
This week’s game will be nationally televised on ESPN with kickoff set for 8:15 p.m. MDT.

Dave Flemming, Rod Gilmore and Alex Chappel will be the TV crew on the game. Fans can also listen to the game on the Home of the Utes, ESPN700 with Bill Riley and Scott Mitchell on the call.