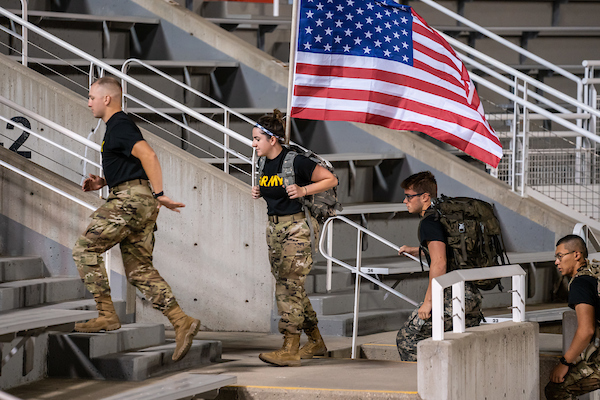 University of Utah Navy, Army and Air Force ROTC midshipmen and cadets honor the 20th anniversary of 9/11 by running the equvalent of 110 flights of stairs. (Photo Courtesy of Dave Titensor at The University of Utah)

At 8:46 a.m. on Sept. 11, 2001, American Airlines Flight 11 crashed into the north facade of Tower 1 at the World Trade Center in New York City. A second plane, United Airlines Flight 175, then crashed into Tower 2 at 9:03 a.m. By the end of the day, two other planes crashed, in the Pentagon and in a field near Shanksville, Pennsylvania. The attacks on 9/11 killed over 2,996 Americans.

In remembrance of the first responders who entered the burning towers on 9/11, around 150 Naval, Air Force and Army Reserve Officers’ Training Corps cadets from the University of Utah climbed 110 flights of stairs at Rice-Eccles Stadium on Friday, Sept. 10.

“Today was obviously kind of the opportunity for us to remember the sacrifice that those individuals made on that day,” said Jeremy Borque, the commanding officer of the ROTC at the U and a professor of military science. “It’s a small testament just to the things that they went through trying to rescue as many people as they did.”‘

After the events of Sept. 11, Borque said the force protection within the military, or the preventive measures enacted to mitigate conflict with a specific area, changed to reflect a new understanding: there can be no innocent bystander.

“After that day, obviously, everybody was in the same boat, you know, it was like, you realize that this terroristic event happened on our home soil, and you see it afar and you see it in other places, and you think that can never happen here, and then when it does, how, you know, how do you recover from that?” Borque said.

While there are many students at the U born after the attacks or who were too young to remember, some members of the faculty remember where they were on that day in 2001.

“I was at home, eating breakfast, and I heard a story on the news that said something about a plane crashing into a building in New York. And I thought, wow, that’s really strange,” said Matthew Burbank, a political science professor at the U. “I didn’t really hear anything more about that story, but I had to teach that day. And I got on the bus and came up to campus.”

Burbank was teaching an undergraduate research class that day and recounted that his whole class was spent talking about what was happening in New York. While it was not clear what had happened or why, he said after the second plane hit everyone knew this was not an accident or just a plane crashing into a building.

“The best way to describe the reaction, particularly among students, was just a sort of complete and utter shock,” Burbank said. “It was a sense of, ‘I don’t understand what’s happening. I don’t need to like — I don’t get what’s going on. Why is this happening?’ And, you know, some people were kind of visibly quite upset by this.”

“There are lots of young people who are growing up that may know something about it [but don’t] have this kind of visceral reaction that somebody who, say is 40 years old, has to that because they were 20 when that happened — they lived with it their entire life,” Burbank said. “People [who] are growing up after them don’t see it the same way, right, they just don’t have that same kind of reaction.”

Director of Peace and Conflict Studies David Derezotes has been with the U since 1989 and was on campus during the attacks.

“Like most everybody else I was upset and angry that, whatever the reasons were for people being angry at us, they needed to fly folks into a building and kill as many people as possible,” Derezotes said.

Derezotes felt that if there was anything people could learn from history, it’s that if people want to reduce hatred in the world they need to start with themselves. While he acknowledged that with 9/11 we need to mourn the loss of all the victims and for the suffering it caused, the country should also unite not solely on the result of an attack, but in love towards other people.

“It’s a mix of wanting accountability when people commit an attack like that, it’s awful there’s no doubt about it, but also maybe we can learn as a country to respond without making things worse,” Derezotes said.”The basic idea of to transform hate, I need to start with myself and my own hate.”

“I have not been able to find a single high school in the country that has a dialogue team, but every high school has a debate team,” Derezotes said. “We’re a country of debaters, a world of debaters, but dialogue is different. It’s not about winning or losing, but creating relationships across divides.”

One lesson Derezotes emphasized was for him, there is no such thing as complete security, but people can move from that with cooperation.