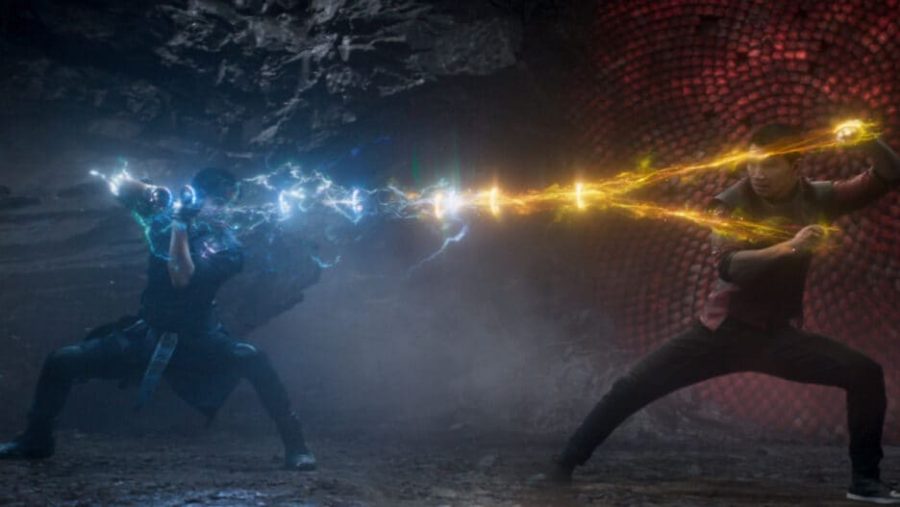 “Shang-Chi and the Legend of the Ten Rings” begins not with the hero, but the villain. Played by Hong Kong megastar and titan of World Arthouse cinema Tony Leung, Wenwu is the owner of the mystical Ten Rings.

Wielding the Rings has granted Wenwu immortality, along with powers of a super sort that have allowed him to conquer lands and build up terrorist organizations.

One day he comes upon the mythical land of Ta Lo but is stopped by a young woman named Ying Li (Fala Chen). Their Wuxia-inspired hand-to-hand combat soon turns heart-to-heart. The two fall in love, Wenwu gives up the Ten Rings, Jiang Li leaves Ta Lo and they have two children, one of whom is our hero, Shang-Chi.

It’s an extremely big deal that Marvel was able to snag Leung, and I am delighted to think that this could be someone’s introduction to his work (If you’re inspired to dig even deeper, I want to recommend 2000’s “In the Mood for Love.”).

Leung is a true movie star, able to command the screen with an effortlessness that cannot be faked or taught. His performance in “Shangi-Chi” is very still, but watch how he uses his eyes, and how clearly he is able to convey loneliness, longing, regret and grief through them, all in a single look.

The success of the Marvel Cinematic Universe rests with the characters. More than the question of whether the portal will be opened or the planet blown up, the stakes of Marvel movies come from the audience’s genuine investment in the characters and their fate. Even the smallest side character has legions of fans. In Wenwu, Marvel has one of its most interesting and dimensional villains in ages.

Lest you worry that the villain threatens to overshadow, Shang-Chi is played with charisma and cheerful affability by Simu Liu. After the death of his mother, Shang-Chi fled to San Francisco and anglicized his name to Shaun.

Throughout the movie there are intriguing grasps at themes relating to assimilation, rediscovering your own culture and the gulf between immigrants and the family and loved ones that stayed behind. Shang-Chi spends his days hiding from his past, working as a valet, and doing karaoke with his best friend, or perhaps love interest, Katy (Awkwafina). All of that catches up to him when his father abruptly summons him home.

The conflict between Shang-Chi and Wenwu arises not out of differing ideologies, but grief and loss. This grounds this movie in reality far more than most Marvel movies, and deals with issues in many families, though heightened. The idea of one’s father as your arch-villain is fertile and poignant territory.

Struggles to Find Personal Voice in the Marvel Machine

Shang-Chi is in the midst of an identity crisis, one that is reflected by the movie. It strives to replicate Wuxia movies but is hampered by the MCU Business. The action choreography is solid, but it’s disheartening to see Wire Fu replicated with CGI. The MCU beats feel perfunctory and jarring, rather than organic to the story that the filmmakers wanted to tell.

When free of the MCU shackles, “Shang-Chi” is a wondrous, wistful fairy-tale rather close in feeling to a Disney classic. The scenes between Leung and Limu strip away the pixels of CGI to reveal the aching and familiar story of a child striving to become their own person, while fearing the disappointment of their parents.

“Shang-Chi” should serve as a catalyst for the reminder to Hollywood that what audiences respond to is not CGI, but living, breathing actors playing interesting characters.

“Shang-Chi and the Legend of the Ten Rings” is available to watch in select theaters.