Thoughts From the Gridiron: Utah vs SDSU 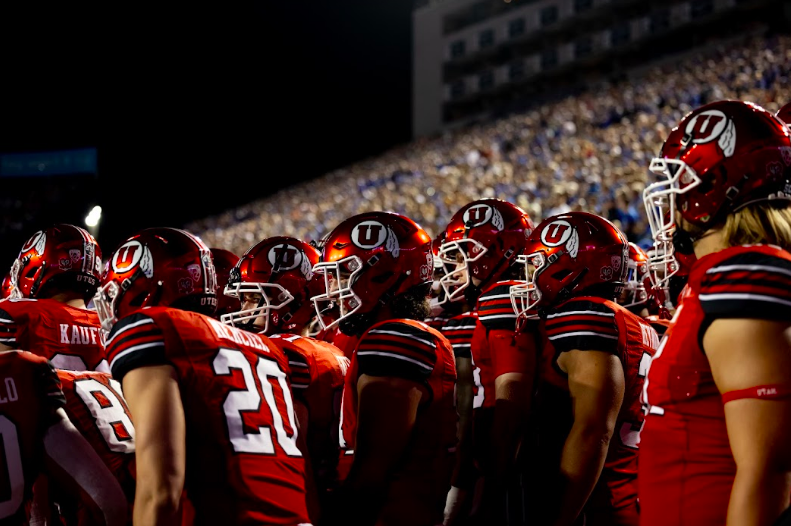 University of Utah players pepare for the game against BYU at LaVell Edwards Stadium in Provo, UT on Sept. 11, 2021. (Photo by Jack Gambassi | The Daily Utah Chronicle).

For the second week in a row, the University of Utah was again shocked as they conceded another loss, falling to San Diego State 33-31. While Cameron Rising entered the game and demonstrated some fourth quarter magic with back-to-back touchdown drives, it’s clear this Utah team has a lot of issues as they struggled for a majority of the game on both sides of the football.
Defense
While the defense wasn’t bad, they also weren’t the Utah defense that we’ve been accustomed to over the past few seasons as they’ve continued to struggle with turnovers and inconsistency with their overall play.

On the flipside, besides the amount of points and yards on the ground they allowed, the defense did a great job holding the Aztecs on third down. For the game, San Diego State finished just 2-15 and the defense came up big in the fourth quarter with multiple stops to give Rising and the offense the opportunity to tie the game.

As for overtime, Utah’s secondary let its guard down significantly as they not only allowed multiple completions but conceded the first passing touchdown by San Diego State and fell for a trick play on the Aztecs’ winning two-point conversion.
Standout
Devin Lloyd was again the most impressive Utah defender as the veteran linebacker recorded 13 total tackles, 2.5 tackles for loss and a fumble recovery.

Week in and week out Lloyd continues to lead this Utah defense, and while his Pac-12 Championship hopes may not be quite attainable, he’s already made it very clear that he is a top-tier NFL prospect.
Room to Improve
Over the last two games, the Utes have collectively allowed over 400 yards on the ground, something completely unexpected due to their talented defensive line, elite linebacker core and young secondary. Notably, if you were to take away the Aztec run-game, San Diego State would’ve finished with just 44 yards and 14 fewer points as their aerial attack was non-existent.

If the Utes can really tighten things down from a running standpoint, their defense could reach an elite level and greatly assist the team in winning football games and turning the season around. If not, they will more than likely face more of the same as teams will be taking note of the obvious infirmity.
Offense
Through three quarters, the offense had absolutely nothing to account for as they hadn’t scored a single point and only produced 135 yards of total offense against the Aztecs. Similar to its performance in the BYU game, Utah’s offensive-line was pitiful, leaving Charlie Brewer exposed and offering zero aid to the running backs.

More than likely we have seen the end of the Brewer era as the senior-transfer struggled to handle the heavy San Diego pass-rush. For the game, Brewer finished just 14-26 for 104 yards and an interception. He also was sacked on multiple occasions and just couldn’t operate in the scheme.

Finally, after three quarters, Rising was given a shot and he did not disappoint. While his first few drives didn’t produce a whole lot, Rising came alive in the fourth quarter, leading the team in back-to-back touchdown drives and forcing OT.

While the Utes would eventually lose, Rising quickly separated himself and very well could be the starter next week against Washington State.

As for the run game, it continues to pose a huge question mark through three games as nobody can consistently produce out of the backfield. For the game, the backs finished with only 70 yards on 31 attempts (2.3 average).

Even though Bernard was fantastic last week and seemed to separate himself, he struggled tonight as he finished with just 47 yards on 17 attempts. While it is important to note that the backs had absolutely no help from the offensive line, someone has to step up and prove that they consistently produce or else Utah will struggle to balance out their offense and to put points on the board.
Standout
While he couldn’t quite grasp the victory for the Utes, Rising was a godsend as the sophomore quarterback finished 19-32 for 153 yards and three touchdowns. Additionally, while he led the Utes on back-to-back touchdown drives, he also converted a two-point conversion to tie the game, and threw an impressive 25-yard touchdown pass to Jaylen Dixon on the Utes’ very first play of overtime.

“Cam came in and like I said, gave us that spark with his legs as well as with his arm. He ran for some big gains, running the football. He came in off the bench, and his first few passes might have been a little errant, but he settled in and did a great job once he got a rhythm. And he got into a rhythm very quickly,” Whittingham said.

Impressively, Rising entered the game at the 5:24 mark of the third quarter. It’s probably safe to say that if he would’ve started, Utah would’ve won the game.

As unfortunate as it is to see Brewer struggle, Rising was the most impressive player on Utah’s roster and will more than likely see the start against Washington State next week.
Room to Improve
Before Rising’s magic, the offense was a complete and utter disaster from the start. From the lack of protection by the O-line, to Brewer’s inability to play outside the pocket and the running backs’ lack of production, the initial three quarters of this game were more than forgettable.

Now that the Utes find themselves at 1-2 and entering conference play, things have got to change or they very well could remain below .500 for the rest of season. While Rising’s play does instill a little bit of hope that this offense can actually produce and put points on the board, they’ve simply got to be better moving forward.

“We need to play more efficiently on offense,” Whittingham said. “That is the number one issue we’ve got right now. What you saw in the last quarter is what we have to be for an entire game.”