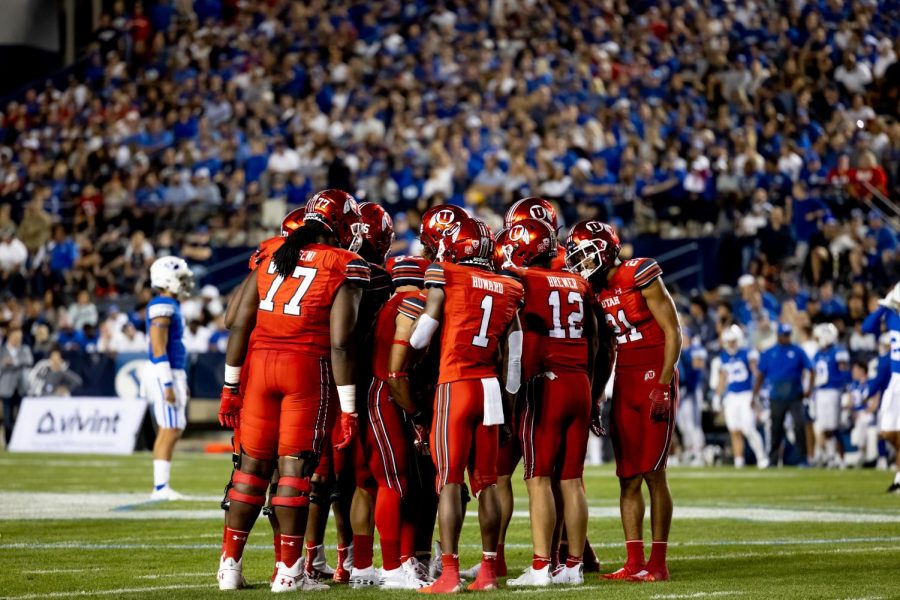 University of Utah's offense in the huddle during the game against the BYU cougars at LaVell Edwards Stadium in Provo, UT on Sept. 11, 2021. (Photo by Jack Gambassi | The Daily Utah Chronicle).

The University of Utah football team suffered their second consecutive loss on Saturday evening, falling to San Diego State on the road in a thriller. Utah drops to 1-2 on the year, a disappointing start for a team that had high hopes entering the season.

This game was a tale of two halves, if the first half lasted until there were five minutes left in regulation. Utah woke up significantly to storm back and tie it with two touchdowns in the final few minutes, but ultimately did not do quite enough in the third overtime period to win the game.

For most of the night, Utah’s offense was completely ineffective. Britain Covey scored a touchdown on a long punt return, but Utah did not grab an offensive touchdown until there were four minutes remaining in regulation.

The first half was sloppy for both teams. Utah’s offensive line was again ineffective, leaving quarterback Charlie Brewer without much time to throw. The running game also struggled, finishing with only 70 yards on the ground for the night. It was not a pretty half of football on either side. SDSU scored on a kickoff return and the game was tied at halftime, 10-10.

The second half opened with more of the same for the Utes. They gave up a touchdown on the first drive of the half, letting San Diego State quarterback Lucas Johnson scamper for a 54 yard gain to set up a Greg Bell run for the score. Brewer immediately threw a bad interception, setting up another scoring play for the Aztecs on another Bell rush.

That found Utah in a 14-point hole, on the road, a week after a crushing loss to BYU. Following another ineffective drive for the offense, head coach Kyle Whittingham made a decision at quarterback: Cameron Rising in for Brewer.

“He’s a competitor,” said Whittingham. “Cam came in and gave us that spark … he settled in and did a great job.”

Rising played very well in his stint for Utah to close this game out. He racked up 153 yards and three touchdowns in his play time, which lasted from about five minutes left in the third quarter until the end of the third overtime.

Touchdowns to Theo Howard and Covey at the very end of regulation plus a two point conversion tied the game up at 24 going into overtime. Despite looking dead in the water just a few minutes before, Utah gave themselves a chance.

The Aztecs opened with the ball, driving into the end zone for a touchdown. Utah matched the score instantly, with Rising throwing a touchdown pass to Jaylen Dixon on their first snap of overtime.

The Aztecs got a score on their first attempt, taking the lead at 33-31. Utah needed to match the score to stay alive.

Rising found Connor O’Toole in the end zone, and the pass was initially called a completion. However, upon review, the call was overturned. O’Toole did not maintain possession all the way to the ground, and the catch was waved off. There are no second chances in 3OT; Utah lost a heartbreaker.

The Utes will open Pac-12 play next week against Washington State. None of Utah’s games have really counted for anything, but it’s hard not to be pessimistic after dropping back to back non-conference games. Washington State is also 1-2, and returning home may be the spark Utah needs to get back on the right track.