Utah Volleyball Upsets No. 6 Washington On the Road 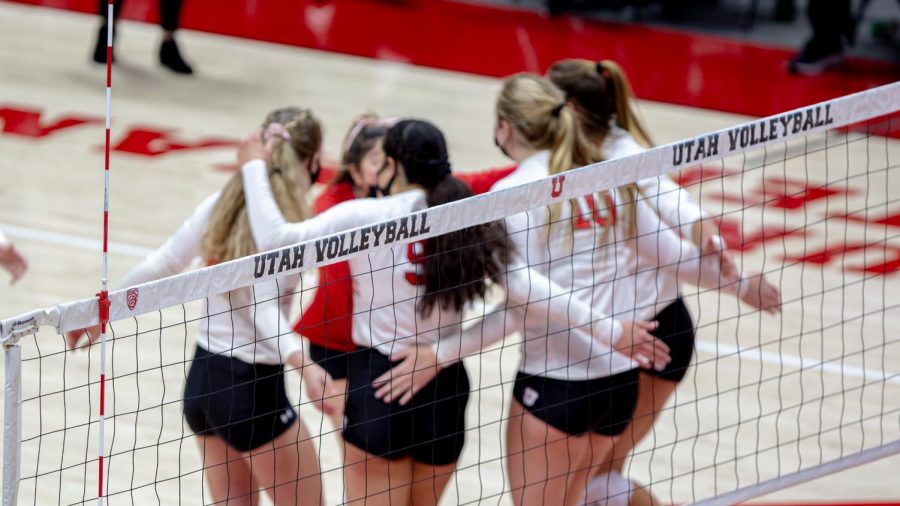 U of U Volleyball players during the game against Stanford on Mar 5, 2021 at the Jon M. Huntsman Center on campus. (Photo by Jack Gambassi | The Daily Utah Chronicle)

The Utah women’s volleyball team officially kicked off Pac-12 play this week as they traveled to Seattle to play No. 6 Washington. Facing yet another top-ranked opponent, the Utes battled past Washington, beating the Huskies in an impressive five sets.

The first set was thrilling as the Utes had a slight 7-3 lead before the Huskies came back to tie it up, 8-8. From that point on, it was a battle to see who would come out on top with the opening set. Madelyn Robinson had an impressive kill before the Huskies managed to get four points in a row to take the first set 25-22.

The second set had a similar start to the first, however, the Utes trailed early on by a few points until Robinson had a big back-row attack to set the Utes up for a set point. Dani Drews had two sets of back-to-back kills which helped the Utes even out the set score 1-1 as they took the second set 26-24.

In the third set, the momentum kept shifting as neither team could get a true hold on the game. At one point, the Utes were up 18-11 in full control before the Huskies got on a roll and retook the lead with a score of 21-19. Kennedi Evans had a great kill to tie it up, which put pressure on the Huskies. At 21-21, things became tight but the Huskies refocused and stole the set 25-22.

The Utes started off strong in the fourth as they gained an early lead of 6-0. After a timeout, Utah continued to use their momentum and stretched the lead out to 13-4 before the Huskies put together a 7-1 run to close the gap. However, Drews came out and recorded two great back-to-back kills which kept the momentum going for the Utes to put them up 19-14. Utah then wrapped things up as they finished strong with a fourth set victory of 25-18.

The fifth and final set of the match was long and competitive as the teams went back and forth. The Utes were down 13-12 when Zoe Weatherington had a kill that forced the Huskies to make an error. The Utes had a set point, being up 14-13, but lost it on an attack error. Robinson and Drews worked together on the second match point to set up the kill as they managed to win the fifth set 16-14.

As for individual performances, Drews finished the night with 26 kills, 12 digs, and two service aces. Robinson had 14 kills while Weatherington had 10 kills. Allie Olsen and Evans had six and seven kills respectively. Stef Jankiewicz had 51 assists and 15 digs while Vanessa Ramirez had 19 digs and 10 assists. Megan Yett also had 11 digs during the game.

Following their second top-10 win on the road, Utah will now travel to Boulder to face No. 24 Colorado on Friday, Sept. 24 at 7 p.m. MDT. Fans can watch the match on the Pac-12 Network.