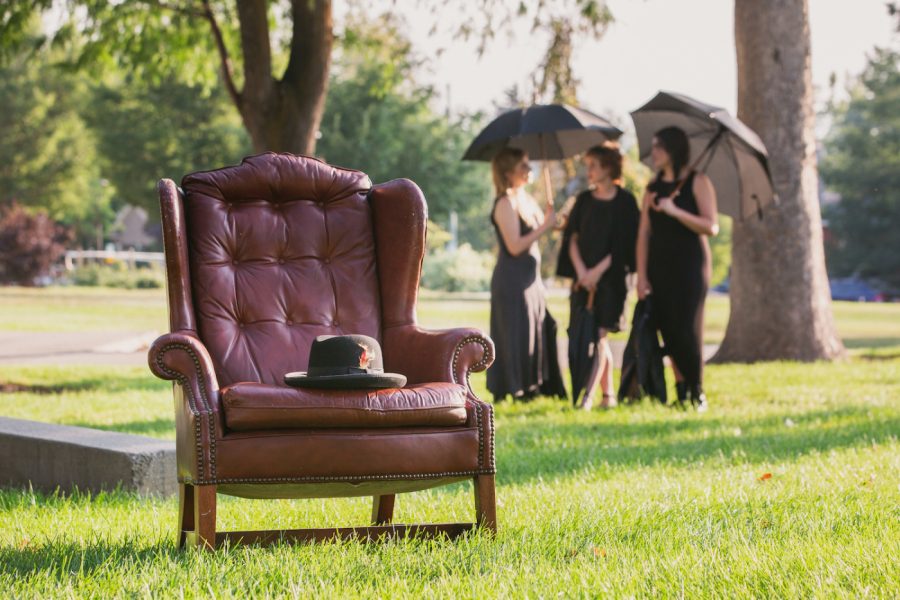 In the basement beneath the grandeur Pioneer Memorial Theatre sits the cozy Babcock Theatre, a space I’ve come to love, where the University of Utah’s Department of Theatre set up shop for their latest production of Gab Reisman’s “Storm Still.”
Setting the Stage
Immediately as I walked into the theatre, I was taken with the set designed by Abish Noble.

In front of me sat the back of an old wooden house, lights on in second-story windows and the back door ajar to a small, creaky wooden landing, leading to a perfectly imperfect messy backyard.

A mountain of old suit coats, dress pants and worn hats on the front of the stage drew my attention. Surrounding the mountain were hills of hat boxes, files and cardboard boxes packed with fishing nets, umbrellas, ping pong balls and more.

Around the stage are chairs, desks, filing cabinets, dressers, coolers, barbecues, you name it, all shaping an “I Spy” of set decoration where each item was carefully placed for the actors to play with over the course of the next two hours.

This artificial yet authentic backyard became a welcome space with the entrance of three musicians, brandishing their weapons — Maria Moesinger on the violin, Sandra Detweiler on the acoustic guitar and Matthew Tripp with accordion in tow. This last piece of musical artillery caught the eye of my wife who, with eyes wide, asked, “Is that an accordion? I’ve never seen one in real life before.”

On opening night, the audience around us was mostly made up of professors, theatre students and families of the cast. While this made us strangers in a sense, the atmosphere created by the elaborate set and engaging music offset any awkwardness as the show began.
“Lear” Brought to Life
The actors took the stage to bring Reisman’s words to life — a complicated task, as “Storm Still” follows the lives of three sisters who recently lost their father and are trying to organize his estate. In their attempt for catharsis, they take part in an old game of acting out the lines of William Shakespeare’s “King Lear.” Named for the daughters of Lear, the sisters — Goneril, Regan and Cordelia — quickly find how closely the story resembles their own lives.

Constantly switching from the experiences of Shakespearean tragedy to complicated family dynamics is no light work. The actors — McKinley Barr, Grace Cawley and Victoria Wolfe — certainly had their work cut out for them, but navigated the dense text with the physical environment as their guide.

Through ramshackle props, costumes and scenery all from the backyard’s estate sale set up, the three held the stage in vocal and physical presence, aided by the powerful rhythm of the text and drama of the music underneath.

All of the technical elements together accentuated the script, and the show was entertaining with an aura of realism that cannot be understated.

With direction by Alexandra Harbold, the journey of the three sisters reminded me of the relevancy of Shakespeare’s work. His messages of love, betrayal and forgiveness rang true in my heart during and after the curtain closed.

That’s what theatre is for — creating works that allow us to reflect on our own situations  — and I’m grateful for this story of familial grief, estranged siblings and crazy gimmicks.

“Storm Still” runs through Oct. 3. Tickets and more information can be found on the Department of Theatre’s website.