Thoughts From the Gridiron: Utah vs. USC 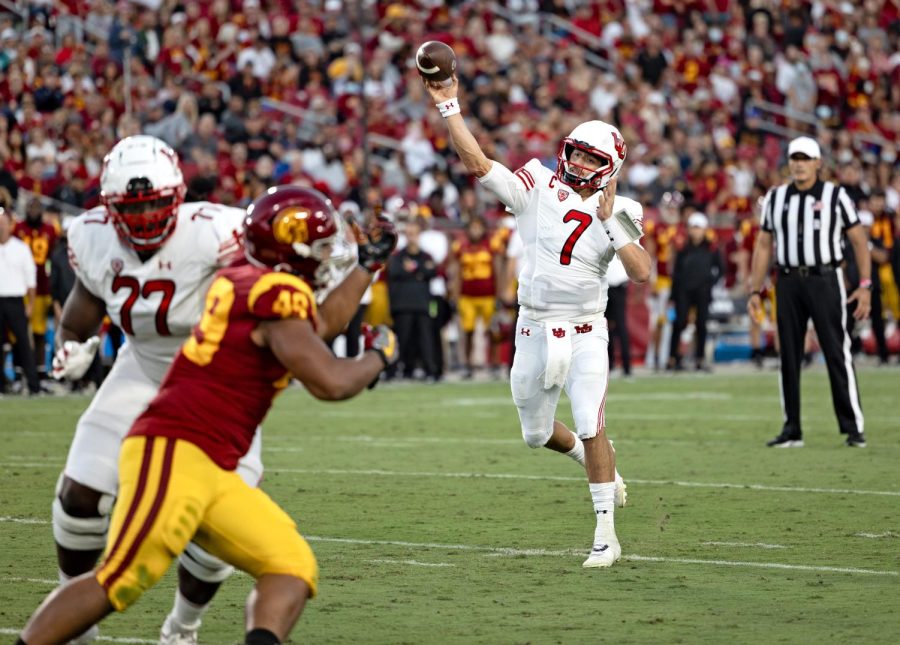 The University of Utah football team grabbed a huge win over USC on the road on Saturday evening. The victory moves Utah to 3-2 on the year, 2-0 in Pac-12 play. This is the first time that Utah has beaten USC in Los Angeles since 1916, over 100 years ago.

Utah played their most complete game of football so far this season on both sides of the field, and thoroughly dominated the Trojans for most of the game.
Offense
Quarterback Cameron Rising was dominant for Utah, finishing with 306 total yards and 3 total touchdowns with no interceptions. The signature play of the game came at the end of the first half, when Rising threw a deep pass to Devaughn Vele off a flea flicker for the touchdown on 4th and short. The score put Utah up 21-10 going into halftime, and they quickly tacked on two more touchdowns at the start of the 3rd quarter.

The offense hummed all night long thanks to a superb game from Rising and great play calling by head coach Kyle Whittingham and offensive coordinator Andy Ludwig.

Utah got everyone involved on offense. Tavion Thomas ripped off a 43 yard run for a touchdown, which was nice to see after his fumbling issues earlier in the season. Whittingham wants to use Thomas more, and him holding on to the ball will go a long way towards that. Thomas finished with 113 yards on 16 carries.

Utah’s six touchdowns were all scored by different offensive players. Rising, Thomas, Vele, Brant Kuithe, Dalton Kincaid and Money Parks all got on the board for Utah.

The Utah offense had no turnovers tonight. It was a problem for them through the first few games of the year, but it’s good to see the players correct mistakes and come out clean.
Defense
The defense held tough all night long, limiting USC to just 26 points, with two Trojan touchdowns with extra points coming in garbage time. The Trojan offense was able to move the ball, but the Utes came up with big stops time after time.

Devin Lloyd and Clark Phillips III were fantastic as usual. Vonte Davis had an interception. Mika Tafua got through for two sacks.

USC quarterback Kedon Slovis attempted 53 passes but only completed 33 of them. The Trojans finished with only 92 rushing yards on the night.
Special Teams
Not much to speak of on special teams for Utah. There were no kick returns for the Utes and just one punt return for a single yard by Britain Covey.

Utah did allow 80 yards on kickoff returns by the Trojans, so that’s something to clean up.

The Utes did not attempt a field goal, but Jordan Noyes was 6/6 on his extra point tries.
Up Next
Utah returns home next week to play Arizona State. The Sun Devils are 3-0 in Pac-12 play and the winner of that game will take sole possession of 1st place in the Pac-12 South. It’s a massive game, but the Utes are riding high after winning in a place where they hadn’t won in over 100 years.