Alexander: Police Reform Does Not Start With Utah Legislators 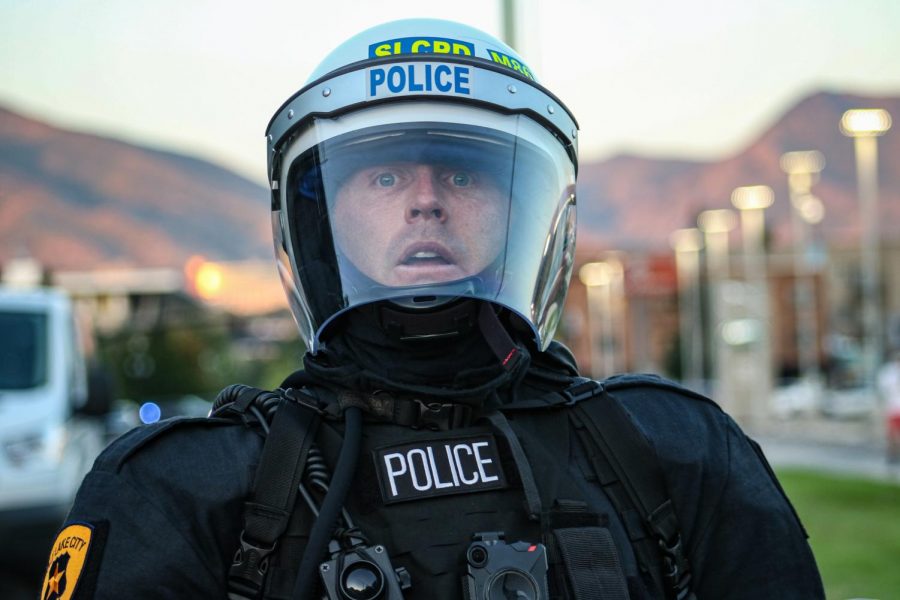 Police in riot gear surround and block in protesters in the streets of Salt Lake City on July 9, 2020. (Photo by Ivana Martinez | Daily Utah Chronicle)

In September, The Salt Lake Tribune released a damning analysis of Utah police shootings and the role race plays when officers fire their guns.

It found that racial and ethnic minorities are shot disproportionately compared to white people. The study included the victim’s weapon, which showed that a majority of minorities Utah police shot at had blades or knives in hand or were unarmed, versus the majority of white people shot at held guns.

Some call the findings “disappointing,” as it demonstrates Utah’s own systemic racism in its criminal justice system. But in reality, these findings are consistent with what every person of color grows up learning in America — be careful around police because you are gambling with your life.

There’s no shortage of reports, articles and studies discussing race and policing, yet we still act “surprised” and “disappointed” when confronted with clear research. The Salt Lake Tribune’s findings are upsetting and troublesome for several reasons, not only for highlighting Utah police departments’ incompetence.

Every year, the Utah legislature introduces new police reform bills, but it seems none have sufficiently or effectively curbed racist practices in Utah policing. While legislative policy can help in setting standards, police reform also requires prompt action and change within police departments at the local level.

For starters, The Tribune’s analysis revealed how Utah police departments fail to keep their own records of police shootings.

Crediting the findings to the work of their journalists, The Tribune emphasized the obstacles encountered in obtaining the data, with one being that Utah police departments aren’t required to keep records of police shootings.

The lack of record-keeping among Utah police departments only widens the divide between these departments and the communities they serve. Obscuring the truth further cements distrust of police — especially for communities of color.

Establishing legislative policy to mandate reporting on police shootings requires the willingness of police departments. Actual effort on their part in contributing to a running record-keeping system cannot be realized without the help of individual departments.

Another disturbing finding from The Tribune’s analysis includes why the disparity exists in the first place. The “clearest explanation” given in the original article by University of Nebraska Omaha criminology professor Justin Nix, is that Utah police also disproportionately stop minorities.

Again, this finding didn’t necessarily surprise many. But when looking at the research, officers treat people worse in lower-income areas and those that include higher densities of racial and ethnic minorities. This behavior includes unjustified stops, verbal abuse, stereotyping and other harmful treatment.

Again, this finding is not surprising. Even though Utah police departments aren’t inherently racist, these findings critically and clearly state how police attitudes towards people of color demonstrate prejudice. And in turn, they make communities of color feel incredibly unsafe around police. We cannot keep dismissing the experiences of people of color and their interactions with police as “isolated incidents” worthy of anecdotal references. Racism in policing frequently occurs in Utah.

I want to clarify that I still support Utah’s police and most law enforcement departments. The work they do in protecting and serving our community is unmatched and, frankly, I’m not sure what we citizens would do without them. But I firmly believe police departments won’t eliminate racism within their departments until the departments themselves undergo restructuring to reflect community values.

Instead of playing politics and attributing incompetency to calls for reform, police departments need to prove their efforts to reform their own practices. That means abolishing practices that reinforce racial prejudice. They must adopt policies that punish acts of police brutality and excessive use of force — especially when they infringe on community members’ civil rights.

Police departments need to be transparent in the steps they take to reform themselves, because we can’t see progress on our end. We need to see work happening beyond passing bills.

Unfortunately, I don’t have all the solutions for fixing the issues surrounding Utah police departments and their attitudes towards people of color. We can continue advocating for an increase in police training and the use of body cameras, as well as introducing clear limits for use of force. But when blatant and glaring issues exist in our police departments that we cannot ignore, calling police out and calling for change is the first route we should take to remedy the harm they cause.

To eradicate police brutality and racial prejudice in our police departments, we need prompt action policy and reconstruction of our state’s law enforcement. But we can’t keep leaving this decision to our legislators, who continuously pass inadequate police reform bills. We’ve waited too long for them to come up with proper policy that encompasses community wishes and police efforts.

Our legislators have failed both Utah police departments and communities. The change we need does not start with our legislators, but starts at the local level, with individual officers and departments.