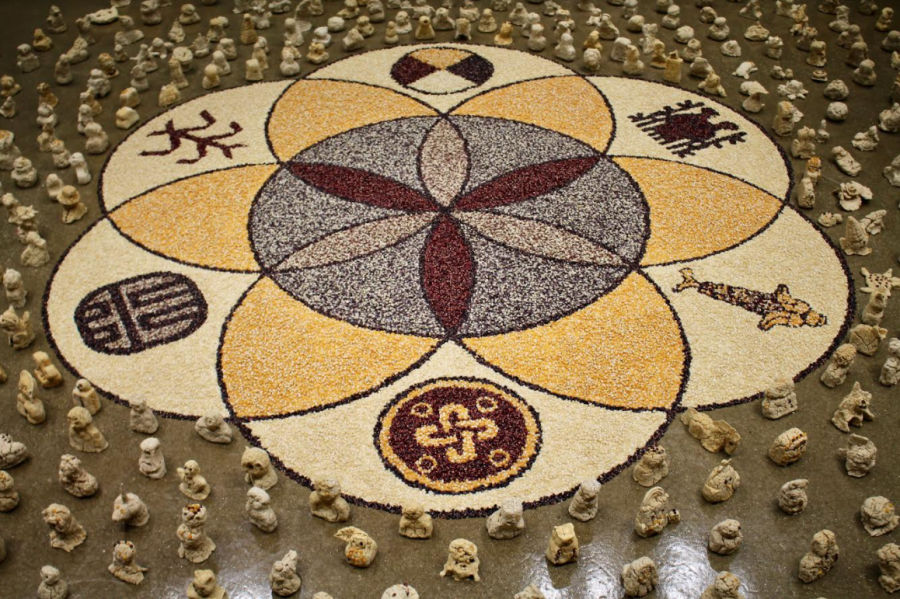 For the last decade or so, maize has been the main focus of performance artist and educator Jorge Rojas. In his latest installation “Gente de Maize / People of Corn” at the Kimball Art Center in Park City, Rojas explores the role of corn as a cultural connector that can help us understand our relationship to the food we eat and where it comes from.
Sacred Origins
“Maize is a powerful food. So many cultures on this continent have subsisted on it. It’s no wonder we’ve built philosophies and spiritual practices — even our sense of community around it.”

The name “Gente de Maize” or “People of Corn” originated from the Quiche Maya creation story written in their sacred text, the Popol Vuh. It outlines an account of the ancient god Xmucane shaping humans from corn, emphasizing its importance beyond just serving as a staple crop.

Rojas has been exploring the cultural practices surrounding maize for more than a decade and his research has connected him with community leaders around the country. His first project working with corn, “Tortilla Oracle,” centered the spiritual traditions of maize and the sense of community and intimacy it has the power to create. From there, Rojas continued to investigate the powerful cultural implications of maize in his work.

“Through the years, I realized I had an opportunity to expand beyond my interest in connecting with my own roots and my own ancestors to really thinking about corn as this connector across cultures in the Americas.”

He began the practice of crafting meticulously arranged mandalas, made from corn kernels, which depicted geometric patterns, like the flower of life. As this project evolved, he began researching and incorporating symbols from various Indigenous cultures — many of which have a direct connection to maize.
Cultivating Community
In his most recent installation, he encouraged community engagement by instructing visitors to make their own figures out of corn masa to place around the mandala and planned a series of events in a program centering Indigenous community leaders.

“Because I’m an educator and I’ve worked at the museum for so long, I have a real passion for creating programs that shed light on the things that we’re talking about and also make connections between the work and the actual issues, all of these programs were instrumental in having those conversations.”

The program began with an offering made by three Tzeltal Maya weavers and community leaders, Maria Elena Ku’lub, Josephina Ku’lub and Rosita Mendez. The next program was conducted completely in Spanish and was followed by a blue corn mush and tamale cooking program. The cooking programs were offered by culinary experts Larissa Jackson and Irene Sanchez. Jackson has a master’s degree in education and works to develop Navajo linguistic and cultural curricula. Each of the women involved came from different Indigenous backgrounds, which was central to Rojas’ hope that his installation would provide a space for these traditions to intersect.
A Divine Tradition of Caring for the Earth
Just as Rojas’ work centers Indigenous cultivation and traditions around food, it illustrates the disconnect that emerged between people and their food as a result of colonization. The community members and traditions Rojas highlights in his work are all balancing sacred practices of cooperation with the Earth amid the destruction of the environment because of Western capitalist practices.

“Capitalism is central to all of these conversations and our modern agricultural industry has very much separated us from the really important connections that exist between the plants, the crops, the harvesters and the consumers. I’ve found that many of us don’t really think about where the food we eat — that nourishes us, that sustains us — is coming from. Who is doing the labor on these fields?”

Rojas believes that the answers to the questions we have about land use, sustainability and rebuilding a connection to our environment are already there. “The people that understand our connection to the Earth and that the Earth is sacred — that we can’t just destroy our environment — are usually women, Indigenous women … We just need to invite them to the table and invest in their knowledge.”

“We Are All Connected to the Food That We Eat.”
By fostering community growth and conversation, “Gente de Maize / People of Corn” is a beacon of hope in a world where environmental issues can sometimes feel insurmountable. Rojas hopes that his work will get people talking about the food they consume and where it comes from, and begin engaging with long-standing traditions of caring for the environment.

“I’m not a scientist, I’m not an environmentalist, but I’m interested in using these art projects to connect us to our understanding of the Earth. I’d like to do it in a way that is beautiful and thought-provoking.”

This article was updated on Nov. 11, 2021, to clarify details concerning Jorge Rojas’ “Gente de Maize / People of Corn” installation. Rojas instructed visitors to make their own figures out of corn masa, not clay, to place around the installation.