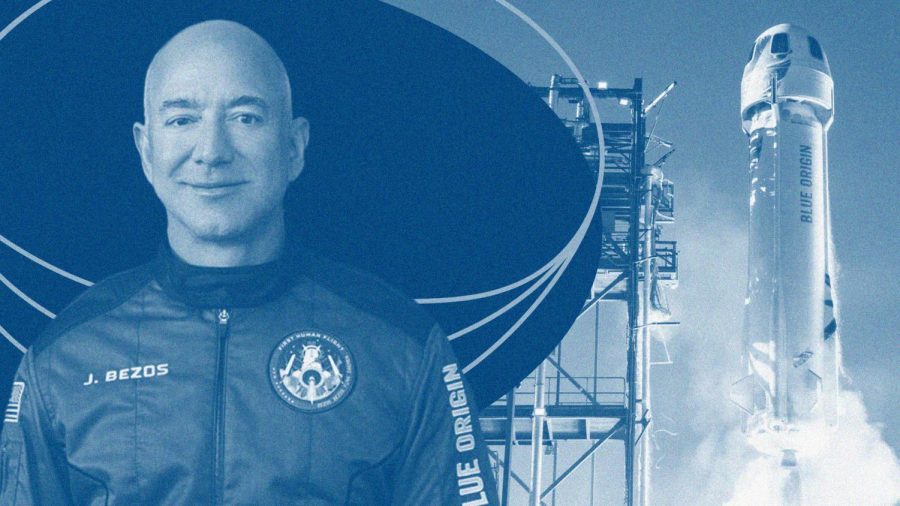 Space exploration is an increasingly profitable sector and billionaires are cashing in. Since Elon Musk’s success with SpaceX, other entrepreneurs have hopped on the train — Richard Branson founded Virgin Galactic and Jeff Bezos started Blue Origin.

Many are upset billionaires are investing in space while climate change remains a growing concern. Though the ultra-rich investing in space travel is a blatant display of wealth, it’s actually one of the better ways they are using their money.

Commercialization of the space industry is good. The fact that billionaires are leading this change has larger implications of labor exploitation and a poor tax system. Our government is the guilty party, for allowing the wealth divide in America to become so dramatic and polarized.
Billionaires Shouldn’t Fix Climate Change
Many argue that billionaires should be spending their money on saving our planet before investing in space exploration. I agree with this general sentiment, but billionaires spending their excessive wealth on unnecessary things isn’t a billionaire problem. It’s a government problem.

We need to tax the rich to prevent excessive wealth accumulation. We can’t rely on billionaires to solve the world’s problems because they won’t. Billionaires profit from the working class’s struggle. The top 1% increased their profits during the 2008 recession and flourished similarly during the COVID-19 pandemic. While 40 million Americans filed for unemployment during the pandemic, billionaires’ net worth increased by half a trillion dollars. This is due to disproportionate financial aid and tax evasion through loopholes. Why would you work to fix inequality when you are actively profiting from it?

Dependence on billionaires to solve problems like climate change will only increase opportunities for exploitation. Billionaires like Bezos, Bill Gates and Musk are investing in and donating to renewable energy because it is profitable and good for PR. If we rely on them to fix the climate crisis, they could change their minds as soon as something more lucrative comes up. The purpose of government is to act in the interest of the public. CEOs act in the interest of their wallet.

Billionaires make money. It’s what they do. Bezos is investing in space travel because it’s profitable. We can’t expect the rich to give that up out of the goodness of their hearts because to become a billionaire, you likely don’t have much good in your heart. We must pressure the government to fix problems that matter.
Privatizing Space Travel is Good
Compared to other things tech billionaires could be doing with their money, space travel is worth the investment. Paul Sir, an educator at Clark Planetarium, suggested that the privatization of the industry will have positive effects on the progression of technology, even if it stems from corporate greed. He said the moon landing “was more politics than anything, but we did get a lot of good things out of it.”

The private sector will progress space technology faster and more sustainably than the government. NASA spent nearly $20 billion on the Space Launch System, a rocket that has been in the works since 2011. The private sector should fund space projects, instead of our taxes being funneled into expensive, unnecessary projects. Musk estimates that his rocket will cost only $2 million per mission. Additionally, his rocket will be reusable, which is more sustainable than any current NASA rocket.

The space industry is progressing fast. It is a lucrative field, so our tax dollars are better spent on things that need government funding to advance like sustainable agriculture or renewable energy.

Yes, our government should prioritize legislation to mitigate climate change and they should absolutely address the wealth divide. But until those changes happen, we can’t expect private corporations to stop innovating. That said, our government should take its role as regulators seriously and should create legislation for the space industry.
The Government’s Role
Feeling upset at people with excessive wealth for spending it on unnecessary things is completely good and natural. We should be upset. But we should direct those emotions towards the people who affect change.

We should be excited about the prospect of increased space exploration that will take place during our lifetime. Expansion and exploration are a part of the human experience. It is also important that we prioritize protecting our Earth and the people living on it. Billionaires will always prioritize their own profits, so it is our government’s responsibility to create a tax system more representative of income inequality and allocate those taxes towards things that matter.

Joyrides through space are now accessible to the extremely wealthy. Naturally, the 1% are the first to enjoy the benefits of space technology. But it is worth considering that this may just be an annoying consequence of the greater good of exploring space.