Alexander: Shooting to Incapacitate Should Not Be Controversial 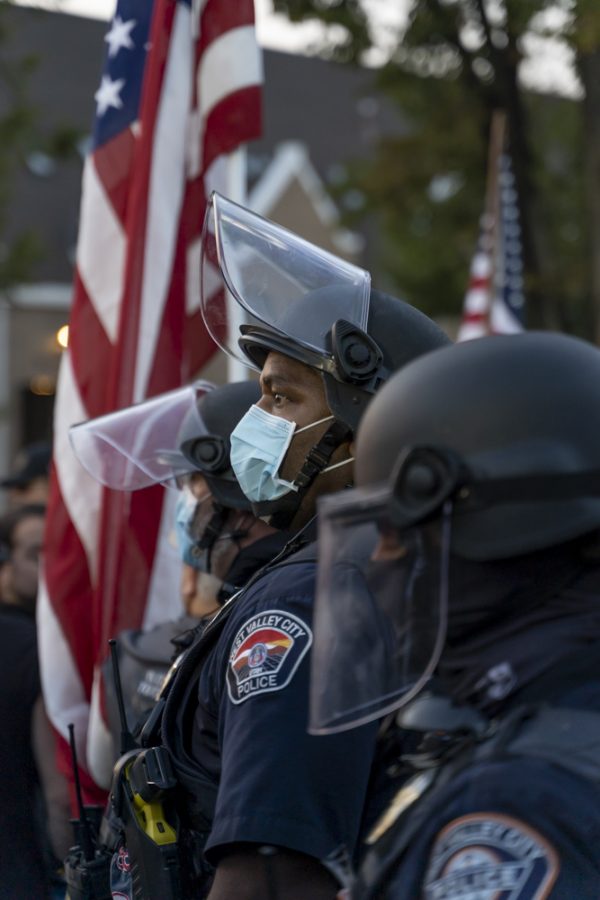 Police Officers assemble outside of The University of Utah in Salt Lake on October 7th, 2020. (Photo by Jake Stranzl | The Daily Utah Chronicle)

But for police departments in the United States, the concept faces skepticism from individual police officers. For the police who are striving for reform and building trust in their communities, the concept of shooting to incapacitate deserves attention and support.

Police Chief Louis Dekmar of the LaGrange Police Department in Georgia championed the reformative effort among other unorthodox practices, garnering the respect of his town and community, as well as myself. However, his advocacy for shooting to incapacitate policies is still widely opposed by police unions and officers.

In all situations regarding a deadly assailant, the current police attitude and practice is to shoot to kill, not shoot to incapacitate. The idea of shooting to incapacitate frustrates police, with many believing that the practice will be hard to implement.

Critics claim that it’s easier for officers to shoot in the center mass, the largest part of the body — which often results in death. Such precision shots are hard to teach, and police departments don’t have the budget to institute firearm training on such a level.

Others say shooting in the arms or legs will not stop an assailant from still attacking and accidentally missing the assailant could put others at risk with stray projectiles.

However, all I hear are the excuses of incompetent police departments unwilling to change their ways to accommodate for shifting community attitudes.

Shoot-to-incapacitate is a solution to reduce the chance of death and save more lives. It could also offer communities a reason to be more confident in their police departments, as communities are less trustworthy of the police than they have been for decades.

Shooting to incapacitate can reduce the number of unnecessary deaths caused by police. Police should be shooting to incapacitate in the event of an assailant wielding a less-than-lethal weapon, such as a knife or screwdriver. After all, the job of a police officer is to save lives. Ideally, officers should only be firing their weapons when the threat is imminent, however, we know that is not to be the case for Utah police.

Utah police tend to fire at minorities more often than whites, whether they are armed or unarmed. Because the majority of people shot at by police are minorities, minorities are more likely to die at the hands of police. The rate of violence against minorities by police is incredibly disproportionate, in our state and nation alike. This has been a fact for a long time.

Besides reducing unnecessary deaths by police, shoot-to-incapacitate policies provide other benefits. The practice will help police departments build back trust in their communities.

After the deaths of George Floyd and Breonna Taylor, confidence in police dropped to its lowest point in 27 years. And along racial lines, there are dramatically different views of policing in our country. With minorities already at a disadvantage because of systemic racism, confidence in policing is much lower compared to whites.

Shoot-to-incapacitate also allows officers the chance to stop a threat without taking a life. Many officers do not set out to kill, nor do they wish to take the life of others. But if put in a threatening situation, their orders are shoot to kill. If shoot-to-incapacitate policies are applied, officers have the choice to fatally wound a person or save their life. It’s a choice I’m sure many officers would appreciate, as it demonstrates their willpower for saving the community.

With the implementation of shoot-to-incapacitate policies, police may be able to bridge the gap between communities and themselves, at least to some degree. The policy could change the future of policing and police training for the better. By showing their progress in reformative measures like shoot-to-incapacitate, police departments will demonstrate transparency and their willingness to build trust between themselves and the communities they are serving.

The job of police officers is to serve and protect. Police officers and departments should consider utilizing shoot-to-incapacitate policies. It’s a concept that warrants further discussion and is worth looking at.

Shoot-to-incapacitate policies matter because of the difference they play in police interactions, and whether another person of color will die at the hands of police. Police departments can change their practices and work towards restoring trust in their communities. If our police departments don’t even try to change their practices or try to save more lives, they are demonstrating their true objective. They are not willing to serve and protect.