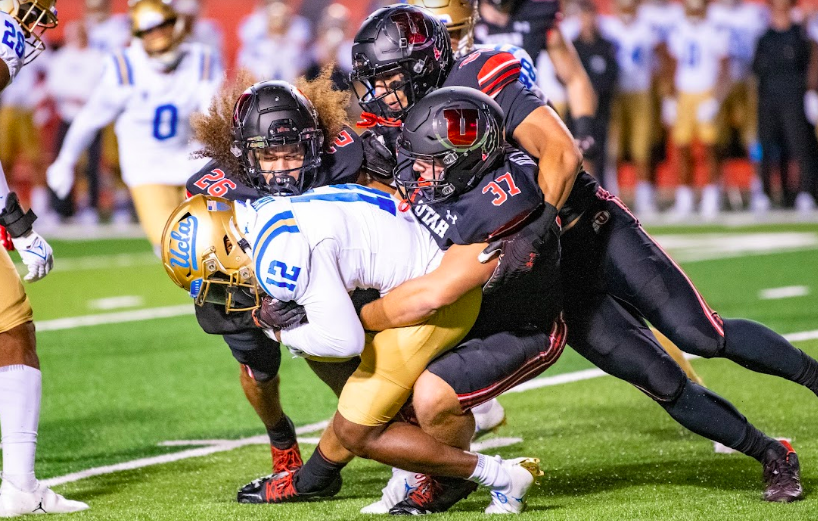 The Utes have continued their winning ways as of late and currently find themselves in complete command of the Pac-12 South with a 5-1 conference record. In their latest victory, Utah cruised to victory behind an explosive run game with three running backs finishing the night with over 100 yards each and totaling 394 of the team’s 441 yards.

As the team has finally hit their stride, Utah will look to remain on course for the Pac-12 Championship with a victory over the inferior Arizona Wildcats this week in Tucson.
Scouting the Utes
Ranking: No. 24 CFP

Utah put on their best overall performance of the season this last week against Stanford with notable contributions on both sides of the football. In what turned out to be a 52-7 obliteration, the Utes run game ran wild and the defense put the clamps on Stanford’s offense no matter what they tried to do.

It was a relatively quiet night for quarterback Cameron Rising who finished with just 140 yards on a 59% clip (13-22). But to be honest, with the way the running backs were producing, it’s no wonder Rising handed it off more than 45 times rather than passing since the Utes totaled more than 400 yards. There was no reason to attack through the air and Rising just kept feeding the beast because the Cardinal didn’t have an answer.

When your run game averages 9.6 yards a carry on more than 40 attempts, it’s going to be a productive night. Not only did Utah run for more than 400 yards with three players recording more than 100 yards each, but they also accounted for six of the team’s seven touchdowns. Simply put, the backs were cutting down the Cardinal defense all night long and could do no wrong.

[email protected]_Football strengthens its hold on the Pac-12 South. 🙌

Three Utes rushed for over 100 yards as they rolled past Stanford to improve to 5-1 in conference play with a 52-7 win over the Cardinal.#GoUtes | #Pac12FB | @GEICO pic.twitter.com/ShUskzWiB6

Overall, Tavion Thomas was the star of the show and led the game with 177 rushing yards and four touchdowns on 20 attempts (8.9 average).

Defensively, Utah stopped nearly everything Stanford threw at them and Devin Lloyd continued to remind everyone why he is one of the best defenders and a guaranteed first-round NFL draft pick. For the night, Lloyd led the game with nine total tackles, four tackles for loss, one sack, one pass break-up, and an impressive pick-six that still cannot be explained logically.

Utes to Watch
Cameron Rising
Rising will need to kick it back into gear this week due to the fact that the Arizona defense has allowed more yards through the air and a far more significant average than on the ground. For the season, the Wildcats have given up a total of 1,642 yards through the air with a 7.6 average. If the Utes are to take care of business like they should, Rising will more than likely need to be a key contributor.
The Secondary
As much they’ve given up through the air, the Wildcat passing game has also flourished in terms of yards this season. Through nine games, Arizona has thrown for 1,937 yards and eight touchdowns. Even though the Wildcats are far inferior to the Utes with only a 1-8 overall record, nobody should ever be underestimated, especially in the Pac-12. The secondary will need to be on top of their game to keep the receivers locked down and the production to a minimum.
Hear it From Coach
“Obviously we played very well on Friday night and we had a great week of practice and preparation, but I definitely didn’t see that coming. To play the way we did in the first half, that may have been our best half of football in a long time. It was good to get the win and that’s our mode right now. One game at a time, one week at a time and that was our entire focus last week – trying to get a win on the road. It will be the same this week and there will be no difference in the way we prepare, in the way we approach things, our focus, our attitude and our mindset. If we can stay in the same mode we are in right now, not looking past anybody, understanding that the game is won Monday through Friday with your preparation and just continue to work hard during the week then that will be in our best interest,” Kyle Whittingham told Utah Athletics.
Scouting the Wildcats
Ranking: N/A

Despite a pitiful overall season, the Arizona Wildcats finally got their first win of 2021 last week with a victory over Cal, 10-3. Even though it was a low scoring contest, it clearly meant a lot to the program as fans rushed the field and a win is a win, especially when you previously had none.

Even though Arizona has put up more yards through the air than their opponents on the season, the quarterback has been a bit of a revolving door with multiple players seeing action. Against the Bears, Will Plummer was entrusted with taking the reps under center and it was a performance to forget. For the day, Plummer finished with just 129 yards and two interceptions.

Ironically, Plummer led the charge on the ground and recorded 68 yards on 11 carries. Right behind him was sophomore Michael Wiley who had 37 yards on 12 carries and the only touchdown of the day.

Defensively, Arizona had their best game of the season and only allowed 122 yards of total offense and three total points. While that is largely an indication of how bad the Cal offense is, Arizona still got the job done and emerged with their first victory of the year.
Wildcats to Watch
The Quarterback
While Plummer has taken a majority of the snaps for Arizona this season, you never know who might be under center. With that being said, and as previously mentioned, the Wildcats have done more damage through the air than the ground this year. Expect that to be their primary source of offense against Utah.
Anthony Pandy
Arizona has done a decent job stopping the run this year, holding opposing offenses to an average of 4.4 yards per carry. Much of that has had to do with linebacker Anthony Pandy, who leads the Wildcats with 62 total tackles in addition to an interception and forced fumble on the year.
How to Watch
This week’s game will be televised on the Pac-12 Network with kickoff set for 12 p.m. MST. Roxy Bernstein and Lincoln Kennedy will be the TV crew on the game. Additionally, fans can also listen to the game on the Home of the Utes, ESPN700 with Bill Riley, Stevenson Sylvester and Scott Mitchell on the call.