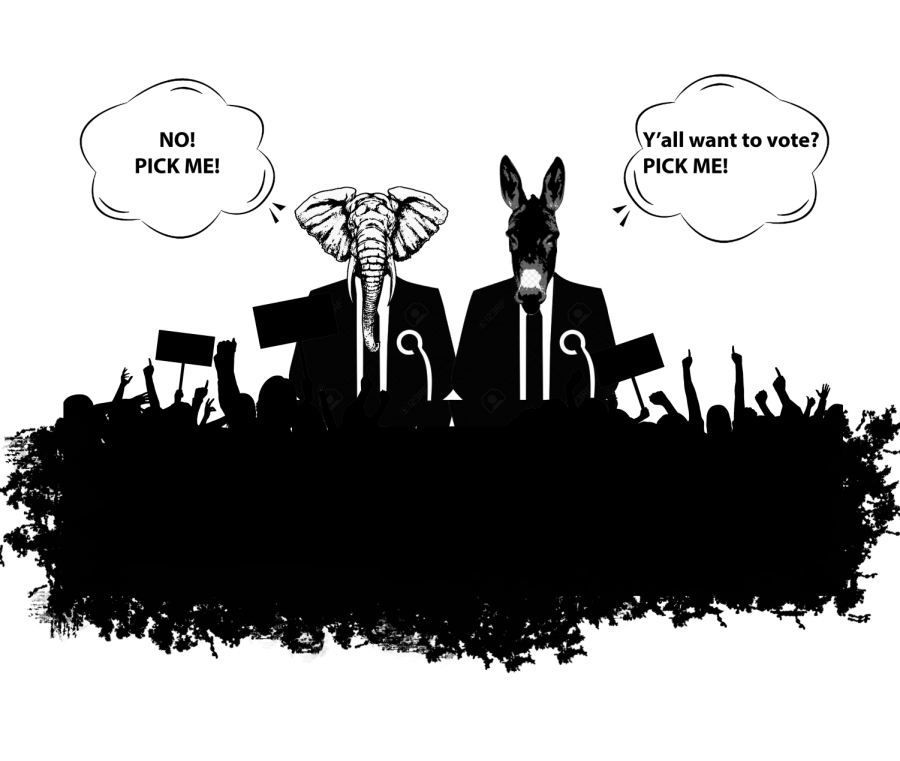 I’m an opinionated person. If you are too, you understand the uncomfortable situations being opinionated can land you in. Maybe you also anticipate a loaded Thanksgiving dinner debate with extended relatives. One misplaced word can spur an immediate, explosive response. But this form of discourse achieves nothing.

The way we articulate our opinions can greatly impact the way people receive them. And our communication techniques dictate how people perceive us. Because of this, we should choose our words carefully when we engage in delicate conversations.

But this principle doesn’t only apply within personal spheres. Deliberate political communication strategies greatly influence how we perceive truth. And as we’ve seen in recent years, political debates have become laden with polarizing political jargon.

Our country has nourished an extremely toxic political environment. Operating from informed decisions requires that we hold leaders and organizations accountable for misinformation campaigns and unproductive rhetoric.
What Are Buzzwords?
A buzzword is defined as “an important-sounding usually technical word or phrase often of little meaning used chiefly to impress laymen.” Essentially, the overuse of certain terms effectively renders them meaningless.

In an email interview Kevin Coe, professor in the University of Utah’s communications department, helped contextualize the role of buzzwords in influencing political attitudes.

Buzzwords adopt loaded connotations that often have little to do with their actual definitions. Professor Coe explained that these connotations are developed “through concerted effort by those invested in a certain political outcome.” Since “the words we use make certain actions more or less likely,” buzzwords work as a powerful — albeit dangerous — tool for political leaders and strategists.

But we see these words constantly appear within political discourse. The turbulent debate around critical race theory (CRT) provides us with a current example. Across the country, some parents have expressed contempt for CRT in school board meetings. In response, Equity, Diversity and Inclusion Committee Chair Stephanie Walker said that CRT is “firing up people and it’s based on things that aren’t true.”

Critical race theory isn’t the only buzzword circulating our conversations. People frequently throw around terms they don’t know in debates about unrelated topics. For instance, at least 20% of Americans admit they can’t define socialism, but it has become a popular political accusation. People label anything surrounding liberal ideology as “Marxist.” This kind of labeling represents a lack of understanding of the political spectrum.
Dog-Whistles
Politicized jargon isn’t the only tool politicians weaponize. Recently I had the opportunity to listen to Professor Ian Haney López from the University of California, Berkeley. He discussed dog-whistle politics, exposing how race has been used as a political weapon on behalf of politicians since the Civil Rights Movement. In his book, “Dog Whistle Politics: How Coded Racial Appeals Have Reinvented Racism & Wrecked the Middle Class,” he elaborates on how politicians used political appeals to persuade white voters to support policies against their own interests.

Racial “dog-whistles,” as Lopez defined them, are “political catchphrases that don’t explicitly mention race but are ultimately used to refer to people of color and the various threats they apparently command.” For example, the phrase “war on terror” may insinuate biased resentment toward people of Arab and Muslim descent.

Subtlety, as Professor Coe described, characterizes dog-whistle politics. However, as our political climate becomes more toxic, bigotry becomes less subtle. “What is striking about the current U.S. political climate is how overt racist language has become,” Coe said, “Fear appeals, especially fear appeals based on racism and xenophobia, continue to be tragically common.” Bigotry and unfounded fear appeals should not characterize American politics. We’ve seen what consequences arise when they do.
Systemic Misinformation
The prevalence of blatant bigotry and buzzwords has made us susceptible to misinformation. The U.S. is particularly plagued by misinformation campaigns to which citizens show adamant allegiance. The politicization of scientific truths behind vaccinations and climate change demonstrates the harmful effects of buzzwords.

Misinformation seems nearly impossible to battle at times. Despite our best efforts to differentiate between genuine and misleading political discourses, we can’t control what information politicians or interest groups promote. For this reason, Coe described misinformation as a “system-level problem” that “will require system-level solutions to fix.”

So, what does this mean? “We need to stop pretending that individual-level solutions can fix the problem of misinformation,” said Professor Coe. “When you have people in positions of power deeply invested in spreading misinformation and organizations interested more in making money than protecting democracy, you have a recipe for disaster.”

Our government’s leaders cannot operate from disingenuous interests. We need to vote out politicians that utilize manipulative communication tactics and hold organizations accountable for their own disinformation campaigns. As long as we let toxic communication define political discourse, we will only prolong meaningful change.

While we need to proceed with caution and do our best to avoid political manipulation, that greater change is necessary. We can’t reach informed conclusions when we aren’t operating from the same pool of facts.