Utes Demolish No. 3 Oregon to Win Pac-12 South Amid Long List of Achievements 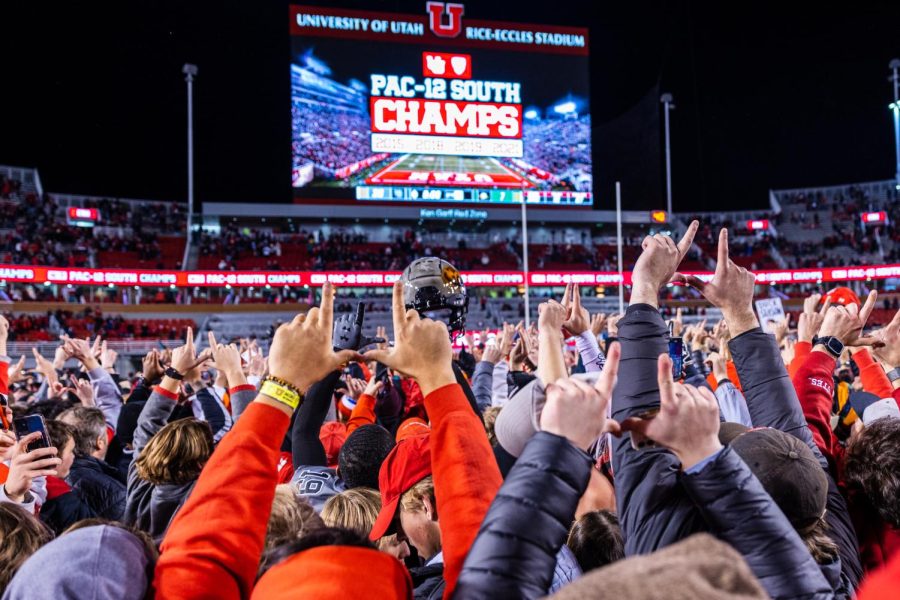 Fans throw up the U after the win against the Oregon Ducks in Salt Lake City, Utah on Nov. 20, 2021. (Photo by Jonathan Wang | The Daily Utah Chronicle)

With 11 seconds left on the clock and the No. 3 Oregon Ducks attempting to run out the first half down 21-0, head coach Kyle Whittingham made a bold move and called a timeout. Despite the unlikelihood of his team doing more than running one or two plays, Britain Covey took the field, and against their better judgment, Oregon kicked to him, and any shot at comeback went out the window.

Upon receiving the kick at the 22-yard line (you couldn’t script it any better), Covey switched to video game mode and the Ducks were history. After completely switching to the opposite side of the field, Covey found a wall of blockers, somehow kept his feet inbounds by mere centimeters and took it 78 yards for the score. This gave the Utes a whopping 28-0 lead heading into the half, but the game was already over. The Ducks had allowed an insurmountable lead and Utah would emerge victorious over the No. 3 team in the country, 38-7.

And THAT’S how you close out the half. 👊
@brit_covey2’s incredible punt return touchdown brings @Utah_Football to 28-0.

“I’ve told Coach [Kyle Whittingham] before that if a team is trying to run out the clock before a half and we have a timeout, call them so we can get a shot,” Covey said.

But that wasn’t the only major accomplishment of the night. In addition to completely exposing the No. 3 country in the nation, the achievements just kept coming — which made the win that much sweeter.

First off, running back Tavion Thomas was the X-factor against the Ducks, and along the way, broke the school’s single-season rushing touchdown record with 16. For an Oregon defense that was only allowing 119 rushing yards per game (3.4 average) prior to tonight, Thomas and the Utes completely crushed it and made all the difference.

For the night, Thomas finished with 94 individual yards on 21 carries (4.5 average) and three touchdowns. All game he continuously plowed through a loaded Oregon defensive line and was a major factor in the Utes going 5-5 in the red zone. For a guy who wasn’t even on a roster a few months ago, struggled with ball security early on and spent a few games on the sideline, he just might be the most important piece on the Utah roster and is already forever immortalized in Utah’s history books.

Second, Utah completely embarrassed the Ducks, handing them their worst loss as a top-five ranked team in program history. What made the difference? Defensively, it was stopping the run game.

Coming into Rice-Eccles Stadium, Oregon had one of the best run games in the conference, averaging 227.4 yards per game (second-best in the Pac-12) and had accumulated a whopping 31 touchdowns (best in the Pac-12). In response, Utah made that their emphasis and held Oregon to a measly 63 yards on the ground which left the Ducks grounded and incapable of moving the football.

“The primary objective of this game was to stop the run and we felt if we did that we had a good chance to have a good outcome and we were able to do that,” head coach Whittingham said.

Speaking of Whittingham, he also became the winningest coach in program history after routing the Ducks, surpassing Ike Armstrong with 142 wins, an achievement very unlikely to ever be beaten.

“I’m really just humbled to be on this team and accomplish such a great accomplishment,” linebacker Devin Lloyd said. “Coach Whitt, I think, is the best coach in Utah football history.”

Finally, after perhaps the toughest season mentally and emotionally, not to mention a rough 1-2 start, the Utes effectively clinched the Pac-12 South, punching their ticket to the conference championship in Las Vegas, and are now the sole owners of the best record in the Pac-12 at 7-1.

With Oregon now behind them, the Utes will play their final regular game of the season at home against Colorado on Friday, Nov. 26 at 2 p.m. MST. Regardless of the outcome, the Utes will then play in the Pac-12 Championship on Friday, Dec. 3, and await a three-team finish between Oregon, Oregon State and Washington State to determine their opponent.