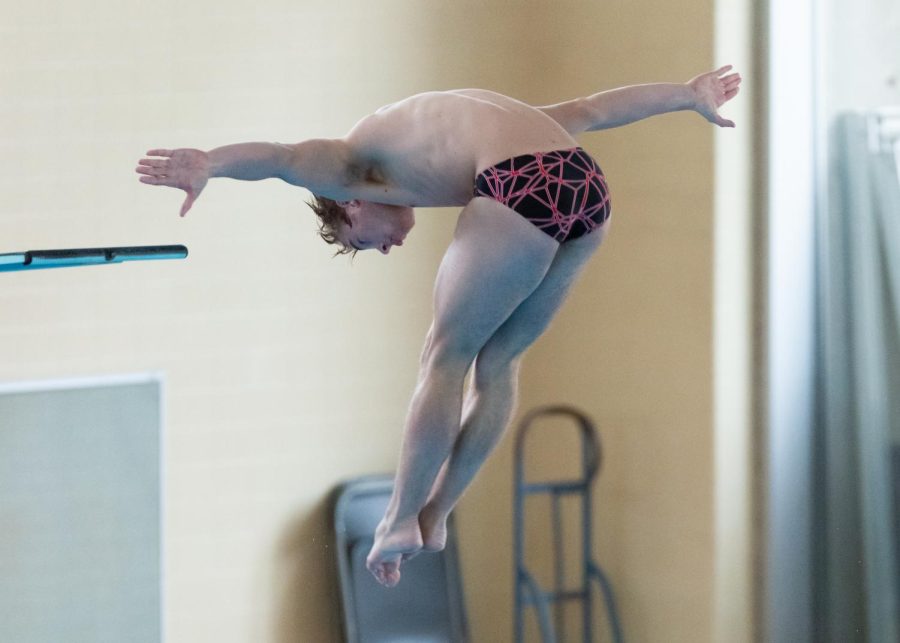 Diver during the swim and dive meet vs The Colo Mesa Mavericks on Jan 23, 2021 at the Ute Natatorium on campus. (Photo by Jack Gambassi | The Daily Utah Chronicle)

“We deliberately sought out this meet because it’s the best and most competitive diving competition of the regular season,” head diving coach Richard Marschner told Utah Athletics. “We know that it’s going to be an incredibly difficult competition but I know we have the team that can go out there and dive with the best in the country.”

The Utes kicked off the three-day invite on Thursday, Nov. 18. The diving team was able to earn three top-20 finishes on Thursday against the talented competition. Senior Tony Chen finished 15th in the 1m dive, earning a score of 302.85. Pac-12 Champion Luke McDivitt finished 16th, just behind Chen with a score of 298.05.

Junior Lexi Mills was able to have a strong performance in the 3m dive for the Utes, earning 15th place overall with a score of 280.90. Lizzy DeCecco, also a junior, finished with a score of 244.45 while freshman Holly Waxman earned a score of 244.00. Some strong individual showings from both the men’s and women’s teams helped to conclude day one of the competition, but the team looked to improve the next day.

Freshman Ben Smyth also earned his collegiate best of 306.70, while junior Jenner Pennock had a strong showing with a score of 267.45.

On the women’s side, DeCecco finished 10th on the 1m, with her season-best score of 264.00, just missing continuing on to the 1m final. Waxman also showed strength with a 13th spot finish, earning her a score of 253.40.

Coach Marschner was proud of his team after their improved performance on Friday.

“I had a strong feeling that we’d bounce back and have a really good day today and the team didn’t disappoint,” Marschner told Utah Athletics. “I can’t overstate how difficult the competition is here and we are proving that we belong with the diving blue bloods. I’m proud of our effort and I am looking forward to finishing with a great platform event.”

The Utes finished up the Texas Diving Invite on Saturday, Nov. 20. A day that will go down in history as an incredible day for Utah sports, the diving team showed strong.

The highlight of Saturday was McDivitt’s third-place finish on the platform. Against incredible competition, McDivitt reminded everyone why he was the Pac-12 Champion. McDivitt, also team captain for the Utes, had a final score of 377.35. Right behind him was Smyth, who continued his strong weekend with a final score of 363.85.

Marschner was thrilled with his team’s performance once again. The Utes did an incredible job of improving on the previous days’ performances.

“I couldn’t be happier with our performance today,” Marschner told Utah Athletics. “It’s a long meet and the team is worn down from our training, but we showed such great resilience and crushed it today.”

Marschner went on to talk about the specifics of the meet.

“Everyone kind of wonders how we continue to be so good at platform without having a 10m at home and it’s because we have the mental toughness and an expectation of ourselves that we’re going to succeed. Luke and Ben went toe to toe with a top-10 finisher at the Olympics and that’s incredible,” Marschner said.

The Utes faced a difficult task in going against plenty of ranked teams in the Texas Invitational. Despite the monstrous challenge, they went out and fought hard, and had some very impressive performances, showing the rest of the meet just how talented and disciplined they are. As Coach Marschner said, individuals went “toe to toe” with Olympic athletes, and it was impressive.

The Utes swimming and dive team will look to build off of this performance in two weeks, Dec. 3-5, traveling to Princeton, New Jersey for the Princeton Invitational.