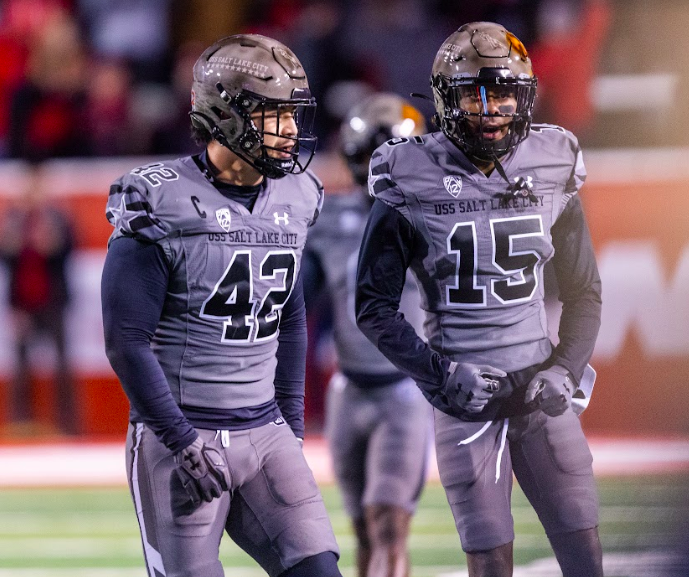 Junior captain Mika Tafua celebrating with his teammate Malone Mataele after rejecting a third down conversion against the Oregon Ducks in Salt Lake City, Utah on Nov 20, 2021. (Photo by Jonathan Wang | The Daily Utah Chronicle)

The Utes have taken complete control of the season after struggling early. Utah now holds a 7-1 conference record and has officially won the Pac-12 South after beating Oregon 38-7 in what looks like a preview of the Pac-12 Championship game.

Utah is currently on a four-game winning streak, having won seven of their last eight games with their only loss coming to Oregon State 42-34. Utah looks to extend their win streak to five on Friday as they face the Colorado Buffaloes.
Scouting the Utes
Ranking: No. 19 CFP

Utah has put on quite the show this season, clinching the Pac-12 South and defeating then No. 3 Oregon last week. Utah’s offense has been clicking on all cylinders, with their defense having big moments as well.

Colorado has given up 170.7 rush yards per game, and 248.1 pass yards per game. Utah should be expecting another big game from Tavion Thomas. If Thomas can get the rush game started for the Utes, many big passing opportunities will be opened up for Cameron Rising.
Utes to Watch
Dual-threat Offense
Thomas has been a large factor in this Utes offense, with 143 carries for 836 yards and 17 touchdowns. Thomas had 21 carries for 94 yards and three touchdowns last game against Oregon.

However, Utah doesn’t solely rely on rushing to win games, their passing this season has been phenomenal as well. Rising took over for Charlie Brewer early in the season and has proved all the doubters wrong. Rising has 158 completions on 251 attempts, totaling 1,930 yards and 14 touchdowns.

Rising also has a passer rating of 144.3, but he isn’t just a passing threat, he is also surprisingly capable at rushing. He has 50 carries for 329 yards and five touchdowns.
The Defense
Devin Lloyd has been the star of this Utah defense, with 90 total tackles and 21 tackles for loss. He has also been dominating offenses with three interceptions, one fumble recovery and one touchdown.

Nephi Sewell has also been dominating, racking up 67 total tackles along with one interception and one forced fumble.
Thoughts From Coach
“They have four wins this year… they’ve had ups and downs this season as we’ve all had, but they are well coached and have some good players. They are coming off a win against Washington, which gives them momentum a lot like when we played Arizona a couple weeks ago. They were really juiced up for the game and were ready to go, I expect that to be the same thing from the Buffaloes,” head coach Kyle Whittingham said to Utah Athletics.
Scouting the Buffaloes

Despite a less than desirable season, the Buffaloes played a great game against Washington, giving them some motivation heading into their matchup with Utah. Colorado’s defense shined against Washington, with Jack Lamb returning a fumble 88 yards for a touchdown. Their defense compiled two interceptions and two forced fumbles.

Colorado only put up 183 yards compared to Washington’s 426 and only got nine first downs compared to Washington’s 22, and yet still they found a way to win the game.
Buffaloes to Watch
The Running Backs
Jarek Broussard and Alex Fontenot have been putting up big numbers for Colorado. Broussard has 142 attempts for 661 yards and two touchdowns. Fontenot hasn’t had as many touches as Broussard, with 86 attempts for 299 yards and six total touchdowns. Both receivers are also receiving threats, both averaging 6.2 yards per catch.
The Defense
Both Mark Perry and Isaiah Lewis command this Colorado defense. Perry has 60 total tackles to go along with two interceptions and one fumble recovery. Lewis has 57 total tackles, also adding two interceptions.
How to Watch
The game will take place on Friday with kickoff set for 2 p.m. MST. The game will be broadcast on Fox. Fans can also listen in on ESPN 700, the Home of the Utes.