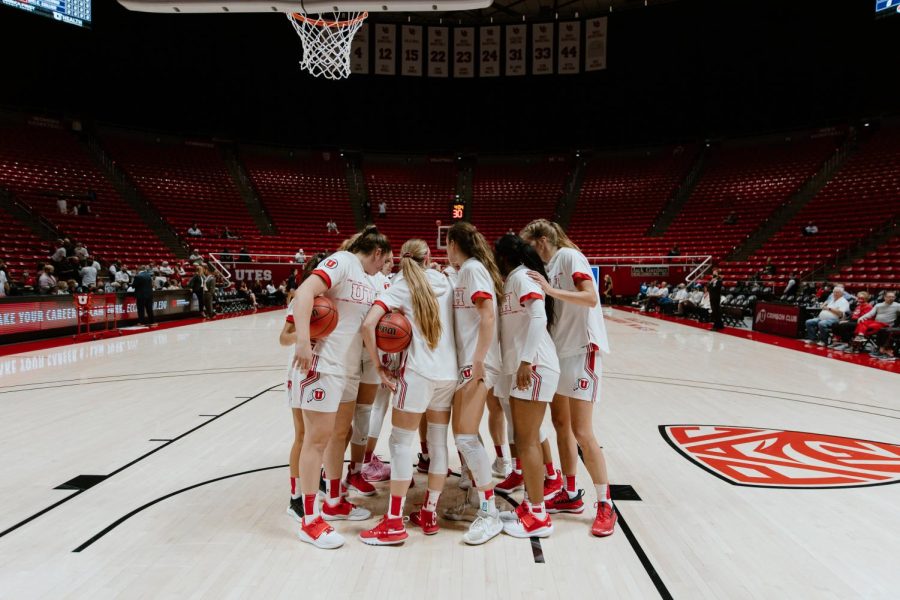 After a 4-0 start at home, including some record-setting offensive performances, the University of Utah women’s basketball team boarded a plane for the first time this season with their sights set on Hawaii and the Rainbow Wahine Showdown.

Three games in three days tested the Utes’ endurance and focus. Pristine beaches on your doorstep can test anybody’s focus though.

Utah dropped their first “road” test of the year to Gonzaga but responded well in wins against host Hawaii and the Panthers of Eastern Illinois.
Gonzaga Bulldogs 89 – Utah Utes 71
In a foul-laden game where the two teams combined for 45 fouls and 62 free throws, the Utes struggled to find any offensive rhythm all afternoon. Utah trailed the entire 40 minutes as they saw extended stretches of offensive struggles for the first time this season.

While the starters combined to shoot under 40% from the field, freshman Gianna Kneepkens kept them within range as she led the team with a career-high 15 points. Dru Gylten finished with 14 points and nine assists but struggled with turnovers as she gave the ball away four times.

Head coach Lynne Roberts spoke about the loss. “We got outplayed today in every area,” she said. “Gonzaga played a really good game. We started the game really slow and just got in too big of a hole. Gonzaga is too good to do that against. We’re disappointed in how we played, but we will learn and be better tomorrow.”
Hawaii Rainbow Wahine 57 – Utah Utes 73
In stark contrast to Friday afternoon’s game, Utah never trailed against host Hawaii, on their way to the fifth double-digit win of the season.

“Winning in Hawaii against Hawaii is never easy,” Roberts said. “We shot the ball well, crashed the boards, and found a way. I’m proud of our team for keeping their heads on straight and getting the win.”
Eastern Illinois 77 – Utah Utes 93
Utah came out of the locker room firing, connecting on their first eight shots of the game leading to a 34-12 lead after one quarter.

Freshman Jenna Johnson tied a career-high with 22 points, leading the team in scoring and rebounding with six boards. Johnson’s game has been efficient in the early season as she is second on the team in scoring, averaging 13 points per game and shooting 63.8% from the field.

Following the game, Roberts was not pleased with the defensive effort after building a big lead early.

“We relaxed defensively in the second half, but we got a good win against a good mid-major team,” she said. “Our defense needs to get better; in the second half, we were not very tough.”
By the Numbers
Kneepkens came off the bench to score a career-high 15 points against Gonzaga. She also went 3-4 from the three-point line.

Maxwell’s five threes against Hawaii is the third time she has made five triples in a game this season; just one shy of her career-high six, set in her freshman year against Colorado.

Johnson is third in the Pac-12 for field goal percentage this year, trailing post players Taylor Jones of Oregon State (68.4%) and Aaronette Vonleh of Arizona (67.7%). Vonleh is the sister of former NBA first round pick Noah Vonleh, who last played with the Brooklyn Nets during the 2020-2021 season.

Gylten’s 19 assists this weekend puts her in a tie with Karen Alcorn for sixth all-time on Utah’s assist leaders list. She now sits 12 assists from the top-five.
Coming Up
The Utes return to the friendly confines of the Jon M. Huntsman Center, where they are 4-0 on the young season, to face the  Brigham Young Cougars on Saturday, Dec. 4. This will be the first game between the two programs since a 77-73 Utah win in November of 2019. The Utes have lost four consecutive games to that team down south and are 9-12 all-time vs. the Cougars. The game can be streamed here and can also be found on ESPN700.

This article was updated on Dec. 1, 2021, to clarify information regarding the University of Utah women’s basketball team’s history playing against Brigham Young University. The last game played between the two teams was a 77-73 Utah win in November of 2019, not a 73-59 Utah loss in 2015. The Utes are 9-12 all-time vs. the Cougars, not 8-11.