No. 17 Utah Volleyball Falls to No. 11 BYU in NCAA Tournament 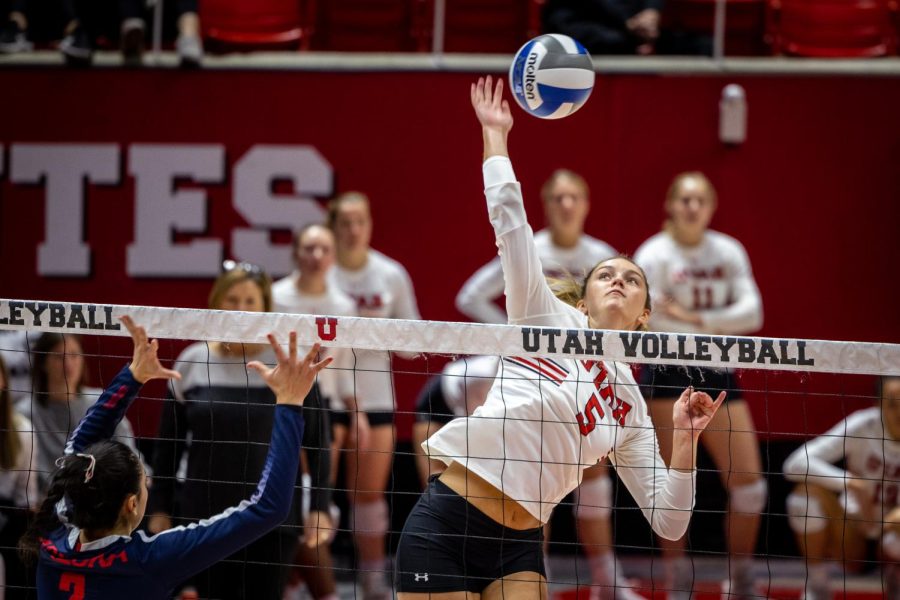 The University of Utah women’s volleyball team fell to BYU in the second round of the NCAA Tournament which closed out the season for the Utes. The Utes ended the season with a 22-9 record and played in their sixth straight NCAA Tournament.

The match was highly competitive as the two teams were fighting the whole match. BYU started the match with a 7-4 lead, but the Utes managed to win six points in a row which gave them the lead, 10-7. The Utes continued their momentum as they won the next five points, causing BYU to call a timeout. At 19-15, the Utes caught momentum again and closed out the set, 25-17.

The second set was tight. The largest lead was three points. At 12-12 in the set, Amelia Van Der Werff and Dani Drews both won a point with a block. Madelyn Robinson had a kill and put the Utes up 15-12. However, the Cougars came back and won six points to put them up 18-15. The Cougars maintained their lead and extended it to 23-18. The Utes continued to fight but the Cougars won the set 25-22.

In the third set, the Utes started from behind as the Cougars had a 16-9 lead and continued their momentum with a 23-15 lead. The Utes continued to fight and managed to only be down by a point. BYU managed to close out the set 25-23.

The fourth set went back and forth as both teams wanted the set. BYU managed to take the lead, 11-8, which caused Utah to play from behind. The Utes managed to come back and be down 18-17. From this point on in the set, the teams went back and forth. BYU was up 22-21 until Robinson and Van Der Werff had a block to tie the score up. Utah won the next point to give them a one-point lead until BYU called a timeout. After the timeout, BYU had a kill to tie up the score again and a block to go up 24-22. Utah called a timeout to stop the momentum but BYU closed out the set 25-22.

Over the course of the match, Drews had 18 kills and eight digs, Robinson had 17 kills and six digs and Stef Jankiewicz had a total of four digs and 47 assists, these seniors taking the floor for the last time as Utes. Allie Olsen had seven kills herself as well as four blocks, Zoe Weatherington had eight kills and Vanessa Ramirez had 13 digs.

The final match of the season was a battle, and after a long season, the Utes finished third in the Pac-12 conference and will be back next year to set new records.