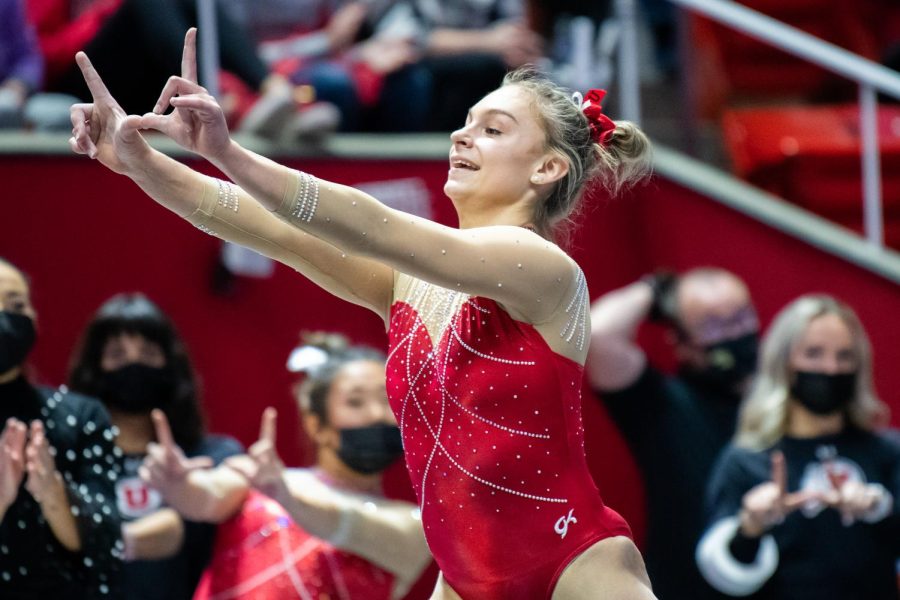 After a 2021 season that saw the University of Utah gymnastics team finish third at the NCAA national championships, the Utah Red Rocks come into the 2022 season looking to take the next step and win a national title. Utah opens up what they hope to be a championship season on Friday, Jan. 7, at the Maverik Center in the annual Rio Tinto Best of Utah meet. The No. 4 Red Rocks will face No. 19 BYU, No. 25 Southern Utah and No. 26 Utah State.

Before discussing Utah’s opponents on Friday, it is worth mentioning the great deal of excitement surrounding the Red Rocks coming into the season, as they are returning 12 of 16 gymnasts from last year’s team that finished third in the nation. Among the 12 returners are a handful of award-winning gymnasts, including four-time All-American Sydney Soloski, All-American Alexia Burch and All-Pac-12 selections Cammy Hall and Jaedyn Rucker, just to name a few.

Utah will begin Friday’s meet on beam. For this event, Red Rocks fans should look for All-Americans Abby Paulsen, Christal Isa and 2021 NCAA individual champion for both floor and bars, and seven-time All-American, Maile O’Keefe.

Friday will be the first chance for Utah fans to see the Red Rocks’ freshman class of four, which has been deemed as one of the best in school history, featuring multiple Olympians. Looking to make their Red Rocks debuts are 2020 United States Olympic alternative Kara Eaker, 2020 Olympic bronze medalist Amelie Morgan and 2020 Olympic silver medalist Grace McCallum. Also a part of Utah’s freshman class is Sage Thompson, a 2019 Junior Olympic national champion on uneven bars.

The University of Utah gymnastics team is incredibly talented, and if history is any indicator, the No. 4 Red Rocks are undoubtedly expected to finish on top this Friday. Utah has the upper hand in the all-time series against all three schools, with an all-time record of 101-2 against BYU, 27-0 against Southern Utah, and 92-3 against Utah State.

Make no mistake, however, as Utah’s history of success over these three schools, especially in recent years, is a reflection on Utah’s track record for producing elite teams, not a lack of talent from their in-state rivals. All three of Utah’s opponents finished last season ranked in the top 25 in the nation.

No. 19 BYU, who finished 2021 also ranked 19th, is led by senior floor specialist Brittney Vitkauskas. Vitkauskas was the 2021 Mountain Rim Gymnastics Conference (MRGC) Floor Specialist of the year, and was All-MRGC First-Team floor.

Gymnastics is arguably Southern Utah’s most elite athletic program, as despite being a relatively small school, the Thunderbirds have a national presence in the world of gymnastics, coming into the 2022 season as the No. 25 team in the nation after finishing 2021 at No.23. Keep an eye out for senior Karley McClain, an all-around gymnast who was an MRGC All-Around All-Conference First Team selection as well as CO-MRGC Floor Specialist of the year in 2021.

Led by 2020 MRGC Freshman of the Year and 2020 MRGC Co-Beam Specialist of the Year, Sofi Sullivan, the Utah State Aggies enter 2022 ranked No. 26 in the nation. The Aggies have produced some of their strongest teams in program history in recent years, finishing No. 25 nationally in 2021.

Friday’s meet should ultimately be an interesting one, as the Red Rocks, who are exciting to watch on their own, are facing three quality opponents. Nonetheless, anything except a first-place finish would be a disappointment for University of Utah gymnastics. The Red Rocks need to ensure that they are focused on the task at hand, as it might be easy to look forward to next week when they face No. 2 Oklahoma at the Huntsman Center in their most anticipated meet of the season.

If you haven’t done so already, get your tickets to the Rio Tinto Best of Utah meet at the Maverik Center. Tickets start as low as $25.