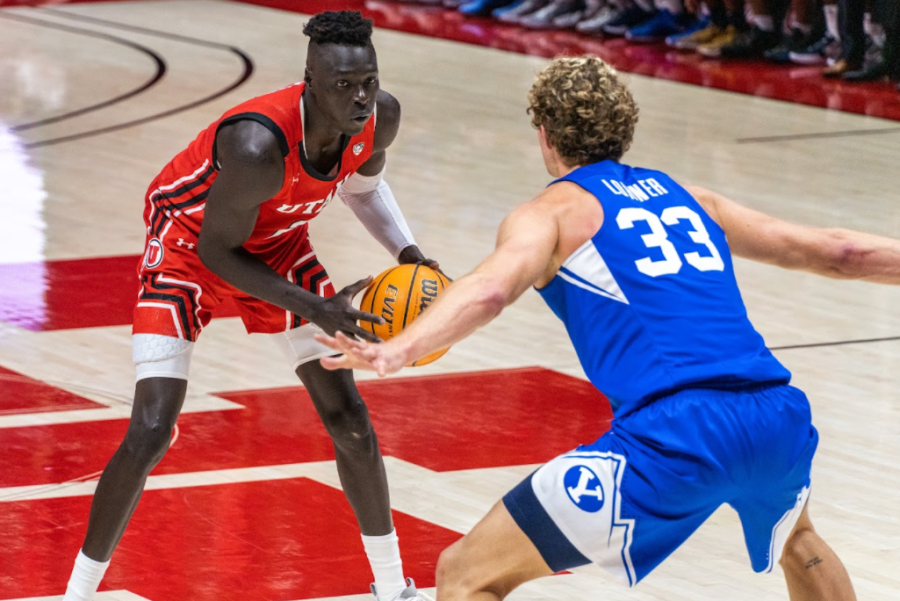 The University of Utah men’s basketball team suffered their fourth consecutive loss on Saturday at the hands of the Washington State Cougars. They’re 8-8 on the year, 1-5 in Pac-12 play.

Branden Carlson missed today’s game with appendicitis, and Lahat Thioune started in his place. Thioune had a strong start to the game, picking up an offensive rebound and getting a few jump hooks to drop. Utah missed Carlson’s presence on both ends as the game went along.

Washington State was hot from three early in this one, starting 5-8. Utah did a good job defending the paint for the first few minutes of the game, and they forced the Cougars to settle for jumpers, but WSU made them pay by hitting their shots. The paint defense wore down as the first half went along, and the Cougars went to halftime with 18 points in the paint.

Utah cut down on the turnovers from their last time out, finishing with seven in the first half. They had 11 against Washington on Thursday. Still, some of the same issues popped up today. The offense stalled for certain stretches, they had a hard time defending the three, and they allowed multiple big runs from the opposing team. All of this contributed to a ten-point halftime deficit, 40-30 as the Utes tried to avoid losing their fourth game in a row.

The Utes’ offense really sputtered to begin the second half. It emphasized a trend that has been a problem all year: when shots don’t fall, Utah has no backup plan. The Utes have a ton of should-be shooters on the roster, but none of them are consistently great. Lazar Stefanovic, Gabe Madsen, David Jenkins Jr., Both Gach, Rollie Worster, Riley Battin and even Eli Ballstaedt have shown the ability to get hot from deep, but when they’re all cold the Utes have no other options.

“We missed a lot of clean looks that just didn’t fall,” said head coach Craig Smith. “It’s always nice to have a lead guy … we need to establish who that lead guard is.”

They struggle to score the ball inside, they can’t get open for jump shots, and they’re sloppy in transition. The threes that are open don’t go in nearly as often as they should. All of that contributes to some ice-cold stretches, and that’s often the reason for losses. Without Branden Carlson and his versatile offensive game, these issues were even more pronounced today.

Utah made multiple runs to attempt to get back in it, but WSU tightened up on defense to put the game out of reach every time. Ultimately, Utah didn’t have enough gas in the tank and suffered their fourth consecutive loss, 77-61.

The Utes need to find some answers, and quick. They’re already in the basement of the Pac-12, and they’re in danger of staying there for the long haul if they can’t break out of this rut. They hit the road to face Arizona State and Arizona next weekend.