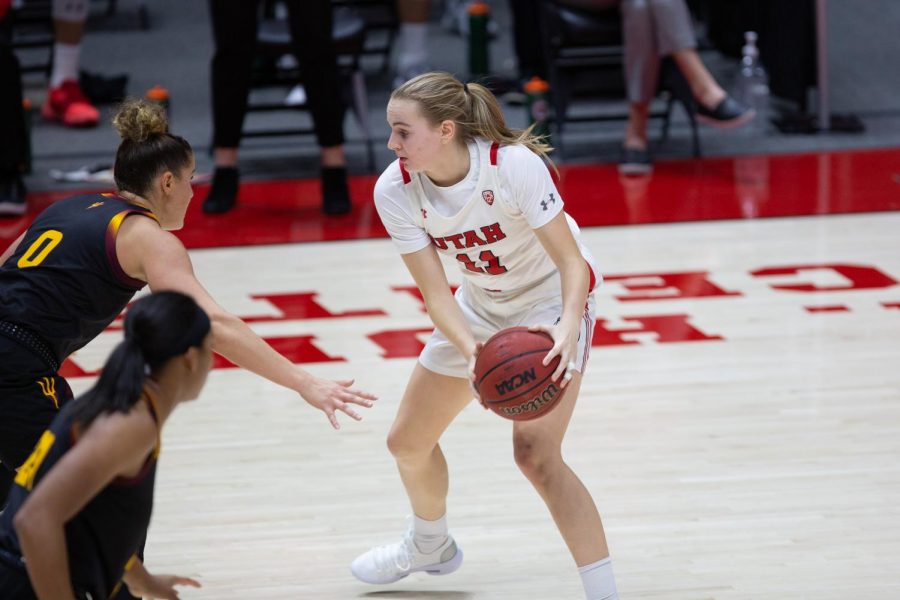 University of Utah women's basketball player, Brynna Maxwell (#11), holds the ball on offense in the game against Arizona State University in the Jon M. Huntsman center in Salt Lake City on Dec. 18, 2020. (Photo by Jack Gambassi | The Daily Utah Chronicle)

After a nearly three-week hiatus, the University of Utah women’s basketball team is set to return to the floor Thursday night against the University of California, Berkeley, at the Huntsman Center. After falling to Oklahoma on Dec. 21, the Utes went into the Christmas break with a solid 8-3 record, and were scheduled to face the University of Oregon on New Year’s Eve to open up Pac-12 conference play.

As most are aware, however, the omicron variant of COVID-19 has ravaged Salt Lake City in recent weeks, and several members of the University of Utah women’s basketball team were among the victims of this spike in cases. During this stretch, the Utes had four Pac-12 matches postponed, including games against Oregon State, UCLA and USC in addition to their game against Oregon.

With this in mind, Thursday will be Utah’s first conference matchup, and they face a California Golden Bears team who, despite being 0-2 in conference play, has posted a respectable 9-4 overall record this season. California is coming off an 88-53 drubbing by the Oregon Ducks.

This season, the Golden bears are led by freshman forward/guard Dalayah Daniels, who has averaged 11.9 points per game. Utah will also have to keep an eye out for sharpshooter Leilani McIntosh. The sophomore guard leads California with 18 three-pointers on the season and has averaged 10.1 points per game.

The Utes, on the other hand, are highlighted by ringer Brynna Maxwell, a junior guard who has put up an impressive 32 baskets from beyond the three-point line in just 11 games played this season. Freshman forward and Utes’ overall leading scorer, Jenna Johnson, also looks to pick up where she left off before the break. In 11 games, Johnson has averaged 13.8 points per game.

In order to stop Maxwell and Johnson, California will have to contain assist queen Dru Gylten. Gylten, a senior guard, has a whopping 67 assists on the season for the Utes and has been a catalyst behind Utah’s offense so far.

While California has a winning record on the season and will certainly pose a challenge for the Utes, Thursday’s game is perhaps a good warm-up for the Utes to shake off any rust they may have accumulated over their three-week break, as the Utes are set to host No. 2 Stanford at home on Sunday.

This pandemic-induced break came at perhaps the worst time possible for the Utes, as they now jump right into league play. The Utes hope this will be the last outbreak they face this season, but the pandemic is still in full force not just in Salt Lake City, but throughout other PAC-12 cities. Indeed, the University of Utah men’s basketball team had their game this week against Arizona State postponed due to an outbreak within the Sun Devils’ program.

Tickets are still available for tomorrow night’s matchup. Grab a mask and head down to the Huntsman Center tomorrow night to cheer on the Utes, tip off is at 7 p.m. MST.