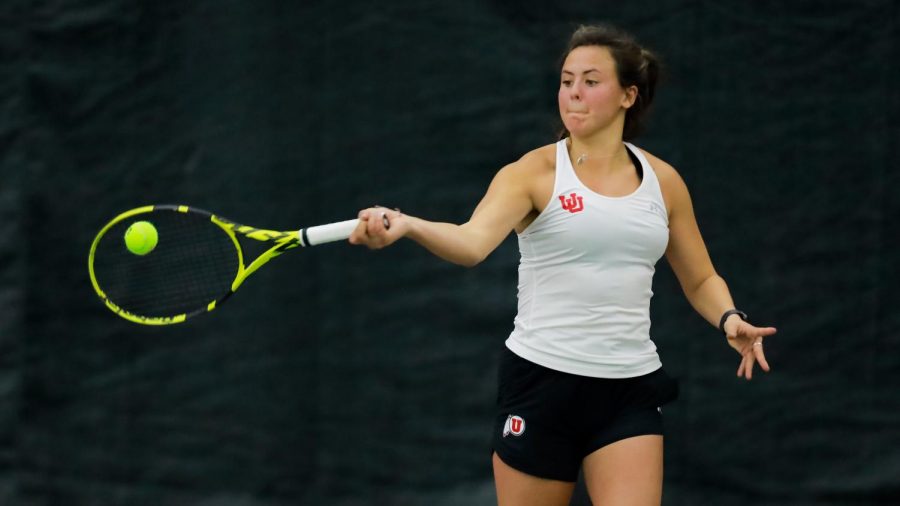 The Utah men’s and women’s tennis teams competed in their first match day of the season this past Saturday. Each team competed in two singles and two doubles matches with the first sets being at 9 a.m. and 12 p.m. MST and the second sets being at 3 p.m. and 6 p.m.
Women’s Duos
The Utah women went up against Dixie State in their first matchup of the season and played their first games at 9 a.m. The day started with doubles as Madison Tattini and Linda Huang of Utah went up against Juliana Honczaruk and Rachel Mellor of Dixie State (DSU). The match was by far the closest of the first set, as they were tied 5-5 but luckily Tattini and Huang clutched up when it mattered most and won the last two games to win 7-5.

Emily Dush and Anastasia Goncharova (Utah) went up against Alexandra Hildreth and Angelina Amelkina (DSU) in which Utah won by the largest margin of the first three matches 6-1.

The final matchup of the first doubles set was Lindsay Hung and Katya Hersh of Utah facing Sabrina Longson and Ya-Chi Hsu of Dixie State, the Utah duo winning 6-2. Utah swept DSU 3-0 and in turn, won their first point of the season in convincing fashion.

In the second and final doubles match of the day at 3 p.m., Tattini and Huang matched up against the same Dixie State duo and won again 7-5 which was also the closest match of the second set. Dush and Goncharova matched up this time against Longson and Hsu and still took care of business, winning 6-4 and securing the second point of the day for Utah.

The dynamic duo of Hung and Hersh matched up against Hildreth and Amelkina and eased their way to a 6-1 win while also becoming the duo that conceded the least amount of games (3) between the 2 sets. Katya Hersh would be my pick for duos MVP for her consistency and energy throughout the matches, and clearly, others noticed as well as she got Player of the Match.
Women’s Singles
The singles matches followed the doubles and it was clear that the momentum and confidence from doubles carried over with each player. In the first set of singles, Linda Huang (Utah) faced off against Alexandra Hildreth (DSU) where she coasted to two 6-1 victories. Emily Dush (Utah) went up against Angelina Amelkina (DSU) where she swept both of her matches 6-0.

Lindsay Hung (Utah) matched up with Ya-Chi Hsu (DSU) where she also swept her way to two 6-0 wins. Anastasia Goncharova (Utah) and Juliana Honczaruk (DSU) went at it with Goncharova coming out on top 6-0 and 6-3. Madeline Lamoreaux (Utah) was the first to finish her match against Sabrina Longson (DSU), beating her 6-0 in both matches.

The final singles match of the first set was Madison Tattini (Utah) and Rachel Mellor (DSU) and Tattini won both matches 6-0 and 6-2. With a straight sweep, Utah won the first game against Dixie State 7-0 in what was the best possible way to open the season.

In the second set and final singles set of the day, Huang faced off against Amelkina. Huang was on her A-game, winning both matches 6-0 in a perfect sweep.

Lamoreaux went up against Mellor this time and Lamoreaux won again, going 6-1 and 6-4.

The final match of the women’s day was Hersh against Longson, and Hersh, who was my doubles MVP, won her singles match as well 6-3 and 6-1. Madeline Lamoreaux, although she didn’t have the best overall record, was my singles MVP for just how dominant she was in her first match. With the second clean sweep of the day in singles, Utah won 7-0 again and finished the day 2-0 in what was the strongest possible start to their season. The Utah Women are home against Montana at 10 a.m. and Seattle at 4 p.m. on Jan. 22.
Men’s Doubles
The Utah men faced Idaho State in their first match day of the season starting the day with doubles at 12 p.m.

Francisco Bastias and Bruno Caula of Utah matched up against Patrik Trhac and Patrick Kristensen of Idaho State (ISU) and Utah won the match 6-4. The next match was between Utah’s Franco Capalbo and Geronimo Espin and Idaho State’s Wikus Robbertse and Andreas Kramer, where Utah came out on top 6-4 and won the first doubles point of the day.

Jayson Blando and Rian Ta (Utah) faced Hiroki Fujita and Ege Cankus (ISU), however the match was called off at 4-4 due to the team already securing the point. In the second and final duos set of the day each duo had the same matchup. Capalbo and Espin dominated their way to a 6-1 win, and Blando and Ta won their matchup 6-3.

Bastias and Caula were down 5-4 before the match was called with Utah securing the second doubles point of the day and sweeping a tough opponent in Idaho State. My MVP choice for the doubles was Geronimo Espin because he was very active up front and crucial to gaining both points for the team.
Men’s Singles
After the doubles, it was time for the singles matches where the Utah men would see a much tougher road ahead. Franco Capalbo (Utah) faced off against Patrik Trhac (ISU) in what would be one of the closest matches of the day. Capalbo won the first set 6-3 with Trhac winning the second set 6-1, however Capalbo came through in the clutch and won the third set 7-6(1).

Francisco Bastias (Utah) matched up with Andreas Kramer (ISU) where Bastias won in straight sets 6-4. Geronimo Espin (Utah) went up against Hiroki Fujita (ISU) in which Espin swept the first set 6-0 and won the second set 7-5. Bruno Caula (Utah) and Ege Cankus (ISU) went head to head and Caula came out on top winning 6-2 and 6-3.

Bruno Krenn (Utah) faced off in the second triple set match of the day against Patrick Kristensen (ISU), where Krenn would win the first set 6-2, followed by a Kristensen win of 6-3, but finally, Krenn would come through and win a tight third set 7-5. Jayson Blando (Utah) was also a part of the third triple set match against Ethan Lye (ISU), as he swept the first set 6-0. Lye won the second set 6-4, however Blando eased to a win in the third set 6-1.

With a clean sweep, the men won the first game 7-0, however things would only get tougher in the second singles set. Capalbo and Trhac had a close match this time however not as crazy as the first. Capalbo won the first set 6-3 and won a close second set 7-5. Bastias again beat Kramer this time going 6-4 and 6-2.

Espin matched up with Cankus in what would be the second and final three-match set. Cankus won the first set 6-3, with Espin winning the second 6-4 and the third set 10-5. Krenn and Kristensen went at it once more, this time with Kristensen gaining ISU’s only point winning in straight sets 6-4 and 7-5.

Blando and Lye faced off again with Blando dominating once more 6-2 and 6-1. My singles MVP would be Jayson Blando for not only clinching the triple set match point convincingly, but also dominating his second meeting with Lye. With a 6-1 game in the second singles set, the Utah men won again 7-0 and also started their season as strong as possible going into next week 2-0. The Utah men’s team will play away at Denver on Jan. 21 at 6 p.m.