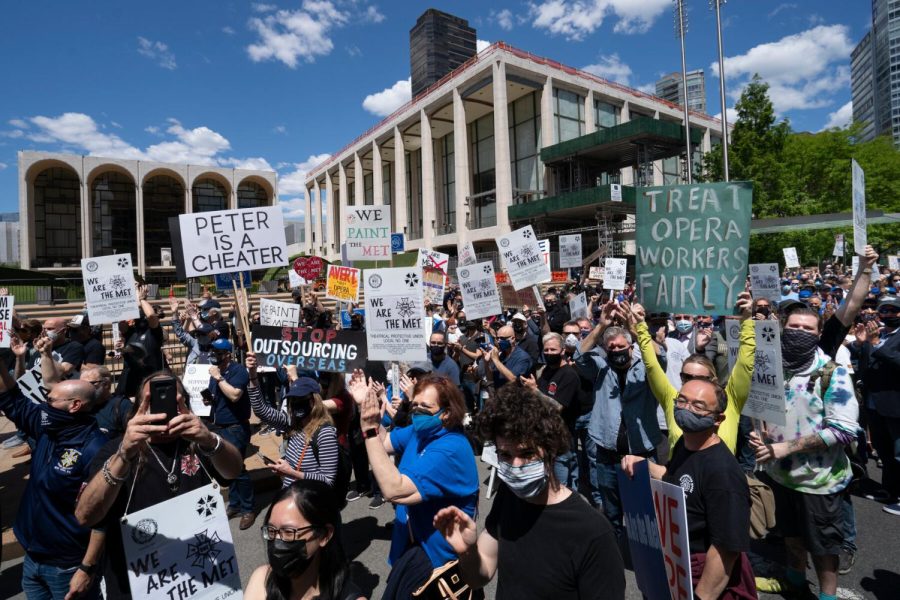 The concerns of entertainment and gig workers have come to a head as television and film became the main source of entertainment during the COVID-19 pandemic. As streaming companies worked to push out new content for the masses who weren’t attending live performances, the already questionable working conditions of the film industry were pushed to their limits.

The unfortunate — and sometimes scary — truth is the underbelly of these operations. Shows that are hastily mass-produced with crews that are under-trained, under-supported and under-prepared lead to problems: long working hours, not enough time in between shifts, low wages and unclear benefits, especially for shows made strictly for streaming services. National discussions about working conditions are now taking place, supported and affected by local chapters of various entertainment unions.

IATSE’s Fight for Agreement
On Oct. 4, 2021, the International Alliance of Theatrical Stage Employees announced that they were going to authorize a strike against the Alliance of Motion Picture and Television Producers in hopes of pushing the organization to accommodate more humane working conditions.

As of Oct. 16, IATSE and AMPTP had reached a “tentative agreement” towards creating a contract that would resolve conflicts within the industry at the surface level. By Oct. 21, IATSE had released three one-page documents, covering streaming conditions, working conditions and economics as well as the priorities of their membership toward agreement, and by Oct. 28, all 13 IATSE West Coast Studio locals issued a joint statement recommending members vote to ratify the tentative Hollywood Basic Agreement.

IATSE Local 99, based in Salt Lake City, is the union behind entertainment in Utah and Southern Idaho. Before the strike authorization had passed, the local union supported the efforts, posting a video to their Facebook page with the text, “We need a living wage. We need time to sleep. We need better conditions for streaming content. This is about our health […] This is about our future. Vote yes for the strike authorization.”

On Nov. 15, CNBC reported that IATSE “have ratified two contracts with Hollywood’s studios that address the union’s call for better working hours, safer workplace conditions and improved benefits.” The vote was close — 56% in favor of the contracts, 44% voting “no” — with 72% of membership voting.

“Throughout these difficult negotiations, we remained steadfast and resolved in our determination to achieve a contract that is fair and works for the members,” said union President Matthew Loeb. “We succeeded in reaching our objectives but make no mistake, this would never have been possible without the overwhelming showing of support demonstrated by the strike authorization vote. We showed our power and it worked.”
Dangerous Conditions on Display
Amid all of the IATSE news, a cinematographer was fatally shot during the filming of a low-budget movie titled “Rust,” written and produced by Alec Baldwin (“30 Rock,” “Saturday Night Live”), who also stepped into the leading role in the film. On Oct. 21, Baldwin accidentally shot and killed cinematographer Halyna Hutchins, also injuring director Joel Souza.

Baldwin had been calling this a “well-oiled crew” in the small dialogue he has had regarding the incident, despite the evidence suggesting otherwise. According to information received by The New York Post, a large number of the camera crew walked off of the set because of the poor gun safety practices just hours before Hutchins and Souza were shot. Up to this point, there had been multiple complaints to production managers and three accidental discharges, and even a moment where an actor was told a gun was “cold” despite it having ammunition in it. Even the assistant director David Halls had said it was a “cold gun” before handing Baldwin the weapon that would end up killing a member of his crew.

The murder of Hutchins was preventable, and the “well-oiled crew” that Baldwin speaks of was either begging for change or existing in ignorant bliss.

As of Nov. 10, head electrician Serge Svetnoy has filed the first lawsuit against Baldwin, but news on the production and safety concerns surrounding it are still developing.
Entertainment from Here
The discussion of change within IATSE, the incident on the set of “Rust” and other problems surrounding film and television working conditions are going to push for a transformation of the industry and encourage more talk about safety in the workplace. Many petitions have been created, with some filmmakers vowing to never use a real firearm on set again. It is a tragedy and a shame that Hutchins had to act as a catalyst for the possibility of change to come into play.

As stated before by news and media outlets before the initial IATSE strike, union strikes could and would halt all roll-out of any film or television programs, specifically those made for streaming services. While a contract was reached with IATSE, the evidence of unsafe and unhealthy working conditions will continue to prove to producers that artists deserve to be protected and that the bare minimum is no longer acceptable.

In a quote from IATSE’s Dec. 14 bulletin, the momentum garnered towards positive change is not understated: “We are already exploring ways to harness the solidarity and energy of the last few months of 2021 and carry it forward. As with every contract cycle, members’ input will be sought.”