Utah Men’s Basketball Comes Up Short Against No. 16 USC 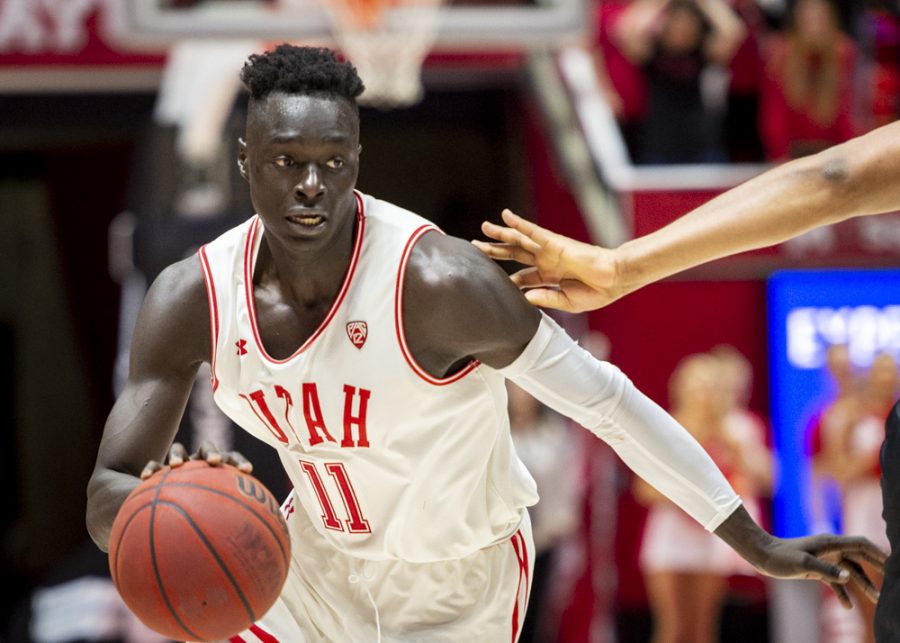 University of Utah sophomore guard Both Gach (11) drives towards the basket during an NCAA Basketball game vs. the University of Colorado at the Jon M. Huntsman Center in Salt Lake City, Utah on Saturday, March 7, 2020. (Photo by Kiffer Creveling | The Daily Utah Chronicle)

The University of Utah Runnin’ Utes had lost seven consecutive games coming into Saturday afternoon’s contest against the No. 16 USC Trojans at the Huntsman Center. For what it’s worth, however, things were seemingly starting to look up for Utah this season after a nail-biting 63-58 loss to No. 9 UCLA on Saturday.

To a certain extent, the Utes’ momentum seemed to carry over into the first 10 minutes of Saturday’s affair, as Utah and USC were tied 11-11 roughly halfway into the first half. Then, things started to fall apart for Utah. USC would go on an 18-3 run, which saw a missed dunk and even an airball from the Utah side during this stretch.

With roughly five minutes left in the first half and the shot clock running down, Utes guard Gabe Madsen took the ball into the corner and chucked up a prayer as the shot clock expired, and ended up nailing a three-pointer to end Utah’s scoring drought. He would hit another three-pointer the next possession to keep Utah at least somewhat within striking distance, 33-20.

Utah would continue on a solid run, and with roughly ten seconds left in the first half and the shot clock once again expiring, Madsen threw up another prayer of a shot while doubled teamed from the same corner spot he hit a shot from earlier. Madsen would ultimately hit this three-pointer, bringing Utah all the way back to within just five points. The crowd, which was about as numerous and loud as you would expect for a Saturday afternoon game, came alive for what seemed like the first time of the contest. The score would be 35-30 at halftime.

At halftime, the Utah basketball program officially retired the number 20 in honor of Runnin’ Utes legend Wat Misaka. Misaka, who passed away at the age of 95 in 2019, was an integral part of Utah men’s basketball’s national championship teams in 1944 and 1947. Misaka played for the New York Knicks and was the first non-white player in modern professional basketball.

With five minutes remaining in regulation and the Utes down by nine but looking as if they were starting to gain some momentum, a blatant missed travel call from USC which resulted in an alley-oop dunk for the Trojans caused the Huntsman Center to erupt in boos. USC guard Drew Peterson would subsequently hit two quick three-pointers in the following minutes to make the score 73-59.

After a timeout was called by Utah with 2:39 on the clock, the Huntsman Center began to evacuate as fans prioritized beating traffic over watching the remainder of what would prove to be Utah’s eighth consecutive loss, 79-67. Utah’s leading scorer was Greg Madsen with 20, and USC was led by Drew Peterson with 23. Utah falls to 8-12 and 1-9 in conference play, while USC improves to 16-2 and 6-2 in conference play.

“There were some bright spots tonight and I thought our young guys played well,” said head coach Craig Smith, “it was a tough matchup for us. They (USC) have some great guys on their team and when a guy like Peterson plays like that, they’re a team that could win it all.”

For what it’s worth, Utah is in a full-fledged rebuilding season and they put up a decent fight against two top 20 teams this week, No. 9 UCLA and No. 16 USC. Utah will now travel to the state of Washington to face Washington State in Pullman on Wednesday, and the University of Washington on Saturday.