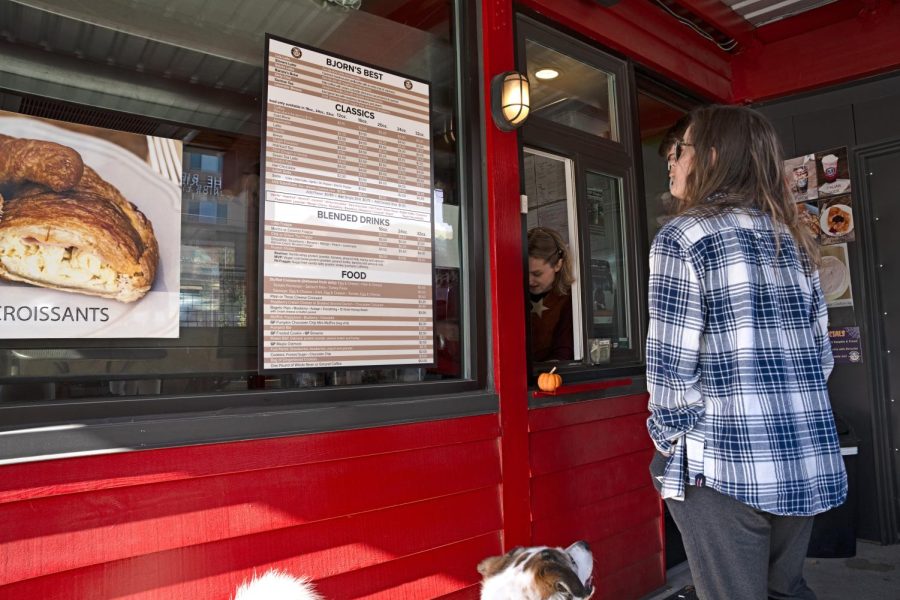 Bjorns Coffee off Foothill Drive in Salt Lake City is busy helping customers get their caffeine fix in the morning on Saturday, Oct. 30, 2021. (Photo by Kevin Cody | The Daily Utah Chronicle)

For the past two years, I’ve worked as a server at a restaurant in Ogden, where I earned less than the minimum wage, at the “tipped wage.” My hourly pay was $2.30 an hour, unlike other servers in the state, who typically earn $2.13. The two-week paychecks I brought home ranged between $0 and $25. And on multiple occasions, I’ve owed my employer money from my tips because my paychecks didn’t fully cover taxes.

My experience isn’t unique. Ask any Utah server earning tipped wages: our pay is unstable and not guaranteed. No matter how hard we work or how well we treat customers, we have to rely on the generosity of others to live. Unfortunately, Utah law allows for employers to pay workers earning tips a sub-minimum wage. But no one’s job should rely on tips because tips are not a living wage. They never have been and they probably never will be.
The Realities of Tipped Wages
Working as a server is incredibly stressful, especially during college. I did it because I loved the restaurant I worked at. It’s upsetting when people ridicule me for choosing to work a job based on tips. How can one demand a service and then not pay for it? After all, people don’t have to tip a doctor or police officer for their services. We shouldn’t reduce people’s pay for doing their job in the first place.

Tipping habits today differ from pre-pandemic tipping. Right now, people tip lower and less frequently. More people stiff, which impacts servers’ earnings. The average Utah server earns $10 per hour, which cannot sufficiently support one adult living alone. For this reason, I stayed home and lived with my parents. I simply could not support myself on a tipped wage.
Unviable Solutions
A few possible solutions to ease the pay struggles faced by servers include raising the minimum wage or enforcing people to tip with auto-gratuity. But unfortunately these solutions are not sufficient to end server pay problems.

With auto-gratuity, restaurants could enforce a “service charge” for customers to pay as a way to guarantee servers’ earnings. However, it could force customers to pay for subpar service that they don’t want to pay for, or cannot pay for. Businesses also veer away from auto-gratuities because they are unfavorable for tax purposes and include additional work to comply with tax and labor laws. Service charges could also anger customers who don’t read the fine print or don’t know about the charge, which could result in a loss of customers for a business.
The Right Thing To Do
Instead, restaurant employers should pay servers living wages so that tips aren’t their primary source of income. If restaurant owners can keep a business up and running and pocket the profits, they should pay all of their workers living wages.

Right now, Utah restaurants have struggled to stay afloat, even as COVID-19 cases plateau and people dine in more. Despite steady restaurant income, server pay has been drastically reduced. Because of this, many restaurants are under-staffed and scrambling to hire new employees while maintaining their current staff — many of whom are overworked and underpaid. Quality of serving has also taken a hit, including dining hours, menu availability and wait-time for food.

Restaurant owners need to pay their employees living wages as more and more of the workforce recognize their worth and refuse to be exploited.

If the average Utah server brings home only $400 a week after working 40 hours and cannot support themselves, they obviously aren’t getting paid enough. Many servers in Utah face this sad reality as restaurants continue to exploit servers with a tipped wage. Raising the tipped wage to a living wage is the only solution to ending the agony servers face in supporting themselves. Restaurant workers have suffered enough and the change that needs to happen starts with restaurants themselves.