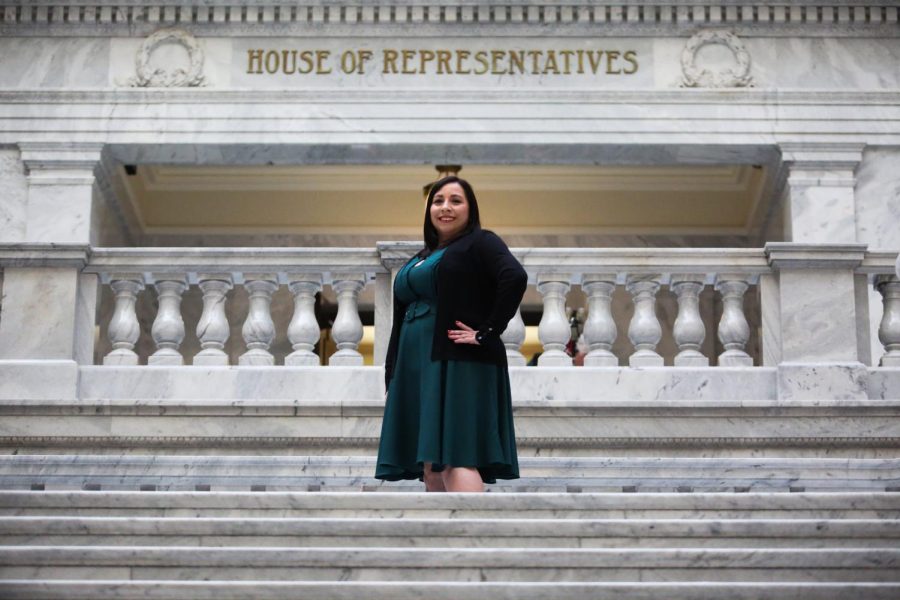 I attended high school in South Dakota, which resides on the stolen land of the Dakota, Lakota and Nakota. The Feathering and Honoring ceremony, an important part of my high school’s graduation week, honored graduates with plumes and eagle feathers since it’s the highest honor within Lakota culture. Graduates wear this regalia received to the general graduation ceremony in addition to the Lakota honor song performed at the beginning of the ceremony. I appreciated the Lakota culture reflected in my school’s graduation festivities. It doesn’t compensate for our continuous harms inflicted on Indigenous communities, but it does promote much-needed visibility of Native culture in our schools.

Unfortunately, in Utah, not all schools value such traditions and don’t allow students to wear Native regalia. Rep. Angela Romero proposed House Bill 30 which would allow any student “who is enrolled, or is eligible to be enrolled, as a member of a tribe” to wear tribal regalia at their high school graduation. We must pass H.B. 30 to honor Native students and provide important visibility to the Indigenous community in Utah.
Background
Before the session, the Paiute Indian Tribe of Utah approached Rep. Romero and Sen. Jani Iwamoto to sponsor the bill. In an October interim meeting of the Native American Legislative Liaison Committee, Romero shared the story of a student whose school initially approved her to wear beads and feathers on her graduation cap. But they told her last minute that she couldn’t wear them. Romero modeled the bill after similar laws in Arizona and Montana, states which also have large Indigenous populations. Montana tackled this issue in 2017, leaving Utah with a long ways to go.

The current bill language states ,“A [local educational agency] may not prohibit a qualifying student from wearing tribal regalia.” It also defines tribal regalia as “traditional dress” and “recognized objects of religious or cultural significance.” The bill furthers that items of “cultural significance” can mean “tribal symbols,” “beads” and “feathers.” The fiscal note explains that this bill will cost nothing to the state or local governments, so the cost would not be a concern.
Honoring
Eagles hold spiritual significance to many communities as it is believed that eagles have a special connection to God. The Native American Rights Fund explains that eagle feathers “represent honesty, truth, majesty, strength, courage, wisdom, power, and freedom.” In Native communities, people give eagle feathers to one to honor important life accomplishments such as graduation ceremonies.

Lornie D. Pinnecoose, Title VI American Indian Education Coordinator at Salt Lake School District, explained in an interview how special he felt at his associate’s degree graduation because of the feathers on his cap. “[Native regalia is] a culture representation on [the students’] behalf,” Pinnecose said. He furthered that this regalia connects them to their tribes and ancestors.

Nationwide, there’s a wide mix of policies on Native regalia at graduation. Some schools have distinct policies for wearing an eagle feather at graduation. Other schools allow a student organization representing Indigenous groups to handle the distribution of honor cords and eagle feathers. Pinnecose coordinates this process in the Salt Lake district. He works with his friend from the Urban Indian Center to design and create their graduation stoles and caps.

Utah overall had a 88.2% high school graduation rate in 2020. Native American students had a 6.4% decrease in graduation rate from 2019 to 2020 with a 72.9% graduation rate. Native American students face systemic barriers to graduating. We should honor Native students for their accomplishments in a culturally significant way.
Visibility
As an honors student, I wore National Honor Society graduation cords and a special tassel at graduation without objection. I also wore cords for my involvement in debate, robotics and summer programs. I received applause for my visible involvement and no one objected to this form of recognition. This is indicative of my privilege as a white woman.

Like my honor cords emphasized my extracurriculars, Native regalia at graduation brings attention to Native students’ culture. Many of us lacked appropriate education of Native American history and culture in school, and we continue to ignore pressing issues that affect Indigenous peoples. Allowing Native regalia at graduation brings crucial visibility to Native American students — students with a culture otherwise invisible in our public-school system.

Throughout the Utah State Legislative Session, we can make our legislative priorities know. We must call and email our legislators to encourage them to support the Student Tribal Regalia Use Amendments.

Moving past the session, we should contact our lawmakers to encourage them to advocate for legislation focusing on other Indigenous issues. Tribal regalia controversies are only one disparity faced by Native communities. We must better advocate for Native Americans in all aspects of public policy, and passing this bill is an important first step.