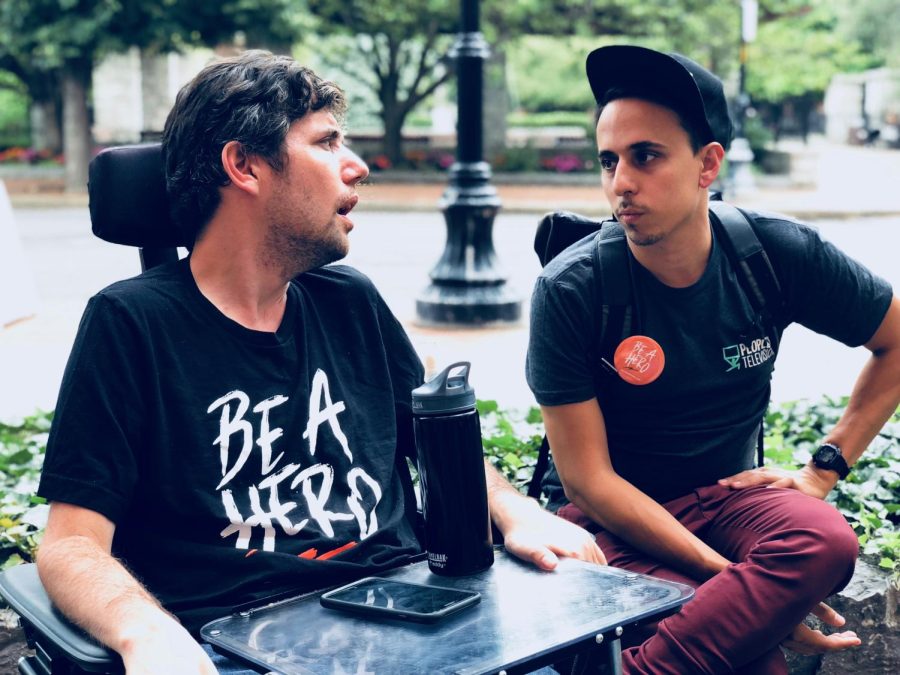 “Not Going Quietly” on activist Ady Barkan’s journey with ALS premiered Jan. 24 on PBS as part of the Point of View documentary series. The documentary was directed by Nicholas Bruckman. His previous works include “Valley of Saints” and “La Americana” among others. “Not Going Quietly” tells Ady’s story campaigning for healthcare access. He also protests for the voices of people with disabilities to be considered and heard by lawmakers.
Not Going Quietly
Bruckman met Barkan in 2018 shortly after Bruckman’s conversation with Sen. Jeff Flake on an airplane went viral. He spoke to Flake about the GOP tax bill and its impact on accessibility to healthcare for Americans in need. Bruckman described the experience of making the film in an interview. He discussed the difficult moments of Ady’s journey and celebrated the good times found on the road. “The whole journey of the film was really emotional obviously because I became really close to Ady, spending so much time with him,” Bruckman said. “That is difficult — to see somebody that you care about a lot go through a disease like ALS. But there were so many moments in making the film that were actually really fun and really joyous.”

Those joyous moments are palpable throughout the documentary. The viewer may also find themselves moved by the resilience and hardships captured in the film. The scenes featuring Barkan’s speeches are particularly striking. He continues to speak on the power of hope in spite of his speech difficulties. Watching Barkan speak becomes more powerful as the viewer is reminded that he is battling ALS and the oncoming loss of his voice. In a light-hearted scene that Bruckman describes as one of his favorites in the entire film Barkan smokes marijuana and eats a s’more. “It was just so funny and full of life and so real,” Bruckman said.
An Impactful Movement
Amid moments of protest and displays of activism, “Not Going Quietly” captures the sense of friendship and hope felt on the tour. The balance of these moments with Barkan’s struggles with ALS and the healthcare system make the film an authentic and real experience. There isn’t a scene in the film that feels far away or disconnected from the viewer. It’s able to educate and emotionally connect without becoming a lesson in activism or politics. The film balances evenly between Barkan’s journey with ALS, moments with his family and his campaign for healthcare.

The impact of the disability rights and healthcare justice movements in America are felt heavily in this film. It is both sobering and inspiring to see what Barkan and Bruckman have created together — along with many vocal activists who are people with disabilities themselves. “It’s really important that people with disabilities have been at the forefront not just of the disability rights movement but of the entire healthcare justice movement for a long time,” Bruckman said. “Ady stands on those peoples shoulders.”

“Not Going Quietly” is available to rent or purchase through Apple TV, iTunes or Amazon Prime Video.