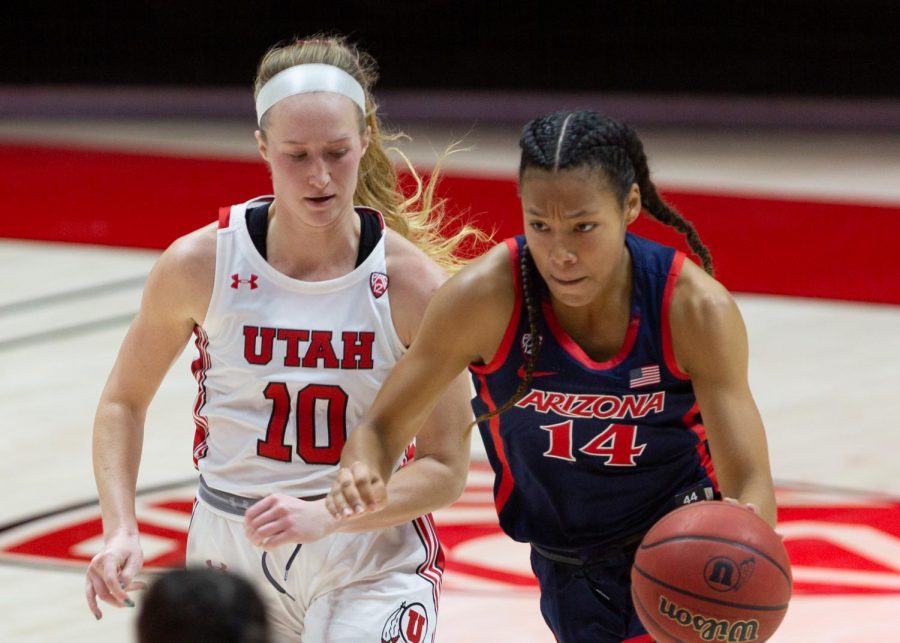 University of Utah women's basketball player, Dru Gylten (#10), runs alongside an opponent in the game against the University of Arizona in the Jon M. Huntsman center in Salt Lake City on Dec. 20, 2020. (Photo by Jack Gambassi | The Daily Utah Chronicle)

The University of Utah women’s basketball team is quietly taking care of business and building a resume worthy of NCAA tournament consideration.

Head coach Lynne Roberts’ squad came into the week riding the high of a four-game conference win streak with three more games on the horizon. USC came into the Huntsman Center to make up for a previous postponement. Then the Utes traveled west to take on No. 2 Stanford and the Cal Bears.

One of the best offensive teams in the country, Utah’s three-point shooting has been a thorn in the side of opposing defenses all season. Leading the conference shooting 36.7 percent from deep, the Utes have made 225 threes, 45 more than second-place Stanford.

The Utes also lead the Pac-12 with 13.8 offensive rebounds per game, 16.2 assists, offensive efficiency; all while scoring 79.2 points per game.

The regular season is winding down and the Utes need to make the most of the four games left before the Pac-12 conference tournament tips off in Las Vegas on Wednesday, March 2.
Southern California Trojans 69 – Utah Utes 91
The Trojans were able to keep the game close for about 15 minutes before the dam burst and the Utes ran away with a lopsided 91-69 victory.

Jenna Johnson used three old-fashioned three-point plays in the first half to help her score a team-high 14 first-half points.

With senior Dru Gylten unavailable due to injury, Inês Vieira and Isabel Palmer combined to score 17 points while shooting 6-13 from the field. More importantly, they piloted a spectacular team offensive performance.

Tonight by the numbers ⬇️

Kennady McQueen exploded in the second half, finishing with a career-high six threes and scoring 22 points on only eight shots.

Roberts said of the performance, “We didn’t play perfectly but certainly shared the ball well. We had 20 assists on 31 made baskets, and I thought our defense was pretty dang good. They just got to the free-throw line a lot. We need to adjust and make those adjustments. They have some incredible athletes inside, and I thought we did a good job. Everyone contributed to the victory today. This is a great win. I’m really proud of our team.”
Stanford Cardinal 91 – Utah Utes 64
The Cardinal showed why they are the second-ranked team in the country as they countered every Utah attack, finishing with a 91-64 win. Utah had won five straight coming into the game.

Utah struggled in two key areas throughout the game. Stanford out rebounded the Utes 37-28 while allowing only eight offensive rebounds, an area the Utes have taken advantage of often this season.

Gylten was scoreless but picked up three assists in her return after missing five games due to a hip injury.

The Cardinal also out-assisted Utah 22-8. Roberts has consistently preached ball movement this season and eight assists will not be enough to get the job done.
California Bears 75 – Utah Utes 80 OVERTIME

In overtime, freshman Gianna Kneepkens scored the final seven Utah points and blocked a shot in the final 90 seconds to give Utah the win.

Cal began the game with an 11-0 run before Utah scored. This first quarter finished with Utah trailing 22-11.

Like an Uno reverse card, the Utes turned the game around when they scored the first 19 points of the second quarter.

The Utes led for most of the second half but could maintain it as Cal closed with a small run to send the game to overtime tied at 68.

Overtime was Kneepkens’ time to shine. She scored nine of her game-high 21 points in the extra session. A three from McQueen accounted for the Utes only other overtime points.

Gylten passed a career milestone in the second quarter. With an assist to Dasia Young, Gylten became the fifth player in program history to dish out 500 assists.

Gianna Kneepkens came up big time for the Utes ‼️

“What a gritty win for us. Cal did a really great job competing today,” Roberts said following the win. She continued,  “We came out a little flat, looked tired, but had that 24-8 second quarter and held it down from there. Our defense in overtime was fantastic. We needed this win and I’m extremely proud of our players for finding a way on the road.”
Next Up
The Utes remain on the road, this time traveling to southern California where they will face the USC Trojans (3-9, 10-12) on Friday, Feb. 18. Tipoff is scheduled for 8 p.m. MST.